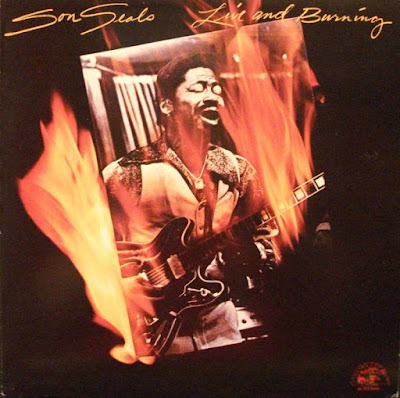 Live at Wise Fools Pub in Chicago. Covers of Detroit Junior's "Call My Job" and Elmore James' "I Can't Hold Out."

Just listened to this recording for first time in a long time. I was lucky enough to be there for one of the nights they recorded it at Wise Fools, my favorite north-side club - the reincarnation of it after it closed down was a disappointment. Son was always a performer you could count on to give it his all live; unfortunately too many blues artists in those days in Chicago were rather inconsistent in their performances. This was an excellent show and the recording is true to the vibe in the room. I have to agree with the other reviewers who note how Alligator overproduced the soul out of most of their artists in studio recordings. On the other hand, Bruce Iglauer had a lot to do with keeping an otherwise dying genre at the time alive and provide some meager income to a lot of deserving artists.
One of my long-time regrets about this album was the fact that Johnny Winter was a guest star for an amazing set with Son that night (seem to recall an incredible "Stormy Monday" version). From what I heard back when the album came out, Winter's record label (Warner Brothers?) wouldn't allow any of his performance with Son on little Alligator's album. Truly petty and truly disappointing. Anybody out there got a bootleg?...
Posted by Zen Archer at 3:29:00 PM 1 comment: 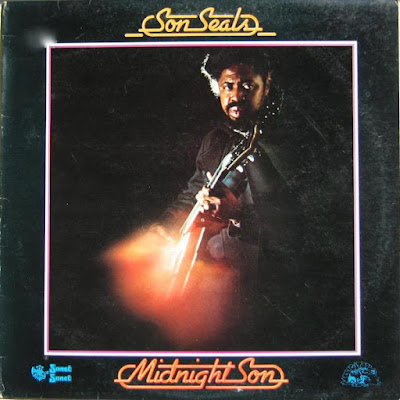 Armed with a huge, gruff voice and a searing, rough-edged guitar attack, Frank "Son" Seals was one of the finest blues and R&B-performers of the 60s and 70s Chicago scene, and this 1976 album, comprised almost solely of self-penned material, is one of his two or three best records.

He is backed by the standard four-piece band, second guitar, bass, drums and keyboards, and by a small, punchy horn ensemble (trumpet, trombone and a tenor sax). The interplay between the horns and Seals' gritty lead guitar is absolutely excellent, and just listen to that funky backbeat laid down by the rhythm section on songs like "On My Knees", "No, No Baby" and "Don't Bother Me"!

"Midnight Son" produced a number of Son Seals standards, songs which remained in his live repertoire for decades, and the arrangements are uniformly excellent. "Don't Bother Me" is propelled by a meaty horn riff and some rollicking R&B piano, and Seals gets off a sizzling solo, same as on the classic slow grind of "Telephone Angel" and the driving, up-tempo "Don't Fool With My Baby".

Other highlight include the up-tempo "Strung Out Woman" and the jumping soul-blues-stomper "Four Full Seasons Of Love"...but it really doesn't make sense to talk about highlights on an album which isn't anything but.
Get this one, along with his self-titled Alligator records debut, and the powerhouse "Nothing But the Truth", and take it from there! This is a fine, fine latter-day Chicago blues record.
Posted by Zen Archer at 3:19:00 PM 2 comments: