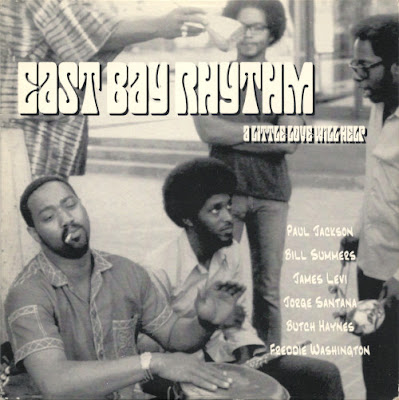 East Bay Rhythm's name may be a bit obscure to those not from the Bay area, but its key members -- James Levy, Paul Jackson, and Bill Summers -- were members of Herbie Hancock's legendary Headhunters band. The other main member, Butch Haynes, was a member of the fabled Afro-Jazz Quintet. These tracks were cut live and edited minimally. They feature Jackson on bass, Levy on trap kit, with Haynes and Summers on percussion along with a bevy of guests that include Jorge Santana (of Malo) and Carl Lockett, on guitar, Robert Washington and Fall on vocals, and bassist Freddie Washington on bass among others. Recorded between 1976 and 1980 at the Fantasy Studios in Berkeley, none of the eleven cuts collected here has been released in any form before. What is remarkable about East Bay Rhythm's sound is how rooted it is in various idioms: The deep funk of the middle 1970s, gospel a la James Cleveland, the roots of disco, and of course the wild yet precise, Afro-Cuban son rhythms that propel virtually everything here. What is also remarkable is to hear hand percussion in such overdriven funk numbers as "Accept Me," with its hypnotic guitar lines and slipping bass groove, the hand drums run amok on the inside of the mix. As the vocals fade form the center channel, Levy's syncopation careens under the beat as the hand percussionists ride herd over it. That this track is followed by the glorious instrumental, pre-disco anthem "Party Down," is such a plus here: Afro-Caribbean percussion drives not only the beats but the melody into turning on itself no less than three times before the bridge! The groove feels easy but is complex and stretchable with the cross-cross of rhythmic lines trading space in the center of the tune. Of course, this is just a sampling of what is available here over nearly an hours worth of music. This is the place where Tower of Power, Sly Stone, Roy Ayers funky material, and gospel music meet in a deep soul potboiler.

Miracles do happen. And the discovery of these recordings certainly is one. Although the band name may be unfamiliar to most, the musicians names behind East Bay Rhythm certainly aren’t. All of those who are fans of the Headhunters will recognize them as core members of that group. Tucked away on a dusty shelf for over 20 years lay the master tapes of the formation East Bay Rhythm. Thanks to a fortunate chain of events, we can now enjoy for the first time a brand new CD of these historic funk music documents. Drummer James Levi, Bassists Paul Jackson and Freddie Washington, as well as Percussionists Bill Summers and Butch Haynes along with the help of friends and guests such as Carlos’ brother Jorgé Santana of Malo, came together in a period between 1976-1980 to record six unbelievably funky tracks. The 11 re-mastered mixes of these songs were directly pulled from the mixing board on the respective day of the recordings and therefore reflect the full intensity, vitality and atmosphere of the sessions. It is almost a miracle that Herbie Hancock (who can be seen in the booklet munching on a sandwich at a visit to the studio) didn’t jump on the keys himself. It certainly is no miracle, though, that some of the recordings like the 8 minute long Jazz-Funk firework MUD RAT served as inspiration for his later work. BOOGIE CHILDREN and A LITTLE LOVE WILL HELP are serious Funk bombs; they don’t drop harder than that! ACCEPT ME and PARTY DOWN show the development from Funk to Disco, but even here the affinity for pure Funk dominates. Also pleasantly groovy is CHUDA, a psychedelic Cha Cha. Fortunately the label included both vocal and instrumental versions of the songs wherever they were available. After just one listen, it becomes quite obvious: Had these recordings been released 20 years ago, we would all have known them as long time classics in every funk collection. Lucky for us we catch up on that now. Indeed, miracles do happen.

This album will thrill any fan of herbie hancocks school of funk. the music is mostly straight ahead hard funk, there are a couple of not so good tracks but all the rest are 5 starworthy. Its a shame there arent more tunes, as three are included as vocal and instrumental tracks but thats life. The interesting thing is this stuff is recorded at the hieght of disco but it hasnt hurt them too much, they never add strings although they are obviously courting a slightly more commercial market than the survival of the fittest and straight from the gate albums.If you enjoy funk and have the aforementioned albums then this purchase is essential.(some of the best sound quality ive heard on a 70's funk album.Boogie children and a little love will help are danceable, technically brilliant and stanky as hell!

Jorge Santana
1979
It's All About Love 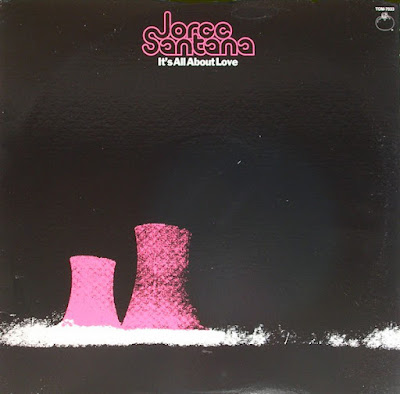 Want to get one thing out of the way to start off with. It was always slightly awkward even with his success with Malo (whom I should really get into more) that Jorge was going to end up being compared to older brother Carlos. So when he started a low key solo career in the late 70's,not sure how it was really received. But all the same both Carlos and Jorge are immensely talented musicians and creative personalities. They both seem to have an intuitive sense of the best musicians to play with,both live and in the studio. And both have a very strong sense of their vision. One thing to be said also is that Jorge never went out of his way to copy what his brother was doing. And that's one thing this 1979 album shows more than anything.

This is the work of a sextet including Jay McKinon,whose Alex Ligertwood sounding voice is the only element that could be compared to his brother. The sound is very stripped down in comparison,without the heavy latin rock element of Carlos preferring stomping and heavy funk such as the title song and "Ain't No",which along with the bouncy pop/soul closer of "It's All About Love" showcase Jorge's understated,bluesy jazz style guitar leads. "Feeling Good" and "New York New York" get into something of a disco-dance frame of mind and do so in a very funky,tasteful manner. The slower tunes "My Inspiration" and "Love Me Tonight" are sexy,midtempo numbers I suppose some might call "disco ballads". They are very soulful and jazzy though too.

Overall this is very impressive music. It has high pop and groove potential and functions as a great example of late 70's dance funk. It's a short album. But you feel as if you've really had a great experience after listening to it. The funk is sharp,lively and well produced and the more dance oriented numbers are done with a lot of class and soul. I don't really know much else about the Tomato record label (and it does have a cartoon Tomato on the record label by the way) but you do get a sense listening to this that the quality the two Santana brothers share,different as their ways of making music is,revolves around their ability to stay inside the groove and ride it as far as it can take them. Not to mention their ability to derive melodic ideas from the same place. Highly recommended. 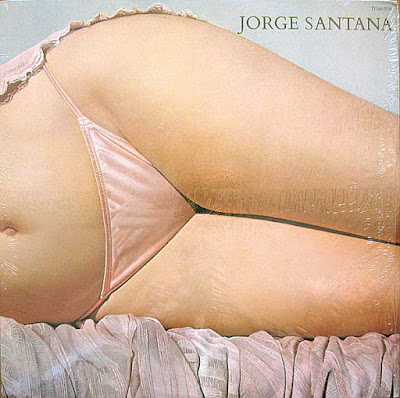 Malo continued to evolve over the course of four albums for Warner Bros. with a changing cast of members, including keyboardist Richard Kermode (formerly of Janis Joplin’s Kozmic Blues Band), singer/founders Arcelio Garcia and Richard Bean, and three members of the band Naked Lunch, among others. After Malo’s fourth Warner Bros. album, Ascención, was released, Santana performed with the Fania All-Stars at Madison Square Garden, then appeared on their 1974 album Latin-Soul-Rock. After that he took a break.

In 1978, the first Jorge Santana solo album emerged as a self-titled affair with most of the songs co-written with Malo alum Richard Bean, who also handled lead vocal duties. The song “Love the Way” was the breakout single, and the album made it onto the Black Album charts
Posted by Zen Archer at 12:18:00 AM 1 comment: