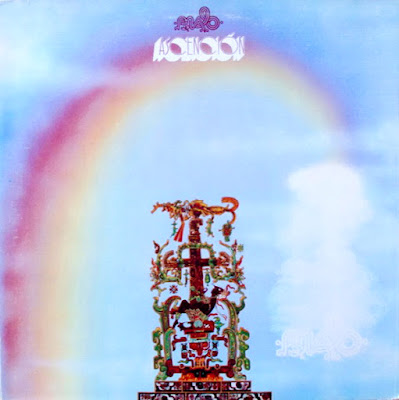 The fourth Malo album continued the drift toward pop that had begun ever since their debut, though it's still hardly a mainstream pop record. There was more material, however, that could make them seem something like a Latin rock band, hipper Chicago or Tower of Power, which is not the greatest of goal posts. New lead singer Willie Garcia, a veteran of recording who had done many records with underrated Latino Los Angeles soul-rock band thee Midniters in the '60s, was a key pivot to their direction, although it turned out to be the only album he did with Malo. The romantic, love-will-save-the-world lyrics got heavy-handed at times, and there was less of the jazzy, multi-sectioned riffing that had typified much of their prior work. Occasionally there was a funk pop tint, particularly to the keyboards, that seemed to be emulating then-current soul sounds by Stevie Wonder, Dr. John, and Billy Preston, though this did more to make Malo's identity less distinctive than it did to get them into the charts. Plenty of Latin roots, however, came through on tracks like "Offerings," which gives much room for speedy percussion and guitar soloing, and "A La Escuela." The album has been reissued on CD as one of the discs in Rhino Handmade's Celebracion box set, with the addition of single edits of "Love Will Survive" and "Think About Love." 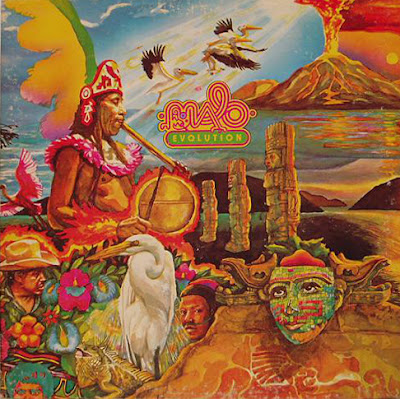 
Evolution was Malo's third album within a year. Perhaps because of that rapid pace and another shift in supporting players around the core trio of Jorge Santana, Pablo Tellez, and Arcelio Garcia, the band was starting to sound more formulaic and anonymous. There was a heavier reliance on fusion jazz keyboards and a lower fire in Jorge Santana's guitar than there had been on the band's initial two albums. It's still competent and often pleasing Latin rock/jazz, given as ever to lengthy but taut, well-structured instrumental sections. And there was, again, a soul-slanted romantic song that seemed more pointed toward the singles market than most of their repertoire, "I Don't Know." The most Latin-oriented facets of the band came to the fore on "Merengue" and "Dance to My Mambo," as their sappiest pop leanings did on "All for You." When set against tougher, funkier items like "Street Man," the band did not seem to be maintaining their eclecticism as much as starting to lose some of their focus. The album has been reissued on CD as one of the discs in Rhino Handmade's Celebracion box set, with the addition of single edits of "I Don't Know" and "Merengue."
Posted by Zen Archer at 8:08:00 PM 1 comment: 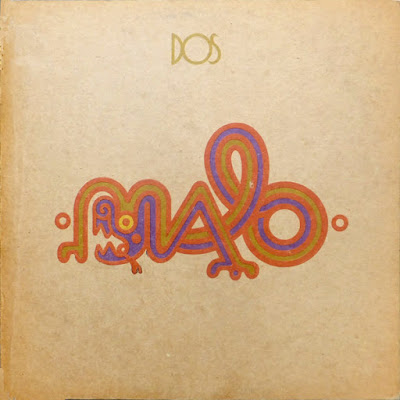 Malo's second album was cut with a lineup that had been reorganized following their debut. It's a little slicker than their first LP and the material isn't as strong. It's nonetheless a strong and invigorating rock/Latin jazz fusion, boasting some really hot playing, both in the ensemble work and improvisation. The six cuts, save one, all run more than five minutes, the closing "Latin Boogaloo" approaching ten minutes in length. Often this is closer to rockified salsa music than it is to the salsified rock music of lead guitarist Jorge Santana's brother, Carlos Santana. Occasional dives into sentimentality, as on the opening part of "I'm for Real," with its floating violin and percussive tinkles, are more than compensated for by some smoking Santana leads, particularly on the hyperactive "Held." "I'm for Real" was the cut most likely to follow up on the success of their "Suavecito" single, both because it was sung in English and because it had traces of the same kind of smoochy soul. Again, it wasn't too typical of the album as a whole, which combined several tributaries of pop with imagination and high levels of musicianship. Sometimes this was stretched out with jamming much more intelligent and fully thought-out than most lengthy, instrumental-oriented rock cuts, particularly on "Latin Boogaloo." The album has been reissued on CD as one of the discs in Rhino Handmade's Celebracion box set, with the addition of three bonus tracks, though those are merely edited single versions of songs on the LP.

Another great album by Malo they were at their best! Malo Dos kept the latin sound alive! Very talent group of musicians and their amazes me even now. Some albums put out one or two good songs and the rest are just there taking up time, this album is good from first to last. I enjoyed it in the seventies and I enjoy it now ( goes to show I was paying attention)! Anyone looking for that latin rock sound and awsome horn section and not to mention the rythm section this is it! Do It Man!
Posted by Zen Archer at 5:51:00 PM 2 comments: 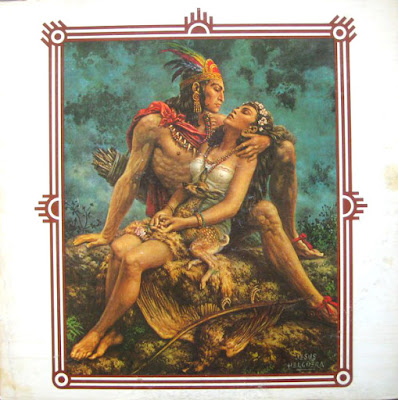 Recorded and mixed at Pacific Recording Studios, San Mateo, California
Additional Recording at Funky Features, San Francisco, California
Front Cover Credits: Reproduced with the permission of Galas De Mexico, S.A.
Note “We would like to acknowledge our special thanks to Coke Escovedo & Victor Pantoja for their beautiful feeling and contribution to this album.”—Malo
This album is dedicated to Linda Rogoff with our appreciation.

The youngest of three brothers, Jorge Santana had his greatest musical success as the leader of an early-'70s Latin rock band, Malo. Their self-titled debut album, released in 1972, included the Top Twenty hit, "Suavecito." Initially drawn to blues, Santana began playing guitar shortly after moving, with his family, to San Francisco in the early '60s. After playing with a four-piece high school blues band, he was invited to join the Malibus, a popular nine-piece blues band known for its horn-driven arrangements. The band, which evolved into Malo in 1971, featured former Janis Joplin's Kozmic Blues Band keyboardist Richard Kermode and trumpet/flügelhorn player Luis Garca. After recording Malo's final album, Ascension, in 1974, Santana performed, at New York's Madison Square Garden, as a special guest of the Fania All-Stars. The performance marked his last public appearance for three years as Santana retreated to his Mill Valley home, where he did little but eat, sleep, and play guitar. Although he released two solo albums -- Jorge Santana and It's All About Love -- neither sold well. Planning to take a year-long sabbatical from music, in 1982, Santana remained out of the public eye for seven years. Santana's return to music was sparked by an invitation to join his brother, Carlos's management company as director of artist relations. In addition to working on production, music clearances, and publishing, he toured with his brother's group. In 1994, the two brothers collaborated on an album, Brothers.

Malo were formed in San Francisco by ex-members of the Malibus and Naked Lunch. Led by vocalist Arcelio Garcia and guitarist Jorge Santana (brother of Carlos Santana), the band signed to Warner Bros. in 1971 and recorded its debut with David Rubinson, producer of fellow California-based acts the Chambers Brothers and Moby Grape, and a future close associate of Herbie Hancock. The album, self-titled, was released in early 1972 and was successful due to "Suavecito," a mellow romantic groove written by members Richard Bean, Pablo Tellez, and Abel Zarate that peaked at number 18 on the Billboard Hot 100. It became a low-rider classic.
Malo shed several members, including Bean and Zarate, and were unable to sustain that level of popularity. Dos, released later in 1972, and Evolution, released in 1973, were also produced by Rubinson and appealed to a declining crop of listeners who appreciated bold fusions of soul, rock, jazz, and Latin music. Both albums charted but sold poorly compared to the debut. Ascención, the final release of the band's first phase, followed in 1974 and continued the downward commercial trend, despite co-production from Fred Catero, who was known most for his work on Santana's Abraxas.
Later incarnations of Malo recorded and performed on a sporadic basis for the next few decades. Six albums were released on as many labels during the 1980s, 1990s, and 2000s. Meanwhile, "Suavecito" remained alive, included on numerous compilations and referenced in Sugar Ray's Top Five pop hit "Every Morning." Additionally, Rhino Handmade released ¡Celebración!: The Warner Bros. Recordings -- a four-CD box set that included all four Warner albums and single versions. Garcia continued to lead the band into the 2010s.

Malo's debut album remains their best and best-known work, primarily for the inclusion of the hit single "Suavecito." That track managed to make a Chicago-like pop-soul song sound hip with its smooth integration of Latin rhythms and irresistible "la la la" chorus. However, it represented just one facet of a band who, despite some expected similarities to Santana, played some of the most exciting and exuberant fusions of rock, soul, and Latin music. The six extended tracks (all clocking in at over six minutes apiece) leaned more heavily on hot Latin jazz brass than Santana did, though Jorge Santana himself generated plenty of friction with his burning electric guitar. It's not an exaggeration to state that by the time this came out in 1972, Malo's Latin rock blend sounded fresher than Santana's, if only because they sound hungrier and less formulaic than Santana did by that point. The Santana comparisons are unavoidable, though in this case it's to Malo's credit, as they too boasted a deft balance of improvisatory instrumental passages, solid multi-layered percussive rhythms, and emotional, romantic singing in both Spanish and English. The album has been reissued on CD as one of the discs in Rhino Handmade's Celebracion box set, with the addition of five bonus tracks, though those are merely edited single versions of songs on the LP.

At a time when brother Carlos turned spiritual and got ready to release Caravanserai, Jorge Santana became a member of this band, Malo. Malo, the debut album from 1971/72, continued with the formula from the first three Santana LPs which had made them world-famous: fusing Latin percussion, Rock and West Coast Pop. The album mainly consists of uptempo songs complete with wahwah guitars, excellent brass and percussion sections and great arrangements. Peace is a suite beginning with a heavy Rock vamp leading into a swinging Jazz improvisation by the trumpet; a quiet guitar improvisation leads back to the Rock vamp from the beginning.
Posted by Zen Archer at 5:28:00 PM 2 comments: