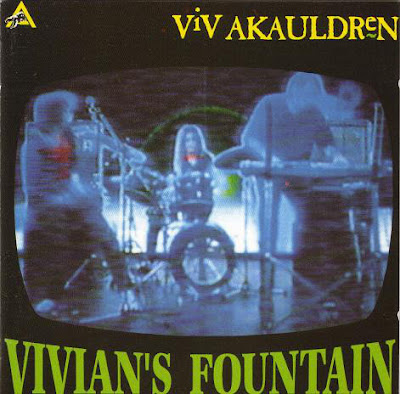 In June of 1982 vocalist/guitarist/bassist Jeff Phry, keyboardist Keir McDonald and Robert Wannacott formed a band called Trancegland in their hometown of Detroit. When Phry's girlfriend and soon to be wife Deb Agolli replaced Wannacott as the drummer, the band changed name to Viv Akauldren. The trio is one of the unsung heroes of psychedelic music. Their performances were legendary.
Old Bags & Party Rags (Akashic, 1985 - Resonance) offers progressive-rock in the vein of Gong that can be quirky and catchy (Censored), spaced-out (Life Expectancy), tribal (Catabolic Blues), and convoluted a` la Can (As You Wish).

After a live EP with The Titanic Mind, the band released their second album, I'll Call You Sometime (Akashic, 1987), a concept that pivots on spiritual themes, The ballad Along The Way and the world-music of The Chain demonstrate the eclectic nature of the music, but where the band truly shines is at the border between progressive-rock (Is This It, Inn'er Current) and minimalist/ambient music (the instrumentals The Maker Of The Sun & The Moon and Farrowbone). The album ranks as one of the unheralded classics of psychedelia.

The mini-album Witness (Resonance, 1988) is its alter ego: Hawkwind's hard-rock takes over and drives Eye Suck and the other catchy, aggressive tracks.

Magnolia and May As Well are the highlights of Vivian's Fountain (Resonance, 1990), an anthology of unreleased material ranging from the early days of Trancegland.

Upon returning from the British tour, in November 1989 the members split. Phry fell victim to drugs and disappeared from the music scene, and eventually relocated to Berlin, where he became a street musician. Agolli went on to form Hot Footin' Puddin' Pie and then joined Outrageous Cherry. 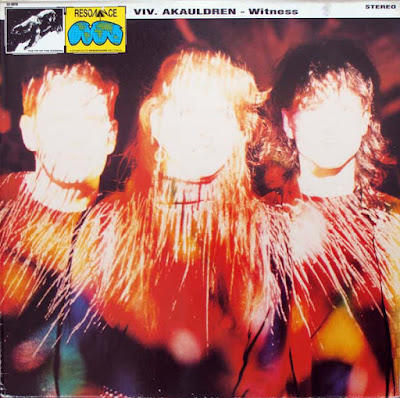 
Viv Akauldren were a fantastic three piece from Detroit that released four psych/space rock/punk albums during the mid to late 80s - one pretty solid debut, and three absolute classics. I still can't believe that only one of their albums, 'Vivian's Fountain', has been re-released on CD. There's been a terrible and unforgivable oversight here and if any distributors of top notch psychedelic rock are reading this, what are you waiting for? Snap those rights up!

Released in 1988, 'Witness' is Viv Akauldren's psych-punk album. Faster, louder, more fuzzed-up than their previous offering, the classic 'I'll Call You Sometime', it just grabs you by the throat and hauls you into the middle of a distorted, aggressive and very intense psychedelic wasteland. Jeff Tarlton's great rock vocals are screamed, spoken and whispered, acid guitars cleave your trembling mind in two, Keir Mcdonald's keyboards and electronica provide a suitably spaced-out backdrop, and Deb Agolli's wild drumming keeps things ticking over like a time-bomb about to explode.

Am I making it clear how much I love this band? No? Okay, let me put it like this - your whole life will have been a total waste of time if you never get to hear Viv Akauldren.
Posted by Zen Archer at 8:23:00 AM 1 comment: 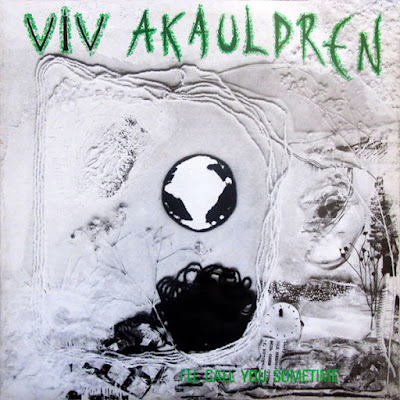 Viv Akauldren sprouted from the remnants of an early '80s Detrot combo, Trancegland, who amended their moniker after a roster shakeup in 1985.  A co-ed trio featuring axe-slinger Jeff Phry and drummer Deb Agolli mixing things up on the mic, Viv Akauldren brewed a subterranean alchemy in a cauldron (get it?) of their own warped design, purloining heavily from psych, but also inserting goth, and even folk flavorings.   I'll Call You's howling opener "Of," is full-bore intensity with all the subtlety of a Mack truck.  While there's precious little else here that's on quite the same frantic wavelength, Viv's sophomore effort tantalizes in varied ways on the distorto-pop pearl "Firewater," and the icy, noir "Inn'er Circle."  And maybe it's just me, but the sprawling spoke/sung "City Magic" strikes me as something of a template for Sonic Youth's "Eric Trip."  Hmmm.  The extensive liner notes in Viv's final album, 1990's Vivian's Fountain, imparts the following regarding I'll Call You Sometime.