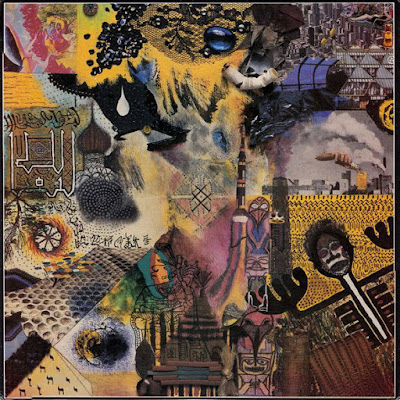 
Seriously great post-punk-prog-psych from this long and sadly forgotten 80s band. Sometimes floaty and droning, sometimes jagged and angular. It's kind of like what I wished Sonic Youth sounded like more often. Someone needs to step up with the reissues.

Viv Akauldren were one of the best American psychedelic bands of the 80s, who did not maintain the neo garage style typical of that scene, but were more comparable to British neo psychedelic bands. There were definitely contacts with American underground bands of that time, which then had great success in the alternative field in the 90s and determined the festivals. Viv Akauldren, however, remained true to their genre, remained in the musical underground and was an insider tip, which unfortunately never went beyond the corresponding fan circles. In June 1982, singer, guitarist and bassist Jeff Phry, keyboardist Keir McDonald and drummer Robert Wannacott found themselves in the band Trancegland in their home town of Detroit. A little later came with Phry ' s girlfriend and later wife Deb Agolli replaced Robert Wannacott as the new drummer in the band, which was also accompanied by a change of name to Viv Akauldren. The trio is still considered one of the great unknown acts of American neo psychedelic rock. Their performances were legendary, regularly degenerated into happenings and offered all kinds of weird performance interludes of various visual and acoustic types. The guitarist Jeff Phry, who was rather heavily rooted in the garage and psychosound of the 1960s, shared the vocals with the drummer Deb Agolli. Musically, the debut album "Old Bags And Party Rags", released in 1985 as a self-production, was a unique mixture of different freak-rock variations that went far beyond what was commonly imagined at that time under the generic term garage skirt. Viv Akauldren was hopelessly over the top in a positive sense. The band used all sorts of style patterns, reaching into the rock box, but also meandering in the typical Canterbury sound, maintained by Gong or Henry Cow. Progressive rock and spaced-out elements occurred with Viv Akauldren as well as the spontaneous turning down in volume and a related grip on the acoustic guitar, to get lost somewhere in the freak folk British form.

Their debut album "Old Bags And Party Rags" presented a lively band that felt pretty much at home everywhere, but who clearly had their own style that sounded very independent and, above all, sounded very uncommercial. While the catchy rock sound was still shown in the piece "Censored", the long track "Life Expectancy" sounded very space rock-oriented, while the "Catabolic Blues" even had tribal elements. They then sprinkled in a nuance of typical herb rock, best to listen to in the piece "As You Wish". This piece showed some arrangement features, such as can also be heard in the German Krautrock formation Can. What was special about the Viv Akauldren group: They understood it as few in their time, to tear the archetypal American garage skirt out of its stylistic isolation. While other typical representatives of this music were more oriented towards the beat and early rock of the 60s, Viv Akauldren added many other ingredients to her music, which were inspired by Krautrock, space rock and above all the experimental underground sound of the late 60s was. In any case, the band presented itself like this on their first album. Later the band went much further, however, by focusing more on an initially rather moderate punk attitude, which made the following three works harder and sometimes somewhat cacophonic, but still very exciting and extremely diverse. In this way, no 80s band did at the time, not even the British Magic Mushroom Band, which went a little bit in the same style at that time. Viv Akauldren were also much more uncompromising, searching and keen to experiment. It is quite possible that a missing big deal with a record label helped to preserve this undoubtedly existing magic in their music.
Posted by Zen Archer at 7:30:00 PM 1 comment: