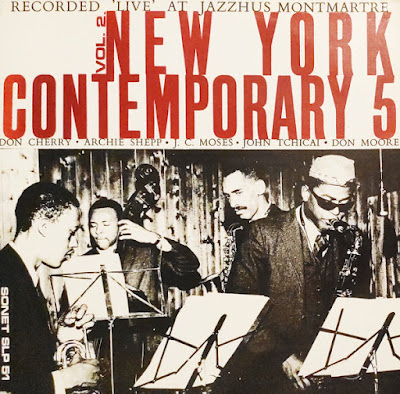 Although saxophonist Archie Shepp is listed as the leader of this release, The New York Contemporary Five was really a collective; a short-lived, free jazz super-group from the early 1960s. The band, with a front line of Shepp, cornetist Don Cherry and alto saxophonist John Tchicai, was recorded live at the famed Jazzhus Montmartre in Copenhagen, Denmark on November 15, 1963. Originally released as a two-volume set on the Sonet label,

One disc,75 minutes approximately. Remastered from the original tapes. Good delineation between the instruments with a clean sound. This disc comprises two vinyl releases which were recorded live, in 1963. This set is under Archie Shepp's name in hopes that it would sell more through name recognition than for the quality of music. The musicians,besides Shepp on tenor sax consist of Don Cherry-cornet,John Tchicai-alto sax,Don Moore-bass,and J.C.Mose drums.

The music recorded by this group is much more important than a lot of people realize. Their is a slight feel of Ornette Coleman flowing around this music,and not just because of Cherry's presence. The tunes are a combination of traditional jazz foundations on which the then "new thinking" was overlaid,which gives this set(besides good music) an importance much greater than this fleeting group. The tunes were written by Coleman,Monk,and several members of the group. Of particular note is the track TRIO,which is long(fifteen minutes or so)written by the trumpeter Bill Dixon. The sound of this track is different than the others,being in a modal style with varying meters. This gives this track a real identity and is one of the highlights of this set.

All the tracks were recorded live in Copenhagen,where this type of music found a welcome home. This group didn't last long,with several members moving to the U.S. Shepp stayed in Europe and recorded several albums. Some of the best were duo settings such as GOIN' HOME,TROUBLE IN MIND,and LOOKING AT BIRD. Listeners should not be put off with thinking this music is difficult to understand and enjoy. This is music that has a bite-but when it's over,you won't mind,because this set works it's way into your mind,and you realize you have heard something important on the long road of jazz.
Posted by Zen Archer at 4:29:00 PM 3 comments: 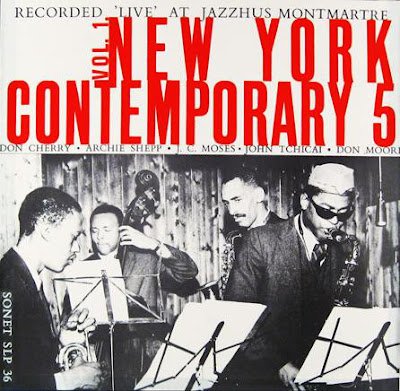 The New York Contemporary Five was an avant-garde jazz ensemble active in the first half of the 1960s.

It has been described as "a group which, despite its ... short lease on life, has considerable historical significance", laying "the cornerstone of what might be called the mainstream of free jazz".

The ensemble was formed around 1962 by Don Cherry, Archie Shepp, John Tchicai, Don Moore, and J.C. Moses. They released two albums in 1963 for Fontana and Sonet, and finally a split album with Bill Dixon early in 1964 on Savoy Records. The last record featured Ted Curson, Ronnie Boykins, and Sunny Murray in place of Cherry, Moore, and Moses respectively. The group disbanded later in 1964.

This historically significant LP has six selections recorded by the New York Contemporary Five on November 11, 1963. The short-lived group, which consists of cornetist Don Cherry, altoist John Tchicai, Archie Shepp on tenor, bassist Don Moore, and drummer J.C. Moses, was avant-garde for the period, influenced most by Ornette Coleman's Quartet; the participation of Coleman's cornetist certainly helped. However, Tchicai (although sometimes hinting at Coleman) had a different approach than Coleman, and it was obvious that Shepp had already developed his own original voice and was the group's most passionate soloist. Together this very interesting quintet (which would soon break up) performs pieces by Coleman, Thelonious Monk (there's a short melodic renditions of "Crepescule with Nellie"), Bill Dixon, Tchicai, Shepp, and Cherry. 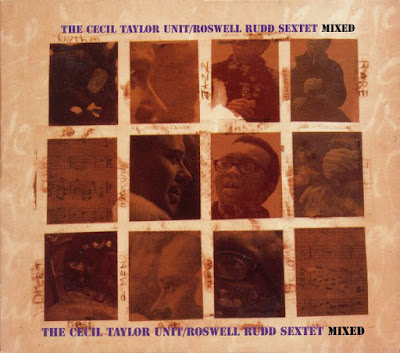 "Everywhere," "Yankee No-How," "Respects," and "Satan’s Dance" constitute a reissue of Impulse! [AS-9126], Everywhere, originally recorded July 8, 1966 in New York by the Roswell Rudd Sextet. "Bulbs," "Pots," and "Mixed" were originally recorded October 10, 1961 in New York by the Cecil Taylor Unit, and those tracks appeared alongside several unrelated tracks by members of Gil Evans’ orchestra on Into The Hot, Impulse! [AS-9]. The original liner notes by Nat Hentoff and Michael Cuscuna, respectively, are included in the accompanying booklet.
With stereo bowed basses setting the stage backdrop behind his full, expressive trombone tone, Rudd begins "Everywhere" wailing and moaning before inviting the full ensemble to join him. It’s a slow melancholy dirge that allows everyone to improvise while keeping the focus on Rudd’s solo voice. "Yankee No-How" contrasts with twelve minutes of group frenzy contained in a sphere of excited thoughts. Although the ensemble passes ideas from one to another, group cohesion is not as apparent as elsewhere. Resembling a pair of timpani, the basses thunder through "Respects" alongside the others, and combine with Rudd’s low pedal tones on "Satan’s Dance" for weird underworld effects. Three of the four Roswell Rudd Sextet tracks rely on group improvisation over any one individual voice.

Cecil Taylor’s ensemble had much in common with the orchestra music of Gil Evans. "Bulbs" has form and focuses attention toward the featured saxophone soloists, while "Pots" looks to the pianist for rapid-fire percussive streams. Opening with a brisk walking-bass pattern and transitioning to a modified swing rhythm, "Pots" contains a fair amount of excitement. "Mixed" brings a larger ensemble with a fascinating sense of direction and cohesion. At times sharing a unison melody or riff, and at times improvising simultaneously, the ensemble provides a meaty subject and an enjoyable rainbow of sound patterns. The album stretches from readily accessible material to avant-garde fringe jazz. Recommended.

A particularly strange album. This contains three tracks from the Gil Evans 1961 album Into the Hot, which, oddly enough, have nothing whatsoever to do with Gil Evans at all, but are instead a rather avantgardish performance by the Cecil Taylor Quintet (joined on one track by Ted Curson and Roswell Rudd). This is an energetic set, with some frantic piano work by Taylor and an electrified backing band featuring a young Archie Shepp in a wonderfully expressive mood.

The remaining tracks are from Roswell Rudd's 1966 album Everywhere. The thematic link seems to be Rudd's presence on one of the Taylor tracks, otherwise this is a lot more conventional, despite the presence of Robin Kenyatta, Charlie Haden and Beaver Harris. Rudd, who played with Grachan Moncur III in Archie Shepp's band at the time, seems to try to emulate Moncur here occasionally, but when he does so, he fails to conjure up the same dark emotionality that Moncur is capable of. It's still an interesting, if slightly unfocussed album.

The compilation feels a bit like an attempt to put the three excellent Taylor pieces into a better context than the misnamed "Gil Evans" album, but it still feels a bit arbitrary, and the great cover designs of both the Evans and Rudd album got lost somewhere on the way. Novices might be confused, and collectors may want the original albums, but musically this is nevertheless worth a listen.

The second part of the program, it's the entire Rudd's 1966 Impulse! "Everywhere" album. This set it's plenty of complex arrangement structures and fiery improvisations (there is a tribute to Eric Dolphy entitled "Respects"). Though Roswell Rudd never sounds like a Grachan Moncur III or a Curtis Fuller on trombone, your way to play it's exploratory and contemplative. The personnel joined to recorded that session was: Roswell Rudd, trombone; Robin Kenyatta, alto saxophone; Giuseppi Logan, flute and bass clarinet; Charlie Haden and Lewis Worrell, basses; Beaver Harris, drums.

This release, obviously, presents a confused recording session dates compilation, and, actually, the Cecil Taylor's Unit set appears on a 1961 Gil Evans album called "Into The Hot".
Too much content for an only one album, I think, but still a good stuff.
Posted by Zen Archer at 1:36:00 PM 3 comments: