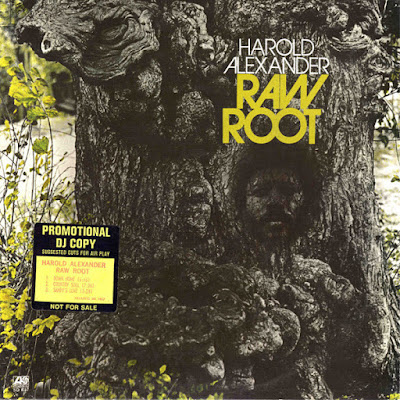 
Probably the weakest of Harold Alexander's albums, but still a real corker if you like flute rare groove stuff. This album is much more soulful and mellow, you don't get so much of that mad scat stuff he does on his first two albums, but more of a mellow groove throughout. Stand out tracks "Down Home" "Country Soul" & "Sandy's Love". This is the only release by Harold Alexander not on the Flying Dutchman label, and therefor not reissued. This makes it quite difficult to get a copy, but it is certainly worth the hunt.

Its title to the contrary, Raw Root is Harold Alexander's slickest LP and, perhaps as a consequence, his weakest -- embracing fusion sensibilities and slower, profoundly mellow grooves, it sacrifices the fervor of his previous Flying Dutchman dates, although the cosmic reach of his signature flute remains intact. Paired with a supporting cast including the great Richard Davis on bass and the aptly named Brian Breaks on drums, Alexander largely eschews the wild scatting that highlighted his breakthrough Sunshine Man in favor of a more subdued palette reminiscent of Herbie Mann's own Atlantic sessions -- it's difficult to shake the sense he's holding back here, and the fusion emphasis that dominates Raw Root's latter half further suggests that Alexander is repressing his more avant impulses in favor of a commercial approach.
Posted by Zen Archer at 1:18:00 AM 2 comments: