Harold Alexander
1972
Are You Ready 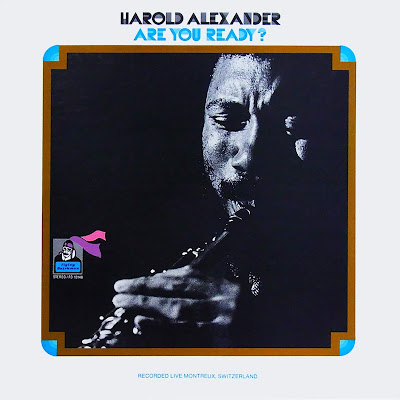 Recorded live at the Montreux Jazz Festival with a stellar backing band including bassist Richard Davis, keyboardist Neal Creque, and drummer Bernard Purdie, “Are You Ready?” further expands the cosmic jazz-funk horizons established by Harold Alexander’s seminal Sunshine Man. Comprising three epic performances, including a lively rendition of the stalwart “Watermelon Man” and the side-long funk jam “Quick City Revisited,” the album burns like a slow fuse– Alexander doesn’t create grooves so much as he inhabits them, exploring their nooks and crannies to embrace the full scope of their inherent possibilities.

Reedman Harold Alexander cut very few albums as a leader – and this is one of the best! You’re likely to hear Alexander’s work in the background on other sessions, but at the time of this record he was also a visionary leader – perfect for the open, freewheeling vibe allowed by the Flying Dutchman label – in kind of a fusion between earlier 60s soul jazz modes, and some of the spiritual currents of the time! Harold blows both flute and soprano sax here – on a set of long tracks that also feature lots of great work from Neal Creque on piano – himself another musician who only got a bit of time to shine in the spotlight around this time, after a great legacy with Pucho & The Latin Soul Brothers. Cornell Dupree also plays guitar on the album – which features just three nicely long tracks – the funky “Quick City Revisited”, a sweet cover of “Watermelon Man”, and a ten minute jamming take on “High Heel Sneakers”.

A real rare groove masterpiece.  Harold Alexander has this amazing skill of shouting whilst playing the flute, so you get this out-there scat thing going on.  All three tracks are an absolute pleasure.  I cannot recommend this album enough if you like rare groovy stuff.
Posted by Zen Archer at 6:53:00 PM 3 comments: 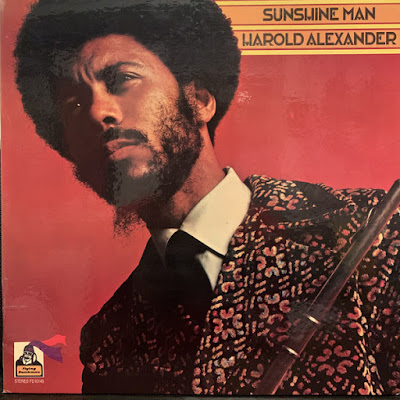 Harold Alexander was a competent saxophonist and dynamic flutist whose early and mid-’70s albums for Flying Dutchman and Atlantic blended originals, soul/jazz and R&B effectively. Alexander recorded three albums (including a live ‘Montreux Jazz Festival’ record in 1972) and contributed to various other recordings during his career.

After a very brief period of recording music, from about 1967 to 1974, Alexander disappeared from the music scene. He is alleged to have commented on the music industry by saying: Most people don’t know what happened to me…I guess they think I’m gone. They didn’t kill my spirit, but they killed my desire to share”. Before his removal from the scene of recorded music, Harold Alexander provided the world with some incredibly funky jazz fusion tracks with a distinct otherworldly craziness.

His most recognized LP is 1971’s Sunshine Man, on Flying Dutchman Records. On that album, the most sought after groove is the straight up banger “Mama Soul”, which features insane scatting over a delicious funky flute and organ driven beat. An immaculate six minutes of mental vocals and Alexander’s flute doing exactly what the vocals are doing. It comes as no surprise that “Mama Soul” was sampled multiple times by artists from ‘Blackalicious’ to ‘DJ Shadow’.

Another highlight (one of the many on this album) is the adept double beat from iconic drummer “Bernard ‘Pretty’ Purdie” (husband to Aretha Franklin & known for his work with Isaac Hayes, Cat Stevens, B.B. King & Joe Cocker) who is delivering some of the most tight and wicked drum-skills known to man. Bass duties here are filled by another icon: the award winning “Richard Davies” (known for his work with Miles Davis, Bruce Springsteen, Van Morrison, Frank Sinatra & Leonard Bernstein). Production of the album was handled by industry veteran “Bob Thiele” who produced & arranged countless albums from the likes of Art Blakey, Duke Ellington, Louis Armstrong, Quincy Jones, John (and Alice) Coltrane & Gil Scott-Heron.

Harold Alexander’s Sunshine Man is pure bliss, free-form Jazz with hints of soul and P-funk (courtesy of ‘Jimmy Castor’ collaborator Richard Landrum on the congas) to cosmic music with both profoundly spiritual and resolutely physical dimensions. Sunshine Man is that rare record that’s both far-out and funky at the same time.

Flautist and soprano saxophonist Harold Alexander, clad in the most of-that-era jacket anyone could possibly find, bringing P-funk to a smashing soul jazz mix, showing his worth and bizarrely not being remembered for it. The A-side is a kraut-paced jam. The form varies with its length, and by Tite Rope the context is a song-length one, which eases excitable human ears like mine into one of thee pieces of jazz capable of revolution. Yeah, Mama Soul. An immaculate six minutes of mental vocals and Alexander's flute doing exactly what the vocals are doing. The drummer is then revoltingly good at at punctuating the right parts in between. After I first heard the first line of this I had to file it under Potent Grooves, close to the so-potent-it's-moving Thème de Yo-Yo. For all his screaming it makes sense. After that's got out of his system, Aquilla is perfectly chilled. The flute melody forms a cogent path and I'd say it stands somewhere above being merely pleasant. All a little straight-laced (reliant on blues scales and a few clichés) when comparing it to the showstopper itself though, until Clean-Up comes in and reintroduces the better old themes. An immediate recommendation if you think you've heard it all.
Posted by Zen Archer at 6:33:00 PM 1 comment: 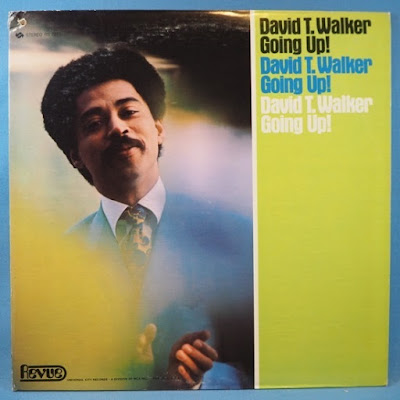 
A quick interlude in the current series of posts with the missing David T. Walker album that a regular visitor of the site just sent us!

A great bit of jazzy soul from guitarist David T Walker – one of the first albums he cut under his own name, after dozens of famous sessions for other artists! The orchestrations have a sweet large late 60s LA feel – with David soloing over the top in a tight style that has lots of warm chromatic touches. The tracks are mostly soul covers from the late 60's, but there's 2 nice originals, "Watch Out, Dynamite" and "Going Up" – plus the tracks "Can I Change My Mind", "Stormy", "Bad Bad Whiskey", and "Since You've Been Gone"
Posted by Zen Archer at 2:15:00 AM 2 comments: 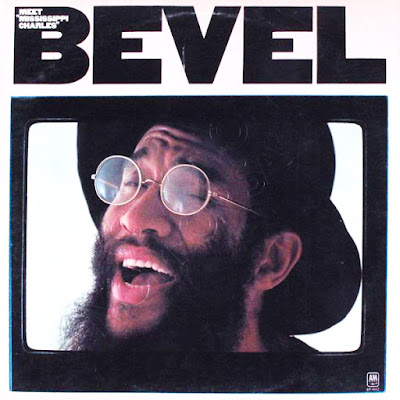 Mississippi Charles Bevel, multi-media artist and lecturer began his professional career in 1973. From 1973 through 1983 he performed intermittently as a musician, including a self terminated one year stint as a recording artist on the A&M record label. During that ten year period the most meaningful of those years of Mississippi were spent performing as a duo with another songwriter/performer, Chic Streetman. They also worked as an opening act for such artists as Taj Majal, Richie Havens, Hoyt Axton; Sonny Terry and Brownie Mcghee, Doc Watson, B.B. King, Third World, Albert King, Gil Scott Heron, etc

I was born the fourteenth of seventeen children, to cotton-plantation parents in the Delta of Mississippi.

For a time covering some thirty years after my birth, in periods of one month to less than two years, I had spent time in Mississippi counties like Sunflower, Leflore, Tunica and Choctaw; on cotton plantations like Joe Perry's and Joseph Pugh's; in small towns like Wier, Itta Bena, Swifttown and Greenwood. Then it was out of Mississippi and on to big cities like Memphis, St. Louis and Cleveland. And then, on to military bases in Illinois, Oklahoma, Tennessee, Hawaii, Japan, Kwajuluen Island, Midway, Alaska and California.

During those many years there was no one, other than myself, who could have borne witness to the artists gestating inside of me; artists barely kept alive, but who could sing, write, act, and create visual art. At thirty-one the musician was born; at forty, the writer; at forty-eight, twins, the actor and the visual artist. Giving birth to those mysterious personalities, my bumbling attempts at nursing those babies, was not only an unnerving disruption to my own life, but extremely confusing and disturbing to family and friends as well.

At sixty, there is some disquiet in my life, but hardly about death. Life has showered me with too much sweetness to leave me fretting over when death will appear to gather my bones. Any uneasiness is about the illusion of time; not enough time left to divulge my revelations; my mysteries. Not those places mentioned above or the people met along the way--the world is well acquainted with those places and faces. Sure, I've been to forty seven states and ten foreign countries. But do you really want to read another personal travelogue? How about some real biography; the feelings, the thoughts, the uncommon visions and singular experiences that we all have had but which few of us can find the courage to share. There is the powerful hope that someday through my "other children"-- those half nourished artists that I have given birth to--you will get to taste, see, hear, touch, smell, and even balance against your own, my mysteries--the real biography of Mississippi Charles Bevel.

An alone life, yes. But hardly a lonely one!

The 'Blues' does not mean black music. It means having the courage or audacity to speak to what is in your heart without consulting your head. That human attribute is colorless. But what is now termed the 'Blues' has to be placed in the context of the unique way in which this music form was derived. Its African roots cannot be denied, but most of its energy was and continues to be acquired from a people being forced to continuously live on the outer edges of the majority culture in America. From slavery, through legal segregation, to the many present forms of isolation, blacks have developed unique ways of expressing the constant pain and frustration that comes with being perpetually guaranteed. And since music is the easiest way to express matters of the heart, the 'Blues' (the pain and the joy, whether directed inwardly or outwardly) is, and will continue to be, the most persistent form of expressing matters of the heart in black culture in America.

Robert Christgau, one of the most enduring music critics said this, in part, about the album: [Bevel’s] songs are about black courage, hypocrisy, and ambivalence in a world shaped but not defined by racism; many of them ring like the proverbs and fables that provide him with crucial bits of language. The melodies are as sensible and eloquent as the lyrics, and Calvin Carter’s production respects and augments Bevel’s relaxed folk-soul voice. Christgau, predictably, is far more concise and eloquent than most, and who am I to disagree.
Posted by Zen Archer at 2:03:00 AM 1 comment: