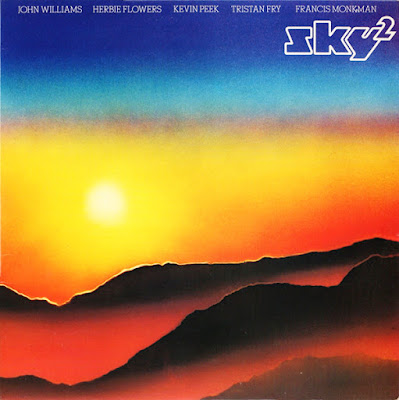 In the late '70s, a former CURVED AIR member -Francis Monkman- and an academic guitar player -John Williams, this one from Australia- joined to Kevin Peek and Tristan Fry to create an instrumental band able to mix classical music and rock: SKY.
Playing their own pieces and making traditional music covers, they've got compliments as well as criticals: Musicians were really virtuosos, but compositions were "light" and not innovative, and sometimes they were called a "MOR" band (Mature Oriented Rock, an euphemism to "Music for Old People").

As a reference for SKY's music, we can talk about EKSEPTION -a Dutch band who made, essentially, covers from classical pieces-, altough SKY was a little bit more "serious" in their arrangements (however, it's possible to find another rythms in "Sky 2", from jazz to ethnic music).

"Sky 2", the second effort from the band, is a double LP released in 1980. The original vinyl had a first disc with SKY compositions: "Hotta": Powerful opening with lots of percussion. "Dance of the Little Fairies": The album's gem, really beautiful and delicated. "Sahara": Changing piece that flows between energetic and soft moments, with some Middle East hints. "Fifo": Subdivided in four parts, this 17 minutes suite originally occupied the 'B' side of the first LP. It's the most "rockier" theme in "Sky 2", adding atmospheric touches too. It isn't the best of the stuff.

The following are short themes ('A' side in the second vinyl), but two brilliant pieces were eliminated from the original edition (I guess time reasons, but it's really sad, because both "Gavotta" -harpsichord delicatessen- and "Andante" -Vivaldi on acoustic guitar- could be situated among the best tracks). Remained alive: "Tuba Smarties": Composed by Herbie Flowers, where the band demonstrate that humour sense is possible even in the middle of "serious" music, with a tuba as the main instrument. "Ballet Volta": A traditional theme magically played with a classical guitar, another little gem. "Tristan Magic's Garden": This was the piece to be removed. Really, the weakest point that broke the nice classical atmosphere. Just percussions and vibraphone, boring and noisy. "El Cielo": Happily, this wonderful traditional piece returns to the listener the lost climax.

Closing the album, SKY reserved three excellent gifts: "Vivaldi": A classic in the band's discography, four minutes where Vivaldi's baroque music is played in a rock tempo (it was already played by CURVED AIR). "Scipio ( Parts I & II)": Composed by Flowers too, gives to the listener twelve very interesting and changing minutes. Not very complex, but really pleasant and with a fantastic end. "Tocatta": Another version from Bach's well known piece, very nice.

Summarizing, "Sky 2" is an excellent album, not complex but specially interesting for those who like classical music with rock rythms.

Most Sky fans regard this as the peak of the band's output, and with good reason. There are ver few weak spots here, which is unusual for a double album. I now have the CD release, but I will speak of "sides" because I first discovered this album in LP form, it being 1980. At the time I first encountered Sky's music, I was already a fan of John Williams' classical guitar playing, so this melding of classical guitar with prog rock was just what I was looking for, particularly at a time when bands such as Yes and Genesis were in decline.
The first side contains the high-energy Hotta, the charming Dance of the Little Fairies, and the intriguing Sahara. The second side (taken up entireley by the "Fifo" suite) is the weakest side, owing to the middle two movements. The suite is inexplicably titled "Medley" on the CD release, but the LP shows the correct title.

My favorite side is the third side. This is where the magic happens, for two reasons. The first reason is that the pieces here represent the solo talents of various band members. This approach was previously used on albums such as Yes's "Fragile" and Pink Floyd's "Ummagumma"; I don't know whether its use here is a conscious attempt to emulate those works or not. The second reason is that the mood on these pieces are much more introspective, a perfect foil to the faster tempos, higher volumes, and electric instrumentation of the other sides. My personal favorites on this side are the Ballet/Volta and El Cielo.

Finally, the more robust music returns on side 4, with "Vivaldi" (it is interesting to contrast this performance with the wilder original versions by Curved Air). Scipio isn't as powerful, but the non-stop appearance of new melodic material keeps a lot of momentum going (12 minutes worth). Finally there is the Tocatta. Of course, I'd rather hear this piece in its original form, on a pipe organ, but what we get here is a respectable rock rendition.

On the CD, I heard a slight hiss on quiter pieces, which is probably most noticeable on "Tristan's Magic Garden". Nothing too annoying.

Another curious bit of trivia: When the original LP was released in the US, it was released with the title "Sky", as if the first Sky album never existed.

The fact that a double album of instrumental music delivers so much good music, and so little filler, earns this five stars. The band's other albums just don't quite deliver as much, although the first and third albums have their charms.
Posted by Zen Archer at 11:00:00 PM 1 comment: 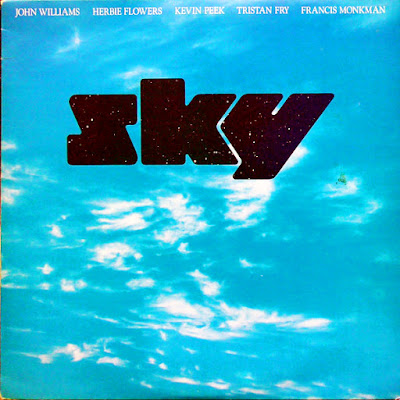 Track notes:
8: A-side of single released in August 1980
9: Previously unreleased. Recorded at "The Year of the Child" UNICEF Concert, Wembley Arena, London in November 1979. Broadcast by BBC Radio One on 2nd December 1979.

SKY is a British-Australian classic rock band formed in London in 1978 by classic guitarist John Williams (not to be confused with the American movie score composer of the same name), keyboarder Francis Monkman (of Curved Air fame), guitarist Kevin Peek, bassist Herbie Flowers and drummer Tristan Fry. Their unique style combined with the virtuosity of the individual members and easy accessibility of the compositions quickly gained them a huge and steady fan base. The absolute highlight of this era was a concert in Westminster Abbey in February 1981 (in fact the first ever rock concert there) which was video taped by BBC.

Unfortunately after only two albums Monkman decided to leave the outfit and he was replaced by Steve Gray. Grey's influence made the band sound more jazz oriented. After the third album audience interest gradually declined. After two more studio albums and a (excellent) live double album the band fell into oblivion.

The highlights in their discography ar certainly "Sky2", a double album with a broad variety of songs from very funny to virtually symphonic compositions. The other one is the above mentioned live album "Sky Five Live" on which every member of the band is able to show his prowess.

SKY was an interesting experiment: a group of session musicians, some with band experience (Francis Monkman from CURVED AIR and Kevin Peek fresh from working with DAVID BOWIE) collaborating with a highly skilled classical guitarist on what people at the time considred jazz/rock fusion. I first saw them on a TV jazz programme in the early 1980s, but by then I'd purchased their first two albums and had been converted to their sound.

They were far more than 'rock the classics' instrumentalists, though they were to do themselves a disservice with their fourth album, which contained little original music. This first album did have some well-known classical pieces, the best of them SADIE'S haunting 'Gymnopedie', but the highlights of SKY'S oeuvre were always their roriginal music, and here Francis Monkman was front and centre. The astonishing 'Where Opposites Meet', which takes up side two of the vinyl release, is essential listening, to see what can be done with a combination of classical and contemporary stringed instruments. It's entirely Monkman's composition, and I've heard nothing better. 'Westway' is the album's other highlight, a piece that nails their colours to the mast immediately: here we get splendid bass lines overlaid with playful acoustic guitar and harpsichord, underpinned by a driving beat.

It goes without saying that the musicianship here is outstanding. But don't mistake perfection for lack of passion. What we get here is subtlety. An excellent debut release, and well worth picking up - if you can find it.
Posted by Zen Archer at 10:43:00 PM 3 comments: