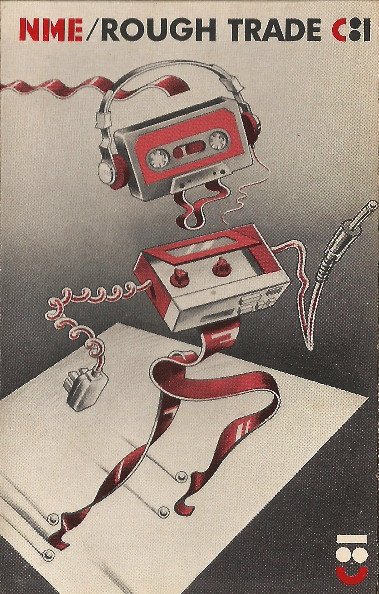 Track B13 is unlisted.

This version has a different tracklist to the subsequent commercial release through Rough Trade (Various - NME / Rough Trade C81), which substitutes A9 ('Raquel' by The Specials) and B7 ('Don't Get In My Way' by Linx) with alternatives. It also does not include the text: "This cassette began as a mail order only offer through the NME. Two tracks (marked **) are new, due to contractual obligations. Many thanks to the NME for their efforts."

The following texts appear on the inlays of both versions.

The special care with which these cassettes are manufactured is your guarantee of optimum sound quality and of musical reproduction close to the master tape. All our cassette mastering and volume productions was handled by Alan of Tape To Tape Duplicating, phone No. 01 388 5392.

DAF appear by the incredibly kind permission of Mute Records. Orange Juice, Aztec Camera and Josef K are all on the Postcard label. Buzzcocks appear to be part of the of the EMI Leisure Combine; Ian Dury appears courtesy of Stiff Records; Wah! Heat appear couresty of Inevitable Records, and Subway Sect appear courtesy of Oddball.
All the rest are on the Rough Trade Label 221 - 1100."

C81 was a cassette compiled for the British music paper NME in 1981 (hence (C)assette 81) and released in conjunction with the record label Rough Trade. Featuring a number of contemporary musical acts and performers, it was intended to mark the first five years of the independent label movement in the UK record industry and Rough Trade itself. It was the first in a series of many cassette releases from the paper, including the C86 compilation of 1986.

C81 was compiled by NME journalist Roy Carr, and Christopher Rose, who worked in public relations for Rough Trade. To obtain a copy, NME readers needed to collect two coupons from the magazine and send off £1.50. The first printed coupons and advertisement for the cassette were in the issue dated 31 January 1981. By the time C81 went on general sale at the end of May that year, 5,500 copies had been sold through the coupon offer, which represented a "big commercial success" according to Carr.

The tape contained a set of 25 diverse tracks ranging from post-punk (Red Crayola, Essential Logic, D.A.F., The Raincoats), jazz (James Blood Ulmer), poetry (John Cooper Clarke), ska (The Beat), electronic (Cabaret Voltaire) to veteran 'Canterbury Scene' performer Robert Wyatt. It was accompanied by the 'C81 Owner's Manual', a 32-page booklet of lyrics and artwork that readers would assemble themselves by cutting up and folding a page from the tabloid sized magazine. This consisted of 16 small double sided panels, and was designed to be slipped into the cassette case. A running joke throughout the booklet was the comparison of a number of acts on the tape to various periods in the history of The Velvet Underground.

When C81 went on general sale in May 1981 Chrysalis Records refused to re-licence the tracks by The Specials and Linx, and these were then replaced by Panther Burns and Television Personalities

Publishing a tape was an acknowledgment of the flourishing self-published cassette culture of the time that the NME had been supporting during its short lived Garageland column.[citation needed] An alternative view, however, was that the C81 cassette was more akin to 'bandwagon jumping', drawing on the enthusiasm and momentum of the cassette culture movement and using this as a promotional tool, whilst failing to acknowledge that movement, and ignoring its inherent critique of the established music industry. British music writer Simon Reynolds called it "post punk's swan song", noting the appearance of three acts from Scottish independent label Postcard Records and the emerging new pop tendency of bands such as Linx and Scritti Politti, and that NME stopped publishing the Garageland column in the very same month that C81 went on general sale, an acknowledgement that the DIY cassette culture movement was on the wane. 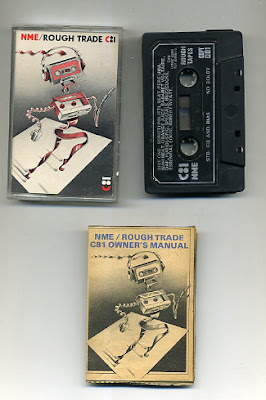 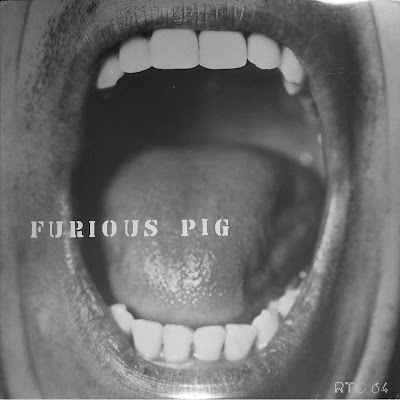 Play at any speed

In the words of Stephen Kent:

"Furious Pig was a group that emerged out of the High School experiences of a group of friends and relations in Totnes, a little town in South Devon, England. Influenced by listening to an eclectic mix of early Frank Zappa, Captain Beefheart, The Beatles, Ethiopian Polyphonic chants, The Doors, Stravinsky and Edgar Varese, among other things, we moved to London in 1979 a year after reaching the final of the National 'Melody Maker' Rock/Folk Contest - an event at which the judges included Bob Geldof, Justin Hayward [of the Moody Blues] and Ray Coleman [editor of Melody Maker]. Needless to say Furious Pig didn't win with their stirring renditions of 'I'm Going Round the Bend' and the jarring 'In Order of Height' but Bob Geldof said we'd 'Gotta Lotta Bottle'[Nerve] playing what we played. Squatting in houses around North London we developed a form of intense acapella vocal chanting, highly orchestrated with choreographed passages. It became a cult sensation on the London and N.European club scene. We toured on the bill with bands like This Heat, The Raincoats, Pere Ubu, The Slits, The Fall, The TV Personalities. We played on the streets, in clubs, pubs, schools. At the Comic Strip in Soho we were a regular music act - playing alongside all the comedians who became 'The Young Ones' and 'Absolutely Fabulous' on TV. We scored a live soundtrack to a William Burroughs book, 'The Wild Boys'. Our session on Radio 1 DJ John Peels show so divided the listenership between those who loved and those who loathed our music that it was repeated in record time. We'd spend 8 hours a day for months working on extending our vocal ranges, often in grotesque and hilarious ways - we had fun! Rough Trade Records got us into the studio and we recorded a vocal set including versions of 'I Don't Like Your Face', 'Jonny So Long' and the 'Kingmother'. I always regretted not recording 'Frozen Tarzan' with its alternating Shouting Through Cardboard Tubes and simply Shouting choreography and its Rolling On The Floor section. However, tapes do exist......

Furious Pig came to an end when I left to become MD of Circus Oz in Australia. However all the other band members continued recording careers: Martin Kent aka Martin Pig with a series of singles on Rough Trade and Dominic Weeks and Cass Davies with two full length LP's on Recommended Records: Het - 'Lets Het' and another with french chanteuse Hermine."

This is an ensemble of male vocalists from England who created their own eccentric concept of experimental music using only voices, even though there was a fair amount of existing work in this vein, mostly in the academic world (e.g. Joan LaBarbara), but also stuff like Linda Sharrock and Jeanne Lee.  This has a grass roots punk/cabaret/comedy aspect and offers both fun and musical substance. They clearly worked out a lot of creative, rehearsed parts for these maniacal songs, so it's not just some guys acting goofy. I'm a big fan of this general area of music involving unusual vocals and this is pretty awesome, but it's not an elite classic in my book because some of the vocals are a bit annoying and harsh (as in yelling). Also, there's other stuff in the same vein that's a lot better, particularly Five Men Singing (Blonk/Makigami/Dutton/Minton/Moss) and the Tatsuya Yoshida stuff. "I Don't Like Your Face" has a large section based on Balinese kecak, which is always a good thing!  There are connections between this project and other important early 80s creative music from England like Het and Hermine Demoriane. They played on bills with This Heat, etc.  It's a fabulous slice of underground music history.

When I first heard this, my initial thoughts were WHAT(THE FUCK) IS THIS I DONT EVEN. Like seriously, can I even consider this music. Or is it really just a bunch of drunks making random sounds and passing it off as music knowing that there's pretentious faggots out there who will praise it for being "something different" and call it art. Whatever the case, I made it through its entirety and had my mind blown repeatedly. I'm still not sure what I think of this. it all and wasn't sure what to think. But what the hell, I'll give it a 3 just because. I'm not even sure if I like or hate this or if I'm indifferent to it.

A friend said upon hearing them for the first time:

"...it’s like The Manhattan Transfer went insane and recorded music in the plough of the sicker Fugs, dis-harmonizing cries and yelps in a studio with windows left open toward the farmyard."