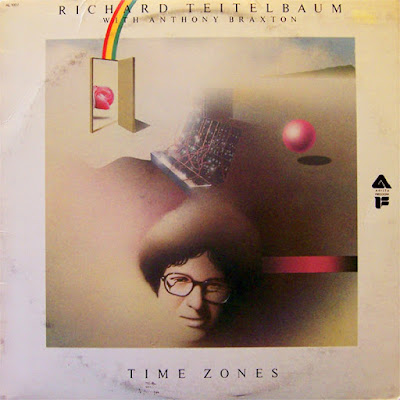 Side one recorded live in concert on June 10, 1976 at the Creative Music Festival, Mt. Tremper, New York and mixed at Sound Ideas, New York City.
Side two recorded on September 16, 1976 at Bearsville Sound, Woodstock, New York.


Richard Teitelbaum, an electronic artist, keyboardist and composer who combined an interest in non-western musical languages with a focus on experimental practice, died on Thursday at HealthAlliance Hospital in Kingston, N.Y. His wife, the classical pianist Hiroko Sakurazawa, said the cause was a major stroke. He was 80.

Teitelbaum was a pioneer in electronic music: Near the outset of his performing career, in the mid-1960s, he created what became known as "brainwave music," after pressing inventor Robert Moog to adapt his company's modular synthesizer to use neural oscillations as control voltages.

Teitelbaum became the first person to bring a Moog synthesizer to Europe, where he incorporated it into performances with Musica Elettronica Viva, a group he formed with partners including the composer Alvin Curran and the pianist Frederic Rzewski. The ensemble would sometimes use the biofeedback of audience members — not only brainwaves but also electrocardiograms and other signals — to create musical output.

He made use of the process in a 1968 composition called "Organ Music," with soprano saxophonist Steve Lacy and vocalist Irene Aebi. Musica Elettronica Viva incorporated Teitelbaum's biofeedback techniques around the same time, in a piece called "SpaceCraft."

Teitelbaum was also ahead of the curve as a musical globalist: In 1970, while studying ethnomusicology at Wesleyan, he formed the World Band, an improvising collective of master musicians from the Middle East, the Far East and India, as well as North America.

Separately, he made a deep study of the shakuhachi, a Japanese bamboo flute; "Blends," a shakuhachi piece he composed in 1977, finally saw release on an album by that title in 2002. (The Wire put it on that year's list of the best classical releases.) He also worked extensively with computer-assisted pianos and interactive software, notably on a 2013 album titled Piano Plus, featuring Rzewski, Ursula Oppens and Aki Takahashi as well as himself.

Improvisation was often at the center of Teitelbaum's musical output, though he qualified what that term meant: "For many years, my approach to the art of musical improvisation has been concerned with developing and realizing the musical potential of one's unconscious mind," he wrote in an academic paper for Contemporary Music Review.

He found common cause with some of the leading composer-improvisers of the post-1960s avant-garde. "I'm not a jazz musician, I have no pretenses about that," he told me in 2016. "But I've played with a lot of jazz musicians — though some of them don't like to be called that, like Anthony Braxton or Roscoe Mitchell or George Lewis."

The three artists he named, prominent members of the Association for the Advancement of Creative Musicians, share a dedication to original music ungoverned by convention and all-but beyond classification.

Teitelbaum had the closest association with Braxton, with whom he made a number of albums, beginning with Time Zones in 1977. Among his other improvising partners were violinist Leroy Jenkins, bassist Joëlle Léandre and pianist Marilyn Crispell.

"He was very sensitive with electronics," Crispell tells NPR Music, "particularly in the early days, when a lot of people were just blasting things as loud as they could." Her 2018 album Dream Libretto, with Tanya Kalmanovitch on violin and Teitelbaum on electronics, is his most recent recording credit.

Teitelbaum also had a long history with master drummer Andrew Cyrille, with whom he recorded a duo album, Double Clutch, in 1981. Cyrille's 2016 release The Declaration of Musical Independence features guitarist Bill Frisell and bassist Ben Street along with Teitelbaum on acoustic piano and synthesizer. The results, including Teitelbaum's short piece "Herky Jerky," suggest a more "inside" track for him, though he sounds entirely like himself.

Richard Lowe Teitelbaum was born on May 19, 1939 in New York City, to David Teitelbaum and Sylvia Lowe. He took piano lessons from age 6, and heard his share of jazz; in an interview with Kurt Gottschalk for The New York Jazz Record, he recalls sitting in the balcony of a Times Square theater for a Louis Armstrong concert, "and thinking it was the loudest music I'd ever heard."

Teitelbaum was already enamored of the avant-garde composer and conceptualist John Cage when he enrolled as a music major at Haverford College. There he studied composition with Mel Powell, and music theory with Allen Forte. He also met the towering composer and music theorist Henry Cowell, who sparked his interest in traditional Japanese music. (Teitelbaum would later become an executor of the Cowell estate.)

Teitelbaum earned a masters in music from Yale, and in 1988 he joined the faculty at Bard College, where he served as Director of the Electronic Music Studio. He won a Guggenheim Fellowship in Music Composition in 2002, using it to create Z'vi, the second in a projected trilogy of operas inspired by Jewish mysticism. Among his other classical works was "Concertino for Piano and Orchestra," which he composed for Sakurazawa and the Woodstock Chamber Orchestra.

In 2017, to commemorate the 50th anniversary of Musica Ellettronica Viva, Teitelbaum joined Rzweski and Alvin Curran in a concert tour that included performances at National Sawdust in Brooklyn and the Big Ears Festival in Knoxville, Tenn. The group also released an album, Symphony No. 106.

For all the cerebral dimensions of his music, Teitelbaum kept his work rooted in sensory experience. In a paper titled "In Tune: Some Early Experiments in Biofeedback Music (1966-74)," he recalls the original performance of "Organ Music," which incorporated Lacy's brainwaves and Aebi's heartbeats.

The concert took place in an auditorium in Milan with speakers surrounding the audience — "so that one felt as if seated in the midst of a shifting storm of bio-electrical activity," he wrote, "a feeling analogous, perhaps, to being inside a living heart and brain."

Richard Teitelbaum, the enduring American avant-garde figure and synthesizer pioneer, has died at the age of 80.

Few musical instruments have gone through the entire transformation that the synthesizer has. These days, digital sample based synthesizers are used to accurately reproduce anything from symphonic orchestras to percussion ensembles from every corner of the globe. Such was not the case in the 60s and 70s when the synthesizer was a barely controllable bundle of wires and circuits incapable of sounding like anything but its own primitive self. Much like the hollow reeds and log drums of the ancient world, the early electronic synthesizer in its most naïve state offered new musical possibilities to creative minds. One such creative mind was Richard Teitelbaum, who made brave attempts to make the difficult studio-bound synthesizer an expressive live instrument to be used in free improvisational settings. Teitelbaum is one of the very few to attempt this sort of improv in a jazz setting and the LP “Time Zones” is an excellent recorded document of a couple such ‘jam sessions’ with leading avant-garde woodwind master, Anthony Braxton.

Braxton is an excellent choice to help try and pull off this difficult feat of a live improvisational mix of an acoustic instrument and analog electronics. Braxton’s ability to draw electronic type sounds out of his various woodwinds goes a long ways towards making the two performers blend. Basically this album is made up of two performances; “Crossing” (side 1) is played in front of an audience in a reverb heavy church with Braxton playing high pitched alto and sopranino sax, while “Behemoth Dreams” (side 2) is performed in a studio with Braxton on the massive contrabass clarinet.

The success of this record is dependent on how well the performers pull off the difficult task of giving their two seemingly oblique instruments some way to blend, and how well they maintain musical interest while improvising. I think many would not have been able to pull this off, but Anthony and Richard do a remarkable job, particularly on side one, of making this succeed due to their thoughtful and careful interactions. Despite being a 70s avant-garde jazz record, much of this album is rather quiet, but don’t doubt for a second, when Anthony Braxton decides to bring the noise, he make a woodwind instrument sound like a herd of screaming monkeys.

This album is very much a product of its time, both in its odd instrumentation and in its bold and naïve approach to improvisation. If you like 60s/70s avant garde music, as well as the almost kitsch like sound of early electronics, this album holds up well against others such as Mario Davidovsky’s composed duos for synthezizer and acoustic instruments. Although this improv is a success given the daunting task at hand, still, it does require a relaxed state of mind to enjoy this sort of lengthy improvisation between two instruments, no matter how creative the performers, its hard to avoid some moments of stagnation
Posted by Zen Archer at 5:16:00 PM 2 comments: