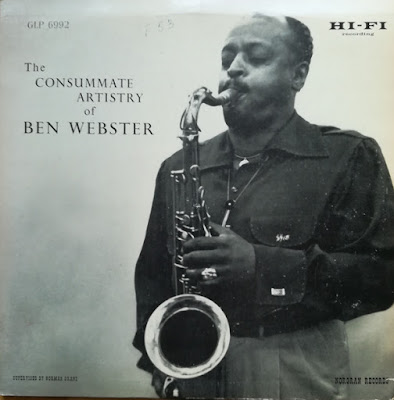 In the summer of 1980 still fresh from all the horrible things that happened that spring in Havana, my mother and I traveled to the Netherlands to spend the summer with my grandparents in The Hague. When we arrived at their home, fresh cup of tea in hand my grandparents presented me with a welcome present... A Walkman! As a 12 year old boy I was happy as a tick on a fat dog! My own personal stereo! My grandfather still had no idea what kind of music his grandson was into at that moment, Deep Purple In Rock and Black Sabbath's first albums would not get back into their homes until a couple of days later, but I digress... The old man didn't know what music to add to the Walkman for me to learn how to use it, so he ran to his study room  and came back with a cassette that had Deodato's Second on one side and Ben Webster's first on the other side telling me "One side has stuff youngsters used to like not so long ago and the other had one of Grandpa's favorite musicians". When everybody went to bed I must have listened to that tape five or six times, mind being blown by the clarity of the sound of the music coming thru' headphones. So here we stand quarantined and sharing music and stories almost four decades later, the old Walkman is still alive and well at my parents house, mom still uses it every now and then (Fuck! They don't make shit like they used to anymore!!) so does the tape because my dad enjoys listening to the Deodato side of it. A CD copy of Ben Webster's first safely resides with the rest of my collection here in Amsterdam. Why all this story telling? Today my Grandfather would have been 99 years old. He led an interesting life,  survived the Second World War with a wife and a couple of small ones reasonably unscathed, fought the Dutch for independence, smuggled weapons, printed newspapers in exile, His picture even appeared in Life magazine in 1949 with a small interview (One of my prized possessions!) he later became a diplomat and that came with another thousand stories he would tell me while as a kid I sat in his work room listening to post war Jazz and Big Bands from the war years. Reading and listening to music where important parts of forming one's culture, so he never hesitated in either getting me one or another when I was a kid, I am sure he had some sort of opinion about the long haired freaks on the covers of the album (and the scantly clad ladies) but he never voiced them directly to me. So today I the old man would have been 99, I give Ben's first another spin and remember how his room smelled when I was a kid and he told me all those great stories about his life and the life of others he considered great(and not to forget, the great battles of the South Pacific). In case you wonder, ciggies, coffee, books, LP's and old socks that's how it smelled. I hope that the beloved band of brigands that usually makes it's way to my corner of the net will also enjoy this album which in some way was the start of all of this. Happpy birthday old man we miss you. 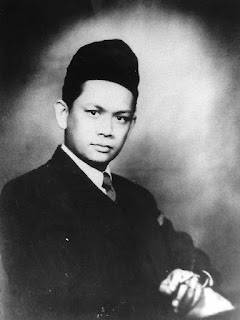 Izak Mahdi in all his youthfull cool

Recorded over two sessions in 1953 with a mix of personnel for both but Oscar Peterson is on piano with Ray Brown on bass present right throughout on what could be considered Ben's debut album, "King Of The Tenors". Yes it is his debut but after all the years with Duke Ellington and playing beside his mentor Johnny Hodges he is an old hand by this time. Tenor saxophone tones are what make Jazz such an interesting listen as with many other brass and woodwind instruments due to the fact the great players are indentified are soon as they put they're horn to their mouth because they have they're own sound and Ben Webster's tone is unmistakeable with that coarse, rough sound that emanated from his tenor and another bonus is Ben could play a ballad like no other with a beautiful warm and most important of all emotional approach. All the musicians from both sessions were playing in Norman Granz's, Jazz At The Philharmonic at the time of the recording and that familarity was brought to the two sessions with a seamless gorgeous album being created. Harry "Sweets" Edison is on trumpet for four of the ten numbers with Herb Ellis, guitar, Benny Carter, alto saxophone and Alvin Stoller, drumming in five tracks and the other session is reduced from a septet to a quintet with J.C. Heard drumming this time around with Barney Kessel replacing Herb Ellis on guitar and Harry with Benny on horns dropped. Norman Granz supervised the recording giving that classic Jazz sound that many of his recordings comprised stretching right back to those early Kansas City Big Band days with Lester Young which is exactly where Ben Webster started in the early 1930's.

"Tenderly" is the opening number with "Sweets and Benny dropped from the septet(who are there for next three, following) is an old standard that Ben played during his time with Duke Ellington and Ben comes in first with his coarse breathy blues sound right throughout during this old waltz that was put to 4/4 time. Ben was nicknamed "The Brute" but even so he wrings this one right out with a stunning interruptation and plays right throughout. "Jive At Six" is right on the title as it does jive with Ben coming in first, big and bold as usual with Harry "Sweets" Edison laying down great mute with his trumpet and then Ben storms back taking his sax right to the limit but always keeping perfect space so every note with every beautiful coarse nuance comes through loud and clear. Here is another old standard co-written by Ben's former associate the Duke himself with "Don't Get Around Much Anymore" with Ben putting the compostion down superbly never straying too far with always perfect interrupatation. The ballads are something else when Ben played them and one can hear that light breathy approach that Lester Young played them with and Ben is exactly the same, as it was in the Young Family Band with Lester that Ben played early in his career. "Poutin" is one of Ben's own compositions and a great Blues jaunt with Ray Brown's Bass keeping time right under that tenor of Ben's. The record flip starts with "Bounce Blues" another Ben composition with Harry "Sweets" Edison playing some stunning muted trumpet for his solo folllowed by more stunning musicianship when Barney Kessel gets a shot on guitar but Ben's tenor is big and bold and it keeps you right on him. "Pennies From Heaven" with "Cottontail" are Ben's bread and butter with more top shelf standard Jazz maintaned and one last interesting point on the album is Ben Webster's take on the old Celtic folk song "Danny Boy" which I will add I do prefer the folk approach but Ben still gets his money's worth with the tune and unlike Count Basie's later take does not make hash of it.( Sorry Count).

There is an alt take of "Billie's Bounce" added to this LP release which was not on the original. Oscar Peterson is superb right throughout and when one looks back you could say that he ran Verve Records house band and this is how I love Oscar the most when he did all those classic studio sessions in the fifties behind so many Jazz greats which he, himself is today. Essential Jazz that anyone, Jazz fan or not will like. King of the tenors I will leave that for you to decide but Ben was his own man with his own beautiful gruff but yet, so tender sound