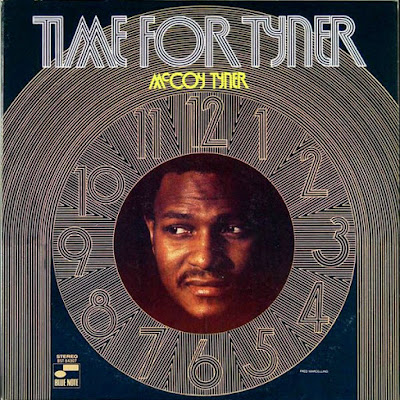 
Here is a rather mixed bag from Tyner.Side 1 features some of his best work as a solo artist and the two tracks are challenging powerful numbers that reflect the changing styles in jazz at the end of the sixties.Tyner and Bobby Hutcherson are amazing together and the music is like a more muscular version of Hutcherson's work on Andrew Hill's Dialogue i.e bloody good.There is of course a huge difference in the piano however as McCoy bashes the hell out of his keys especially on the epic opener "African Village".Side 2 on the other hand features one Tyner original and three standards and the pace and experimentation is tined down.It is not bad and still pleasant to listen too but misses the fire in its belly that makes the opening two tracks so breathtaking.

Time for Tyner finds pianist McCoy Tyner with vibraphonist Bobby Hutcherson, bassist Herbie Lewis, and drummer Freddie Waits. Tyner and Hutcherson blend together quite well on the first three tracks from the original program (all Tyner originals), and both display expertise at coming up with inventive ideas over modal vamps. The other three selections are veteran standards. "I Didn't Know What Time It Was" is taken by the full quartet, Hutcherson sits out on "Surrey with the Fringe on Top," and a rhapsodic "I've Grown Accustomed to Your Face" is a piano solo. A fine all-round showcase for McCoy Tyner in the late '60s.

McCoy Tyner, Being my favorite pianist, his music has provided me with endless enjoyment ever since I became a "real" jazz fan. This album, "Time For Tyner" is exactly what I'm referring to. I have always been impressed with McCoy's skill as a composer, honed more than likely during his time spent with Trane. I've noticed that he always pulls the best out of his personnel, regardless of the set up. A great quartet setting here with no horns is the perfect backdrop for McCoy's wizardry. The originals he penned for this album are amazing, all killer and no filler. Vibist Bobby Hutcherson complements McCoy perfectly, while Freddie Waits and Herbie Lewis on drums and bass respectively swing as well. The opening original track "African Village" is utterly amazing. Pay close attention to the synergy of this lineup. Incredible! A mandatory addition to the Tyner catalog, "Time" is as good a RVG reissue as there is out there!
Posted by Zen Archer at 3:20:00 PM 6 comments: Links to this post 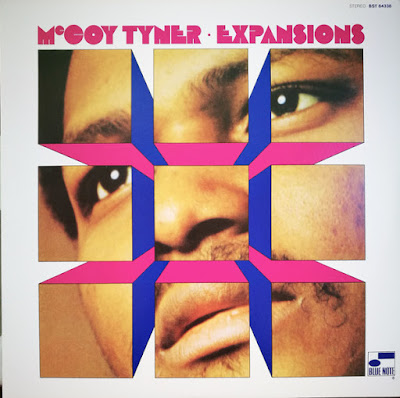 McCoy Tyner's albums from the late 1960s sound as if he was searching for something. He had found a place in John Coltrane's quartet, only to then find that Coltrane was developing farther and farther at an incredible pace, leaving Tyner stranded somewhere on the way. Tyner's string of albums for Blue Note - even good ones, such as The Real McCoy or the present Expansions feel oddly transitional, and it would only be on his excellent albums for Milestone from 1972 onwards that he seemed to have found a place in which he was really comfortable.

On Expansions, he is trying to expand sounds, melodies, harmonies and approaches, but despite excellent sidemen like Woody Shaw, Gary Bartz and Wayne Shorter, something is amiss, and he never ventures very far from a loose form of post-bop, a kind of music that doesn't feel all that up to date in 1969.

Still, "Visions" and "Song of Happiness" are as commanding and involving as any of his tracks from this period; Tyner certainly hadn't lost it, he was simply searching, and it wouldn't take him long to find it.

I have to address one of the the other reviewers who wrote that "Vision" has a "corny funk-jazz head." This is just uninformed. "Vision" is pure sixties modal jazz. It does have a straight beat, but it certainly isn't trying to be funky. And, the solos on this tune are anything but "profoundly dull," unless by profoundly dull, you mean amazing.

As for the recording quality, it is a little fuzzier than Van Gelder's earlier stuff, but that was the fad in the late 60's early 70's. And, yes Ron Carter's arco playing leaves a lot to be desired, especially on "I Thought I'd Let You Know," but it's not enough to take away from the fact that this is a fantastic album. Highly recommended!
Posted by Zen Archer at 3:11:00 PM 3 comments: Links to this post 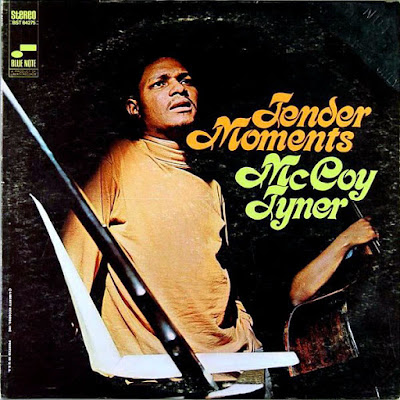 "Tender Moments" is a very big change from Mccoy's first on Bluenote. the Players have amuch more abrupt approach to the compositions. Along with Spaulding on Alto and Flute, Morgan on Trumpet, Maupin on Tenor, and Priester on Trombone, is the less familiar French Horn work of Bob Northern and Tuba of Howard Johnson. I give a lot of credit to the tuba because he creates this kind of lifting feeling and the rest of the Horns blend in incredibly well. The coltrane tribute, "Mode To john", is a Modal based tune. The Spontaniety it lacks is made for with complex arrangments. Tyner had an inclusive repertiore of tunes and he experimented with different rhythmns and time signatures. "The High Priest", not to be confused with a Messengers tune of the same name, is a Thelonious Monk influenced piece and incidently sounds very much like a Monk tune. "Utopia" and "All My yesterdays" are standout tracks with great dynamics and fluency. Thank you bluenote for reissuing great music.

On this excellent set, McCoy Tyner had the opportunity for the first time to head a larger group. His nonet is an all-star aggregation comprised of trumpeter Lee Morgan, trombonist Julian Priester, altoist James Spaulding, Bennie Maupin on tenor, Bob Northern on French horn, Howard Johnson on tuba, bassist Herbie Lewis, and drummer Joe Chambers in addition to the pianist/leader. Tyner debuted six of his originals, and although none became standards (perhaps the best known are "The High Priest" and "All My Yesterdays"), the music is quite colorful and advanced for the period. Well worth investigating.
Posted by Zen Archer at 3:03:00 PM 3 comments: Links to this post