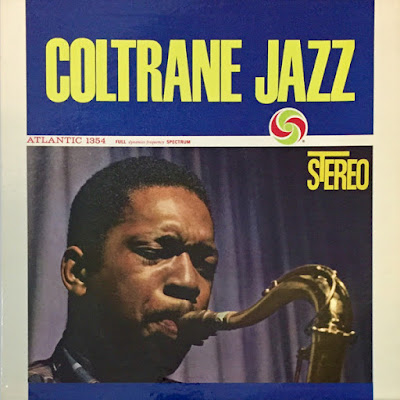 "Coltrane Jazz" is the sixth studio album by jazz musician John Coltrane, released in 1961 on Atlantic Records, catalogue number SD 1354. The song "Village Blues" is noted as a landmark recording, as it marks the first session date of the early John Coltrane Quartet on record. Featured alongside Coltrane are pianist McCoy Tyner, drummer Elvin Jones, and bassist Steve Davis (who would within 18 months have been replaced by first Reggie Workman and then Jimmy Garrison who would stay with 'Trane until his death).

The first album to hit the shelves after Giant Steps, Coltrane Jazz was largely recorded in late 1959, although one of the eight songs ("Village Blues") was done in late 1960. On everything save the aforementioned "Village Blues," Coltrane used the Miles Davis rhythm section of pianist Wynton Kelly, bassist Paul Chambers, and drummer Jimmy Cobb. While not the groundbreaker that Giant Steps was, Coltrane Jazz was a good consolidation of his gains as he prepared to launch into his peak years of the 1960s. There are three standards aboard, but the group reaches their peak on Coltrane's original material, particularly "Harmonique" with its melodic leaps and upper-register saxophone strains and the winding, slightly Eastern-flavored principal riffs of "Like Sonny," dedicated to Sonny Rollins. The moody "Village Blues" features the lineup of McCoy Tyner on piano, Elvin Jones on drums, and Steve Davis on bass; with the substitution of Jimmy Garrison on bass, that personnel would play on Coltrane's most influential and beloved 1960s albums. [Some reissues add four bonus tracks: alternate takes of "Like Sonny" and "I'll Wait and Pray" that were first issued on Alternate Takes and alternate takes of "Like Sonny" and "Village Blues" that came out on the Heavyweight Champion: The Complete Atlantic Recordings box.]

I want to talk history. Specifically the history of Coltrane's career. See, there are three Trane albums that can be marked as turning point in his career, which of course also make them turning points in the history of jazz as a whole. First, you have Blue Train, which was basically Coltrane's debut. Yes, he had made other recordings before that (and some were great! Like 'Round About Midnight! I love that album!), both as a leader and a sideman, but it was on Blue Train that the man really came into his own. Then came Giant Steps, where Coltrane basically tore down everything he had been building up beforehand, shot the hard bop rulebook with a McBain-style hand cannon (there's no record of him saying "Bye, book" in a deadpan voice as he did so, but I have every reason to believe he did), and established himself as a guy who did things his own way while at the same time completely defining what jazz would be like for the next several years. Then came A Love Supreme, where he basically did the same thing, with jazz on a whole instead of just hard bop.

Regardless, taken for what it is, it's actually a pretty good album once you get to track three. Despite being rather traditional, it's still a very unique experience that's got the unmistakable Coltrane stamp on it. It's in the small things, really. The distinctly Eastern European melody on "Fifth House," the use of harmonics, rather abrasive on a saxophone, on both the aptly titled "Harmonique" (which pretty much exists as a showcase for them) and at the end of the otherwise soothing, absolutely lovely ballad "I'll Wait and Pray," the distinct spin he puts on the blues in "Some Other Blues." But they're there, and if you're patient with this one, you will pick up on them. The presence of two fantastic songs that pretty much everyone agrees are among his classics - the fluttering, playful "Like Sonny" and the beautifully traditional reading of "My Shining Hour" - will probably be enough to lure you back until then, but it's the quirks of the lesser-known songs that really give this one its charm. And I just learned that this was recorded non in Giant Steps' wake, but at around the same time, which steps up an interesting dialog between the two.

The four musicians that play on almost the entirety of this album also played on two of the greatest jazz albums ever recorded (Miles Davis's Kind of Blue and John Coltrane's Giant Steps) - both of which were recorded earlier in the year 1959 (in fact, some of Giant Steps was recorded during the same sessions as this album). Therefore it is difficult to approach this album without expectations.

Another challenge is the mix: recorded in the early days of stereo, when it was all the rage to pan a couple of instruments all the way to the left (in this case the tenor sax and piano) and another couple all the way to the right (here the double bass and drums), there seems to be an issue with the right channel. Perhaps someone forgot to turn the bass and drums up loud enough, or perhaps they neglected to turn up the higher frequencies on those instruments - or perhaps this is just due to the decay of the master tape before it was transferred to CD all these years later. Whatever the reason, I've found the only way to listen to this album is turn it up as loud as you can stand (which is unusual for a jazz album) - only then is it possible to appreciate Paul Chambers' bass playing, and to lesser success, Danny Cobb's drums.

Once you've got the expectations and the mix sorted out, this is a fine album. It does begin in a non-spectacular way, with two cover versions (played in the Miles Davis 'singalong' style) and a later track recorded in November 1960 with a different line up. However, repeated listens do reveal the charms of these tracks, namely Coltrane's understated playing and Wynton Kelly's lyrical piano (substitute McCoy Tyner's impressionistic playing on Village Blues). But the key here is to turn these songs up loud, and forget about fireworks!

We are then introduced to two pieces of real genius: Fifth House and Harmonique. Not only has Coltrane brought a control of sax harmonics into his rigorous practice sessions, but it seems that, after exploring the full potentials of Be-Bop and his Giant Steps chord system, he is again searching for something new to play. It seems to me that the music of Thelonious Monk and Sun Ra were an obvious influence at this point regarding compositional approach, but the tenor playing is really quite unusual for 1959. These two pieces stand far above anything else on this album.

After the shock of the new, we get back to some more familiar territory. Two more Coltrane compositions featuring great solos from the band (Like Sonny and Some Other Blues), and a brief take on the ballad I'll Wait and Pray - which comes off like a mini I Want To Talk About You (on Soultrane) in it's beauty.
Posted by Zen Archer at 1:52:00 AM 2 comments: Links to this post 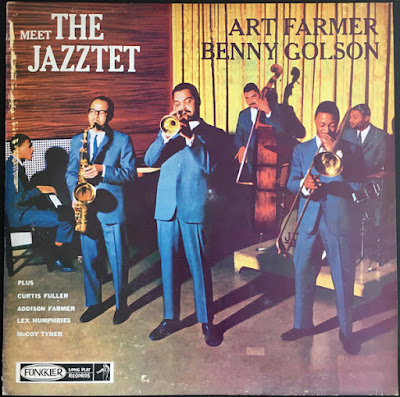 
When people discuss the cream of the hard-bop crop, names such as Clifford Brown and Max Roach, Art Blakey, and Horace Silver usually rise to the top. Without question, the Jazztet deserves inclusion in that discussion. Co-leaders Farmer and Golson had already made names for themselves before the sextet's 1960 recording debut; upstarts Curtis Fuller and McCoy Tyner were well on their way. Benefiting from Golson's usual crafty arrangements, the ensemble rolls through 10 cuts, offering a nifty combination of down-home funk and lyrical flair. Two of Golson's most revered compositions---the gentle "I Remember Clifford," led by Farmer's silky trumpet, and the urgent "Blues March"---accompany the original recording of Golson's "Killer Joe," which includes his verbal description of the title character. The band also rips merrily through Cole Porter's "It's All Right with Me" and struts easily through Gershwin's "It Ain't Necessarily So." --Marc Greilsamer

Landmark work by one of the greatest jazz outfits of the early 60s! Art Farmer and Benny Golson were both known as well-composed players during the 50s – strongly soulful, but often with a fine sense of arrangement that usually tended towards the lyrical side of things. With this group, though, they turned that approach towards a heavier sounding style of jazz – tightly stepping soul jazz, in the manner that was being explored at the time by Cannonball Adderley, Art Blakey, and others – presented by Farmer and Golson with a bit more groove and a wonderful kick at the bottom!

One of the top hard bop contingents of the '50s and '60s, the Art Farmer and Benny Golson co-led group known as the Jazztet featured some of the best original charts and soloing of the entire era. While the group was only in existence between 1959-1962, its excellent reputation could rest on this stunning disc alone. Cut in 1960, the ten-track date features four of Golson's classic originals ("I Remember Clifford," "Blues March," "Park Avenue Petite," and "Killer Joe") and one very fetching Farmer-penned cut ("Mox Nix"). The rest of the standards-heavy mix is given the golden touch by the sextet. And what a combo this is -- besides Farmer's svelte trumpet lines and Golson's frenetically vaporous tenor solos, one gets a chance to hear a young but already very accomplished McCoy Tyner, the tart and mercurial trombonist Curtis Fuller, and the streamlined rhythm tandem of Addison Farmer and Lex Humphries. An essential hard bop title.
Posted by Zen Archer at 1:35:00 AM 1 comment: Links to this post