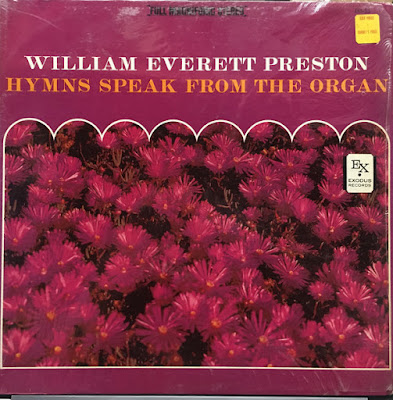 Reissued in the UK as "Gospel in my Soul"

Once in a lifetime a talent appears who bears the stamp of greatness. A talent so impregnated with intensity that the potential is immediately unmistakable. So is the proficient artistry of Billy Preston.
Billy is one of the most respected organists in gospeldom, as well as pop circles. Since his youth, Billy's work with choirs and group, both in person and on recordings, has been exeptionally original.
On this gospel album, Billy Preston displays his talents as both an organist and a pianist, and through the mechanical magic of overdubbing he may be heard playing both instruments simultaneously. Especially interesting is Billy's rendition of the old Hymn PASS ME NOT O GENTLE SAVIOR. The Hymns, for the most part are standard and his interpretation of them, though performed in unique Preston manner, retain much of the basic quality. In other words, you can sing along with the organ and piano and you can identify each and every selection.
Such old favorites as WHEN I LAY MY BURDEN DOWN, HIS EYE IS ON THE SPARROW, JUST A CLOSER WALK WITH THEE and ANGELS KEEP WATCHING OVER ME are included with more recent popular items as HOW GREAT THOU ART and THE ONLY HOPE WE HAVE. And for an appreciation of Billy's versatility, listen to him as he makes his electric console organ speak in the traditional cathedral style on PREAISE GOD FROM WHOM ALL BLESSINGS FLOW.
Though Billy has received many awards, including a GRAMMY for his popular soul recordings, it is apparent his roots are in Gospel and this album presents Billy to the audience with the Gospel of his soul in it's purest form.
Posted by Zen Archer at 6:18:00 PM 1 comment: 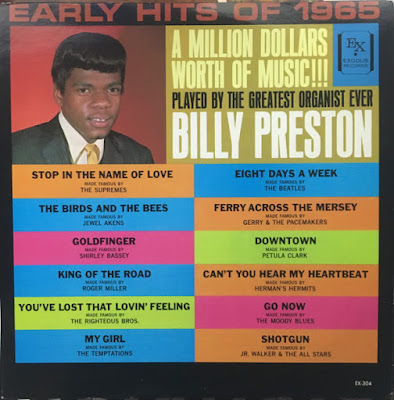 Subtitled:
"A million dollars worth of music!!!
Played by the greatest organist ever."

Recorded in the same sessions of The Most Exciting Organ Ever and originally released by the Vee-Jay label and re-released by Exodus Records the following year.
Posted by Zen Archer at 6:10:00 PM 1 comment:

Billy Preston - 1964 - The Most Exciting Organ Ever

Billy Preston
1964
The Most Exciting Organ Ever 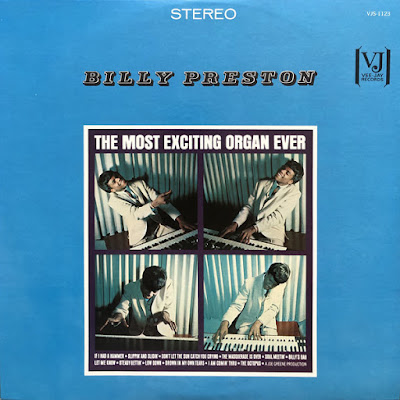 It is quite likely that each of us has an individual opinion on what exactly is the most exciting organ ever and to whom in particular it happens to belong... but hang on there, this is a Billy Pres­ton review and we are actually supposed to talk about his contributions to the world of key­board-based music, or are we not. The album, with one of the most provocative titles ever, was released a few days prior to Billy's 19th birthday on the VJ Records label (notorious for being the first overseas label to gain rights to Beatles' recordings, before EMI got around to their senses), and is often considered his first «proper» album, even though it really is the second.

And there is relatively little substantial difference between Billy at 16 and Billy at 19, except that now, almost half of the tunes are original instrumental compositions for the organ (ʽI Am Coming Throughʼ gets to have its title chanted in group harmony form, but that's about as far as it goes with vocal presence). None of them are particularly memorable or interesting per se — the themes are fairly basic — but even the most rhythmically and tonally generic, like the basic blues shuffle of ʽLowdownʼ, are all quite pleasant for those who like Preston's style in general.

Of course, his «conversing organ» style is best appreciated where he is emulating classic melo­dies: my favorite bit is the attempt to emulate Little Richard's singing intonations on ʽSlippin' And Slidin'ʼ — not a lot of rock'n'roll excitement here, but the comic-seductive vibe is carried over very well, by heavily taxing the organ keys instead of the vocal cords. ʽIf I Had A Hammerʼ is somewhat less recognizable, but even more inventive in exploring the organ's capability to beat the human voice as primary message-carrier.

Overall, though, the whole thing is surprisingly less exciting than 16 Yr. Old Soul. Maybe it is because of the backing band, which seems sort of slack and disinterested, acting like a mere dummy (at least on 16 Yr. Old Soul there were actual guitar solos, competing with the organ). Maybe it is because the choice of covers is a bit off (I mean, who the heck is interested in Don Covay's ʽSoul Meetingʼ?), and the originals aren't quite up to par. Or maybe it is because, in the end, the whole thing sort of comes across as just a blunt publicity campaign for the Hammond.

On the other hand, there is no need to be condescending. Billy's level may be incomparable with that of, say, Jimmy Smith (it is always tough to compare the levels of «pop» and «jazz» musici­ans, even though so few people actually listen to the latter), but this is his vision, and there was nobody else around with a vision like that in 1965. The Hammond, with its thick sound and extra elec­tronic capacities, could do lots of tricks for the rock and pop world that an ordinary piano could never reproduce, and Billy, both here and elsewhere, is quite keen on discovering as many of these as possible — pitch, tone, strength, modulation, whatever. What the hell, in a way, this could be the most exciting organ ever. I mean, I like Rick Wakeman and all, but maybe whatever he brought into this world should be described by some other word than «exciting». A thumbs up here, for reasons that go beyond «historical», even if not too far beyond.

The Most Exciting Organ Ever is the second album by Billy Preston. The fully instrumental album was released in 1965, several weeks before Preston's nineteenth birthday, at a time when he was a regular performer on the ABC TV pop music series Shindig![1] The album includes "Billy's Bag", which was a favorite among British musicians and club-goers at the time.[2] Preston included a live version of the track on his 1974 album Live European Tour.

Extra songs recorded during the sessions for The Most Exciting Organ Ever were released on Preston's next studio album.

As the late John Holmes would tell you, it's damn near impossible to live up to a title as lofty as The Most Exciting Organ Ever, but Billy Preston does his best -- the raw physical power of Preston's performances are matched only by the imagination and virtuosity of his phrasing. The music bridges the sacred and the profane, fusing the deep, bold sound of the church with the razzle-dazzle of R&B. While Preston's innovative use of bass pedals lends the music its pendulous bottom, his melodies defy gravity, soaring and dive bombing like birds of prey in flight.
Posted by Zen Archer at 5:51:00 PM 1 comment: 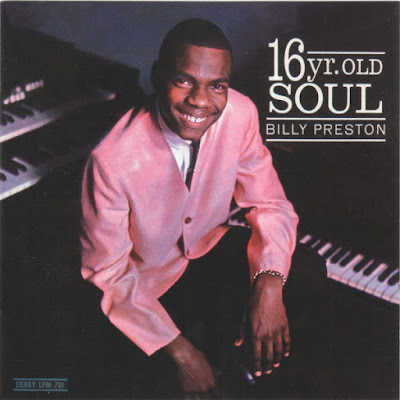 For all of the unabridged amazement surrounding Billy Preston’s high school-aged mastery of both the bubbling jazz of Jimmy Smith and the lean Memphis R&B of Booker T. Jones, the truth is, he’d been at this a while.

When Derby released the aptly titled 16 Year Old Soul five decades back, Preston had already made an unforgettable contribution to Sam Cooke’s ageless blues project Night Beat, adding his own organ-based barnyard asides to a simmering new take on “Little Red Rooster.” Prior to that, Preston had served as the choir director at his mothers church going back to the tender age of five.

He appeared on Nat King Cole’s television variety program, singing “Blueberry Hill,” toured Europe with Little Richard (where Preston began a life-long friendship with the Beatles) — and even played the childhood version of W.C. Handy for a 1958 biopic called St. Louis Blues.

16 Year Old Soul wasn’t even Billy’s first recording. That honor went to the tiny Contract label out of Hollywood, which released a pair of largely forgotten early 45s. Still, his debut on Cooke’s fledgling label (started with J.W. Alexander, of the Pilgrim Travelers; and S.R. Crain, of his Soul Stirrers) is generally understood to be the beginning point of Preston’s legend — the moment when many first came to know the boundless talent, enthusiasm, joy and marrow-deep groove that surrounded his work at the organ.

A mixture of covers and original material — including Preston’s first single for Derby, the appropriately named “Greazee” — 16 Year Old Soul found Billy surrounded by a group of ace sessions guys, including drummer Earl Turner and guitarist Tommy Tedesco, among others.

He returns with a swinging update of “Lost and Lookin’,” which had earlier appeared on Cooke’s Night Beat,; transforms “I Can’t Stop Loving You” (which had just become a crossover hit for Ray Charles) into a girder-rattling groover; finds the heart-opening gospel centerpoint of Cooke’s “Bring It On Home To Me”; and threatens to shake the studio loose of its foundation on his own hard-charging “Ain’t That Love” — the last of which serves as a small glimpse into the afro-shaking funk to come. This new reissue is rounded out by two rare bonus cuts, both of them instrumentals.

Most listeners only became aware of Billy Preston as a solo artist after he signed to Apple Records in the late 1960s. But he'd been recording for a long time prior to that, dating back to when he was a teenager. This instrumental album for Sam Cooke's SAR label (issued on its sister Derby imprint) was cut in March 1963, when Preston was still going to high school in Los Angeles. The very fact that it's wholly instrumental indicates that it's pretty early in Preston's evolution, and though he does play some piano, it's really on the more uptempo, organ-dominated tunes where he hits the best groove. In truth, these aren't any great shakes even when it comes to soul organ instrumentals, but they have a nice swinging bounce that places them a cut above period background music, though they fall a good ways short of being spellbinding. The slower numbers (including covers of hits by Sam Cooke and Ray Charles) verge on easy listening; in contrast, the more urgent cuts are cookin', with bop, jazz, and gospel influences spicing up the soul/R&B recipe. Preston didn't write much of the material, but one of the numbers on which he's credited as a co-composer, "Good News," is a highlight. [The 2011 CD reissue on ABKCO adds a couple of bonus tracks, one of them a cover of Cooke's "Win Your Love for Me."]
Posted by Zen Archer at 5:20:00 PM 2 comments: