The Jazz Messengers
1962
Meet You At The Jazz Corner Of The World Vol. 2 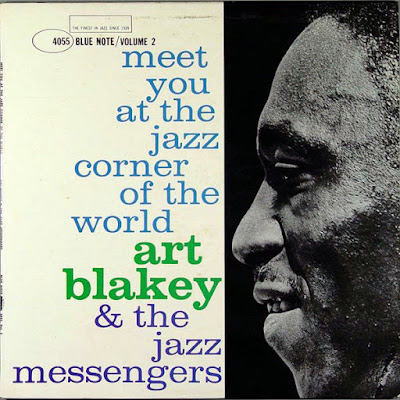 Art Blakey (drums) and the Jazz Messengers are back home at Birdland [AKA ‘the jazz corner of the world'] on this second instalment of Meet You At The Jazz Corner Of The World, Vol. 2 (1961). Over half a decade after recording the seminal bop masterwork A Night At Birdland (1954), the combo -- which sports Lee Morgan (trumpet), Wayne Shorter (tenor sax), Bobby Timmons (piano) and Jymie Merritt (bass) -- returned to their former stompin' grounds on the five cuts included on this disc. The band reels under the authoritative beat of Blakey, who grounds the emerging leadership of Morgan and Shorter. If sides such as Hank Mobley's "High Modes" -- which jump-starts this effort -- is any indication, the pair seem to be likewise learning from the experience of simply interacting with each other. This sort of ‘on-the-job training' became an essential element in the Messengers and propelled the likes of Shorter into the orbit of Miles Davis. During his tenure with Blakey, Shorter's trademark lyrical performance style can be actively heard emerging during these recordings. He contrasts Morgan's limber and lilting solos and improvisations, which weaves through Jymie Merritt's pulsating and hypnotic basslines on the previously mentioned "High Modes". "Night Watch", another Mobley composition, is a syncopated and infectiously rhythmic side which spotlights Shorter's increasing grasp on his immense improvisational skills. Again, these abilities would allow the musician to quickly develop as the undaunted instrumentalist that helped revolutionize modern jazz with Miles Davis in the mid ‘60s. The LP concludes with a rousing rendition of Shorter's "The Summit" -- which would become a standard for this particular incarnation of the Jazz Messengers. Once again the lines fly fast and furious between Shorter and Morgan with Timmons securely anchoring the soloists to the equally involved rhythm section. Both the first and second volumes of Meet You at the Jazz Corner of the World were collected on a Rudy Van Gelder two-CD edition. This 2002 reissue includes a newly inked essay from jazz historian Bob Bluementhal as well as reproductions of Leonard Feather's original sleeve notes. Enthusiasts should be aware that the sonic distortion is inherent in the master tapes and is otherwise unavoidable on the reissue. However, this should not discourage interested parties and collectors.
Posted by Zen Archer at 11:56:00 PM 1 comment: Links to this post 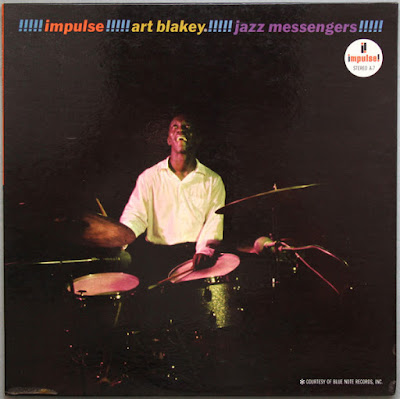 Some critics have panned this 1961 session by mr. blakey and the jazz messengers, feeling the album lacks the punch of such classic blakey lp's like 'moanin' or 'a night in tunisia' (blue note records version). this set is more laid-back, for a blakey band, emphasizing groove over hardbop fury. but that is not to say this album is not good, though. mr. blakey had a gift for bringing together great bands of young musicians and forging a solid unit out of them. this version featured the outstanding horns of lee morgan (trumpet), wayne shorter (tenor sax), and curtis fuller (trombone). mr. morgan takes a quiet approach to his soloing (eg., "don't you know what love is") and is wonderful. mr. shorter gives us glimpses of things to come on his own blue note sessions (eg., 'juju' and 'night dreamer'). other highlights are the opening "alamode" and "i hear a rhapsody". for a nice introduction to mr. blakey, or to hear a more groove oriented messengers set, try this album.

An absolutely wonderful 1961 set from Blakey and company, who demonstrate here how to be note-perfect without leeching away the emotion of a performance. Aside from Blakey's divine drum work, the standouts include Jaymie Merritt's trippy bass fingerwork and Wayne Shorter blowing his heart out on tenor sax.
Posted by Zen Archer at 11:42:00 PM 1 comment: Links to this post 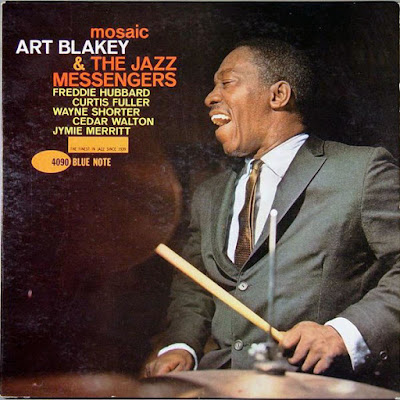 
This is the one that started it: Mosaic, recorded in 1961, was the first recording of Art Blakey's Jazz Messengers as a sextet, a setting he kept from 1961-1964. The band's front line was trumpeter Freddie Hubbard, trombonist Curtis Fuller, and tenor saxophonist Wayne Shorter; Cedar Walton played piano and Jymie Merritt (a criminally underappreciated talent) was the bassist. Everything on this set was written by the musicians in the band. Walton wrote the burning title track; its blazing tempo and Eastern modes were uncharacteristic of the Jazz Messengers sound, but it swings like mad. Hubbard contributed two pieces to the album, the first of which is the groover "Down Under," with its blues gospel feel. The bandmembers dig their teeth into this one, carrying the blues theme to the breaking point as Hubbard fills in between. But the horn charts are so sharp, so utterly devoid of excess, that they won't let the listener go. Shorter's "Children of the Night" is a fine example of the tunes he would compose for the Miles Davis Quintet a bit later. While it's a hard bop swinger to be sure, his use of modality and counterpoint between the soloist and the front line is exemplary and his solo bites hard and fast as he tears up and down the registers of the horn. Fuller's "Arabia" is a basic blues groover, and the playing is inspired throughout. The disc closes with Hubbard's "Crisis," which opens with Merritt and Blakey ushering in the rest of the band. Walton first plays a repetitive minor-key riff. When the horns enter, Walton keeps the theme, Merritt moves over a bit to dig in between the lines, and Blakey keeps it all anchored because in this tune rhythm is everything. Hubbard was in many ways a soul-jazz composer before there was such a thing, and the motifs in this tune prove it -- as does his beautiful blowing in his solo. This is a fine recording and should be owned by any Blakey fan. The Rudy Van Gelder reissue came out in 2006 and features no bonus material. The sound, as on all the Van Gelder reissues, is painstakingly wonderful.

Not only is the group on Mosaic arguably the greatest version of Art Blakey's Jazz Messengers, but it is one of the finest bands of all time in any type of music. Freddie Hubbard had just joined the Jazz Messengers while Curtis Fuller had left the Jazztet for the opportunity to play with the powerhouse ensemble. With the frequently blazing tenor playing of Wayne Shorter, Cedar Walton, Jymie Merritt and the explosive Blakey, this was not a band for lightweights.

Not only did the Jazz Messengers have five major soloists but Hubbard, Shorter, Walton and Fuller were inventive composers. On 1961's Mosaic, each of those four masters contribute at least one song apiece. Such unforgettable numbers as Fuller's haunting "Arabia," Shorter's "Children Of The Night" and Hubbard's "Crisis," along with the exciting and very individual solos, make Mosaic into a superb effort that ranks as one of the most vital recordings of the era.
Posted by Zen Archer at 10:16:00 PM 1 comment: Links to this post