The Jazz Messengers
1958
A Night In Tunisia 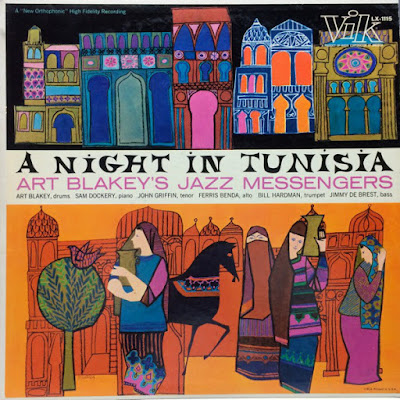 In addition to his prowess as a drummer, Art Blakey is probably best known for his ability to select and willingness to nurture talented young musicians who would, after their time in his Jazz Messengers, go on to become some of the strongest composers and leaders of all time; perhaps nowhere is this generosity towards the development of others more on display than it is here on "A Night in Tunisia". Never one to hog the spotlight simply because his was the name at the top of the bill, Blakey turns much of this set over to his youthful side men, allowing them to shine not only through their playing, but also by letting them express their creativity through their compositional skills as well. As a result, Morgan, Shorter and Timmons all get to showcase their burgeoning talents (with Shorter's "Sincerely Diana" and Morgan's slow-smoldering "Yama" being two of the standouts here), and the end result is a superior set of classic Hard Bop filled with catchy riffs and extended solos that is one of the Jazz Messengers' best.
Art Blakey & the Jazz Messengers hit their artistic peak with the powerful A Night in Tunisia. This incarnation of the group included Lee Morgan, Wayne Shorter, Bobby Timmons, and Jymie Merritt along with their leader, Blakey. As the Messengers entered their most fruitful period for Blue Note, Blakey drove his men relentlessly with powerful grooves, heavy swinging, and shouts of encouragement. This session documents the full power of his assertive leadership and the masterful playing of his sidemen, each rising to legendary status under his tutelage. Long known for their creative arrangements within the context of small-group jazz, the Messengers push the definition of hard bop and blues to the limit here. Dizzy Gillespie's title track is evidence enough of the creative power of this group: Blakey's steam shovel-like mambo, Morgan and Shorter's wailing solos, and a dramatic ending make for a stunning piece. Shorter's contribution includes the swinging "Sincerely Diana." The soulful Bobby Timmons presents his delightful "So Tired," a bluesy number in the spirit of his classic "Dat Dere." Also included are Lee Morgan's smoky "Yama," the bouncing "Kozo's Waltz," and the classic "When Your Lover Has Gone."

A couple years after the legendary Moanin,' Art Blakey and his Jazz Messengers showed us they were still at the top of their artistic game with 1961's A Night in Tunisia (the groups second album to be titled as such). Blakey transforms the Dizzy Gillespie standard from which the album gets it's title into a roaring, extended hard bop anthem that offers some of his best, wildest, most exhilarating drumming since he put The Thunder Drum Suite to tape. The group then continues the energy with the hard bouncing and swinging Sincerely Diana and gets deliciously bluesy with So Tired before getting mellow and moody with the "smokey" (as it's been described) Yama, a fantastic little ballad, before returning the tempo with Kozo's Waltz. While Moanin' remains Art Blakey and The Jazz Messengers most essential and all around best work, A Night in Tunisia is quite excellent and worth checking out.
Posted by Zen Archer at 11:48:00 PM 1 comment: 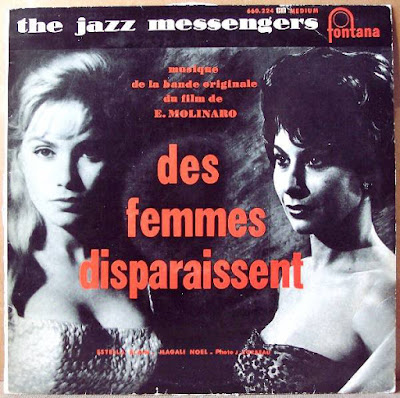 These tracks were recorded in Paris in December 1958 during a week-long European road trip by the Jazz Messengers—Benny Golson (ts) [pictured], Lee Morgan (tp), Bobby Timmons (p), Jymie Merritt (b) and Blakey (d)—recorded incidental music for a French film.

Much of the music was written by Benny, with some of the rhythmic blues pieces credited to Blakey. The 18 brief, improvised sketches are largely fragments, though I like to think of them as Jazz Messengers potato chips.

What you have here is an interesting series of incidental music sequences by the Jazz Messengers at the height of the hard-bop band's creative power. The music was recorded after a particularly prolific period for the musicians on the date. Moanin', one of Blakey's finest albums, was recorded two months earlier in October. Blakey recorded Drums Around the Corner and Holiday for Skins in November while Benny recorded The Other Side of Benny Golson and Benny Golson and the Philadelphians in the months leading up to the trip.

"Although American movies had not yet begun to employ jazz composers for soundtracks, French director Louis Malle had used Miles Davis to create the soundtrack for his Ascenseur Pour l'Échafaud in 1957. On December 18 and 19, 1958, Blakey recorded music for Édouard Molinaro's film Des Femmes Disparaissent (The Disappearing Women) with Benny Golson, Lee Morgan, Bobby Timmons and Jymie Merritt; he would record music for Roger Vadim's Les Liaisons Dangereuses, on July 28 and 29, 1959, using French saxophonist Barney Wilen in place of Golson."

Note that these are largely concepts recorded to add tension behind scenes in this black-and-white film. But there are tracks that run over four minutes in length. If you're a fan of Blakey and this lineup of Jazz Messengers, you'll find these chips rewarding. 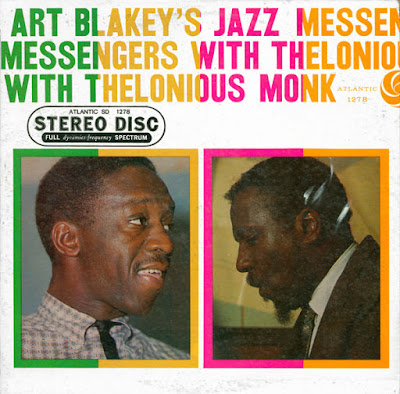 Most of the titles on this album are derived from Thelonious Monk's vast catalog of bop standards. Both co-leaders are at the peak of their respective prowess with insightful interpretations of nearly half a dozen inspired performances from this incarnation of the Blakey-led Jazz Messengers. This combo features Art Blakey (drums), Johnny Griffin (tenor sax), Bill Hardman (trumpet), and Spanky Debrest (bass). Immediately, Hardman ups the ante with a piledriving lead during "Evidence" that underscores the heavy-hitting nature of this particular jazz confab. Monk counters with some powerful and inspired runs that are sonically splintered by the enthusiastic -- if not practically percussive -- chord progressions and highly logistic phrasings from the pianist. The inherent melodic buoyancy on "In Walked Bud" contains a springboard-like quality, with Griffin matching Monk's bounce measure for measure. Griffin's incessant efforts create a freshness to the tune that often escapes other less inspired readings. From Blakey's boisterous opening on "Blue Monk" through to Monk's single-note crescendo during the finale, the Jazz Messengers provide a lethargic propulsion that showcases the melody's bluesy origins. This directly contrasts the uptempo charge of "Rhythm-A-Ning." The quirky yet catchy chorus glides with the dual-lead horn section as the entire arrangement is tautly bound by the understated Debrest and Blakey. Griffin's "Purple Shades" is the only non-Monk composition that this aggregate recorded. This smartly syncopated blues seems better suited for the Jazz Messengers than for Monk. However, the pianist's opening solo alternately shimmers and shudders with Debrest as well as Griffin and Hardman, who demonstrate their own pronounced capabilities over Monk's otherwise occasional counterpoint.
Posted by Zen Archer at 9:45:00 PM 2 comments: 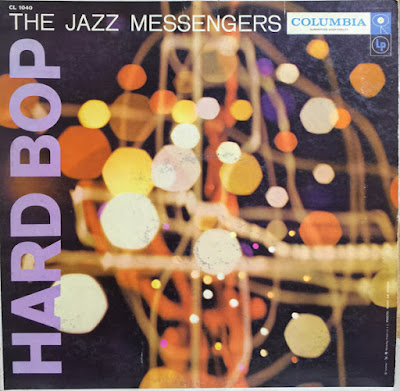 Issued as part of Mosaic Records' Singles series, Hard Bop is given the deluxe treatment here. For starters, this 1957 date -- with altoist Jackie McLean, pianist Sam Dockery, trumpeter Bill Hardman, and bassist Spanky DeBrest -- appears here for the first time in stereo, remastered from the original three-track tapes. Another plus is the addition of four tracks from the same sessions, recorded September 12 and 13, 1956, at Columbia Studios. The original featured McLean's classic "Little Melonae," as well as the steaming Hardman number "Cranky Spanky" and one he wrote with McLean, "Stanley's Stiff Chickens," all of which are fine definitions of what hard bop indeed was. The bonuses here include three tracks from Drum Suite -- including Gigi Gryce's "Nica's Tempo," Hardman's "Just for Marty," and Mal Waldron's stunner "Dee's Dilemma." It's topped off with "Gershwin Medley" from Originally, released by Columbia in 1981. This is the first place this entire session in all its finery has been assembled. While it's true this was the band right after Horace Silver left, and was still not in its most memorable era, the music here is for the most part flawless and necessary for any Jazz Messengers fan

The following brief review was intended for the original "Hard Bop" on a 1956 Columbia date. The present "Hard Bop" is an anthology of essential Blakey recordings that can be easily recommended, though for some it might be preferable to go to the individual albums. For example, several of the tracks are from the indispensable "A Night at Birdland," an early (1954) Messengers' album and one of the first Blue Note "live" albums. It's revered by many collectors as representative of some of the best of Clifford Brown and originally was released as two separate vinyl volumes. (Give the nod to Vol. 1.)]
Posted by Zen Archer at 9:17:00 PM 1 comment: