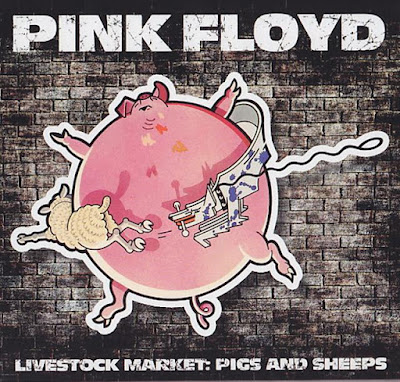 
Pink Floyd toured Europe for more than two months for Animals in early 1977, ending with nine shows in the United Kingdom.  The first five were at Wembley in London and the final four were in New Bingley Hall in Stafford (March 28th to March 31st).

Tapes exists for only the final Stafford shows, and March 30th has two tapes in circulation.  The first is a very good and clear audience tape containing only the first half of the show, from “Sheep” to “Pigs (Three Different Ones),” and the second, which Godfather uses for Livestock Market Pigs And Sheeps, is a complete, good quality recording.  This tape is a bit distant from the stage and is a bit thin, but is still a nice sounding document.

Godfather is the first time this show has been pressed onto silver disc.  They’ve done a great job preparing the tape for release.  It has a natural sound and is highly enjoyable.

The venue was relatively new to rock concerts at the time and hosted several big tours in the mid seventies including The Rolling Stones in 1976, Yes in 1977 and Queen in 1978.  Before serving as a concert hall, the building served as a livestock market, a place where farmers brought their “little piggies to the market.”  Its significance for the new Pink Floyd album provides as much irony as does their Paris concerts in the converted abattoir.

For Roger Waters, it might be a commentary upon the loss of human dignity in the rampant free market, where people are forced to become either ravenous dogs, pig-headed rulers or submissive sheep.

The Stafford audience don’t make much fuss.  They are quite vocal at the very beginning when the band start with “Sheep.”  But their yelling subsides as the piece goes on and they listen very quietly to the new work in the first half.

They deliver a tight performance of the new songs.  The sound effects are loud in this recording, so during “Pigs On The Wing Part 2? Waters has to contend with the chirping birds.

But the first disc’s highlight is definitely one of the better early live performances of “Pigs (Three Different Ones).”  This was the last song written for Animals, and didn’t have the time to evolve onstage as did “Sheep” and “Dogs,” both of which were written several years before.  Snow White provides very interesting guitar counterpoint to Gilmour during the “you’re  nearly a laugh” section under that loud mechanical laugh.

In the song’s second half, Richard Wright plays a strong Hammond organ reminiscent of the mortality sequence from 1972.  The audience cheers loudly when the inflatable pig appears over the stage and Waters shouts out “27” to mark off the shows.

After a twenty minute break, the second half starts with the calm beginning of “Shine On You Crazy Diamond (Parts 1-5).”  It provides a startling contrast to the noisy ending of the first half, and the audience start shouting and chanting.

The rest of the Wish You Were HereLP is flawless.  “Welcome To The Machine” has the audience mesmerized at the Gerald Scarfe animation on Mr. Screen and Waters hits the high notes (more or less) in “Have A Cigar.”

“Shine On You Crazy Diamond (parts 6-9)” is another showcase for the guitarists.  Both Gilmour and White take turns, and in the final part play duel lead providing almost an Allman Brothers Band vibe.  A loud and wild “Money” is the only encore.

Livestock Market Pigs And Sheeps is packaged in a tri-fold cardboard gatefold sleeve with various photographs from the Animals tour on the artwork.  Alex The Gnome provides abundant liner notes giving a good summary of the tour in general and the Stafford shows in particular.  Godfather have been producing quality Pink Floyd titles of late and this is another one worth having.
Posted by Zen Archer at 5:02:00 PM 1 comment: 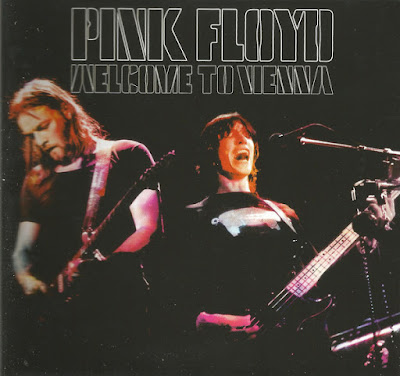 “Oink, Oink…Woof, Woof…Baaaaa”. EMI’s press release to celebrate the release of Animals in 1977.

Pink Floyd began their 1977 tour in support of Animals with a tour of Europe playing multiple nights in larger cities, something that makes perfect sense. With the ever growing size of the Floyd’s stage presentation it would have been physically crushing to put up, break down night after night. The only two cities that had singular concerts were February 1 in Vienna, Austria and February 20 in Antwerp, Belgium, the former is the subject of this new release from Golden Eggs.

There are three known recordings from this concert, a short roughly half hour soundboard fragment, an average incomplete audience recording that is missing the first few songs of the Animals set, and an excellent, near complete audience recording that was used for this title. There have been a couple previous releases of this recording, Animalization (Highland 587/588), a two disc set and Racial Violence (Sirene-024), one of Sirene’s multi disc set featuring the audio on two discs and a DVD with poor 8mm footage, both of these titles are well over a decade old and long out of print. Golden Eggs have used a version of the tape that has had some improvements made to it, most notably the recording needed repair of the frequency response. Particularly in the left channel, certain frequencies were attenuated and needed a boost to bring them in line with the rest of the spectrum. Once performed, the overall tonality was re-balanced to improve the sound. Channel balance also needed correction, the overall balance was aligned as was the balance in specific segments. A lot of technical info I even edited down! But the result is a wonderful version of this concert.

I have compared this Golden Eggs to the old Highland title Animalization, the old Highland title sound good for its age, yet this new title is a very nice upgrade. First off the recording is excellent, clear and detailed with very good dynamics and perfect venue ambiance. The audience is quiet for the most part near the taper, you can hear some very quiet conservation every now and then, the Austrian’s were excited to see the band and this comes through in the recording. This new Eggs title has a much fuller sound versus the Highland which after listening to this sounds rather thin.

The first half of this concert is excellent, Animals is played with a growing confidence and certain aggression. The instrument separation makes it easy to listen to each musician, Richard Wright is very clear and his organ playing during the latter portion of Sheep sounds quite pastoral after the slashing guitars of Gilmour and Waters. Gilmour is certainly the star of this concert, his vocals are wonderful and his playing is superb, the two Animal heavy songs, Dogs and Pigs (Three Different Ones) features lots of searing leads perfectly capturing the anger Roger has unleashed lyrically. You can hear Roger whisper “six” at the 12:10 mark, as many have eluded too, this was actually the seventh concert.

The second half is the complete Wish You Were Here. Gilmour’s leads at the beginning of Shine On You Crazy Diamond sound angry and emotive, once Waters starts singing the audience give the band a loud cheer. Like many of these early 77 recordings, the band sound a bit tentative, the playing is not as fluid as found in the North American concerts, Roger had already taken to wearing headphones to help keep in time with the music and production. Gilmour’s playing during Have A Cigar has a nice swagger to it, the clarity of the recording make it easy to hear the two guitars, bass, and keyboards perfectly. Interesting to hear, clearly, the German radio between Cigar and Wish You Were Hear, the audience cheers happily as well.

The packaging is typical for Golden Eggs, full color live shots adorn the tri-gatefold sleeve complete with official looking Animals style graphics. The inner sleeve has the complete Animals tour dates and the insert has nice liner notes by The Fish Bowl Swimmer. A nice upgrade sound wise and a typical beautiful visual package for a well deserved recording.

As it seems the all releases for this show are out of phase, it was noticed by one of our sites members , and as proof that there are still super cool people in this world Davidestrada gracefully fixed them for all of us to enjoy... So all thanks go to him
Here is his explanation (I am technically challenged, so I have no clue what it means... but my ears say: WOW!!!):
"The main source on that show is inverted, That means the waves are facing each other. That cancels out the punch and gives it a thin pingy sound. The patch before Money and After Money is good but all the main source is not. I checked out 2 other releases I have from then and they are the same as this new one. Download the link I sent and you will hear the upgrade difference. No EQ just flipped one side and got it in Phase (Moved one side 8 micro dots to line up)"

I've included both versions in the download file, so you can compare and decide for yourselves.
Posted by Zen Archer at 4:51:00 PM 1 comment: