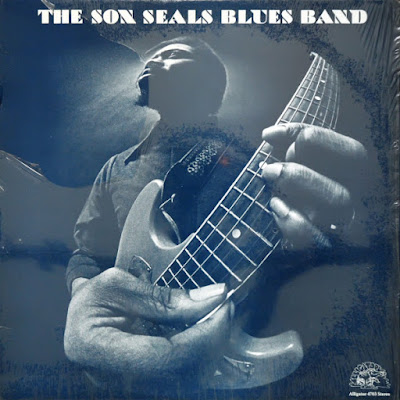 Frank Seals was born in Osceola, Ark., near Memphis, on Aug. 14, 1942. He was nicknamed Son as his father, Jim Seals, had been; his father became Ol' Son. Jim Seals owned an Osceola juke joint, the Dipsy Doodle, and the Seals family lived in back. Son Seals grew up listening to working bluesmen through the 1940's and 1950's. By his early teens, he was joining them, first on drums and later on guitar.

He formed his first band, the Upsetters, in 1959, and started working regularly around Arkansas, Tennessee and Mississippi. He also worked in bands led by Earl Hooker, Robert Nighthawk and the guitarist who became his mentor, Albert King.

Mr. Seals began visiting Chicago in the 1960's, and in 1971 he settled there, began sitting in with bluesmen who included Junior Wells and Hound Dog Taylor, and started playing regular weekend shows at the Expressway Lounge. Bruce Iglauer, a blues fan who had recently started Alligator Records, heard him and released his first album, "The Son Seals Blues Band," in 1973.

For the next decades, Mr. Seals toured nationally and then internationally at clubs, concerts and festivals. He was nominated for a Grammy Award as one of the performers on the 1981 live album "Blues Deluxe," and he received W.C. Handy Blues Awards in 1985, 1987 and 2001. He also performed at the Clinton White House.

Mr. Seals recorded eight albums for Alligator and then made two albums for Telarc. The jam band Phish regularly played his song "Funky Bitch," and Mr. Seals made guest appearances with them. Trey Anastasio, Phish's guitarist, sat in on a remake of "Funky Bitch" for Mr. Seals's 2000 album, "Lettin' Go" (Telarc). In 2002, Alligator released a compilation, "Deluxe Edition."

In 1997, Mr. Seals was shot in the jaw by his wife, whom he later divorced, and in 1999, complications from diabetes led to the amputation of part of his left leg. But he continued to perform until two months ago. He is survived by a sister, Katherine Sims of Chicago, and by 14 children.

Originally issued in 1973 on Bruce Iglauer's then-new Alligator label, this is the late, great Frank "Son" Seals' debut album, a supremely rough, tough affair with some stinging lead guitar playing, tougher and less polished than Stevie Ray Vaughan and at least as gritty as Johnny Winter and Buddy Guy.

Son Seals mines classic Chicago blues grooves on the swinging "Look Now, Baby" and the slow "Cotton Pickin' Blues", and other highlights include the grinding (and thoroughly unsentimental) "Your Love Is Like A Cancer", the fiery "Mother-In-Law Blues", a genuine blues in the vein of Elmore James, and the funky "How Could She Leave Me". But there are really no weak tracks here at all, just forty minutes of slashing guitar playing and raw bluesy goodness played by the stripped-down four-piece band (Seals, bassist John Riley, drummer Charles Caldwell, and organ player Johnny "Big Moose" Walker").

These compositions are less influenced by soul and rock than Seals' albums would be just a few years later, so there are more traditional A-A-B-arrangements here than on his other records, and his lead guitar playing is sharp as shards of broken glass, as gritty as anything you'll ever hear on a 70s blues record. And while "The Son Seals Blues Band" is perhaps not as instantly memorable as the best work of Muddy Waters or Howlin' Wolf, it is a very enjoyable record even without an obvious replacement for "Hoochie Coochie Man"!

This is Son Seals at his stripped-down, darkly contemplative best. His up-tempo songs seem to get the most attention and are what built his career but his mastery of slow blues numbers like "Sitting At My Window" and "Now That I'm Down" is unmatched. The mixing of the guitar and hammond organ work to create a very heavy, tube-amp kind of groove which works well no matter the pace. Son Seals chording is as haunting as it is mysterious and for a guitarist is frustratingly difficult to duplicate. His guitar must have been in one hell of a mood that day in the studio. Bruce Iglauer had a talent for getting the best work out of largely unknown regional blues guitarists - we have him to thank for a wealth of energetic, caged-beast blues albums from inspired (and endangered) artists like Seals, Hound Dog Taylor and Albert Collins. This is one of the best of that early era.