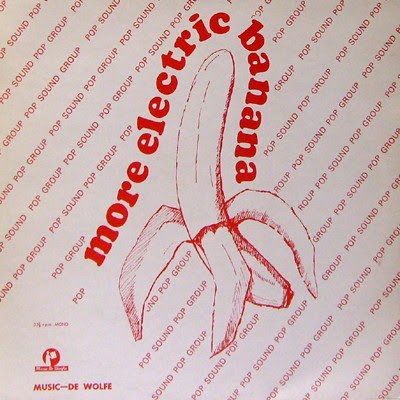 
The backside states "Vocal Version with Accompaniment". Side A contains vocal versions, Side B contains instrumental versions.

NOTE - there are 2 versions of this release and it is extremely important to know this, as the re-issue is extremely common and easy to find. Whereas the geniune original 1st Pressing is very rare indeed:-

1) Original 1st Pressing - 3 colour label + most importantly (and logically!) the De Wolfe label logo matches the DeWolfe logo on the cover! This label was available from the day this LP was first issued right through to the end of 1969.

2) Later 1970s re-issue with orange labels and the later 'DW' label logo. These are very common as re-issues on this label were available for 6 years between 1970 and 1976. DeWolfe also never changed the cover, so these common re-issues are easy to spot as the re-issue 'DW' label logo is completely different to the one on the cover!

‘More Electric Banana’ is 100% Banana with no brass added to the tunes. The album has two De Wolfe composed tunes and four band originals. The album is much edgier with Taylor’s guitar on display throughout and is much more reflective of The Pretty Things’ R & B roots. ‘A Thousand Miles From The Sun’ one of the group penned tracks is a mid-tempo rocker featuring great guitar work from Taylor and would’ve fit nicely on an album by The Pretty Things ‘Grey Skies’ and ‘I Love You’ are other standout tracks thanks to Taylor’s guitar work. The LP’s six tunes are presented in both vocal and instrumental versions and had great possibilities had it seen commercial release. Even without such availability the album is well known and respected by rock music fans of the days and not limited to those of The Pretty Things.
Posted by Zen Archer at 12:11:00 AM