Skeleton Crew
1986
The Country of Blinds 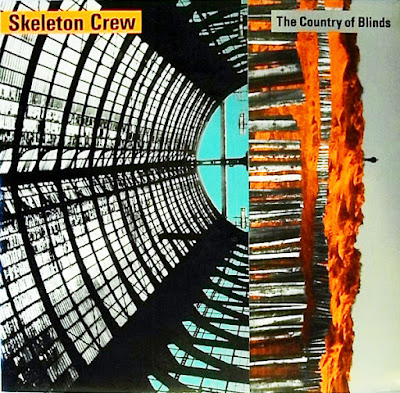 For 1986's The Country of Blinds, Frith and Cora added harpist Zeena Parkins to the mix, and she helps them beef up the sonics of their project from amateurish to something approaching professional. Sure, they still have musical ADHD—the title track changes genres and sounds about 54 times in four minutes—and sure, they are still trying to bring down the system through aural terrorism; but now their riffs mean something and go somewhere. "Bingo" combines Devo-jerk with strange Laurie Anderson-type fiddling to underscore the song's message of... okay, I have no idea what it means, but it sure is fun when it turns into a Celtic hoedown at the end. You can hear how big these guys could have been on tracks like "Birds of Japan" and "Man or Monkey"—good thing they got afraid of how good they were and broke up right after this recording session, huh?

When Skeleton Crew expanded from a duo to a trio, they didn't do anything obvious like hiring a drummer - instead, they added a third one man/woman band to the proceedings. Dave Newhouse of the Muffins joined for a while, and subsequently the third Skeleton was Zeena Parkins (News From Babel, Bjork and many other collaborations) on harp, accordion, organ, vocals and more drums. The result was another fine album of off kilter RIO songs and strangeness.
The Country Of The Blinds is in the same style as Learn To Talk, but there are a number of interesting contrasts. The expanded line up makes for a fuller sound, although things are no smoother than previously; Fred Frith remains the principal vocalist, but there are far more harmonies and shared vocals this time around; and the use of tapes has been abandoned. Overall there seems to be less raw spontanaeity than on the previous outing, but the material is stronger musically and lyrically. Fred Frith's guitar is less prominent, but this album contains his best violin work since Art Bears' debut album. Zeena Parkins adds some superb Sun Ra style organ to the proceedings, and her electric harp is played off against the strings to superb effect. Tom Cora is as inventive as ever on cello and bass, and also adds some demented accordion to the mix. The drumming is as powerful and unpredictable as previously - on Man Or Monkey they manage to sound like a RIO version of King Crimson's double trio line up with only half the number of musicians. Other stand out tracks are The Border, an almost normal song structure subverted by some impossible drumming and a brilliant call and response vocal arrangement, and the comparatively lengthy You May Find A Bed, where Fred Frith finally cuts loose with some lead guitar. The latter track also boasts some wonderful lyrics with echoes of Robert Wyatt's Dada inspired ramblings - 'There is no convenient time to break your leg' observes Fred Frith, and makes the same comment about (among other things), starving, having a flat tyre and having a child. Both Skeleton Crew albums contain some superb lyrics, but it is on Country Of The Blinds that lyrics and music really complement each other to near perfection. The instrumental interludes are also spellbinding; at times it seems impossible that three human beings are producing this noise in real time, but live recordings show that they could and did.

Skeleton Crew broke up after this album, Fred Frith remarking that they were starting to sound like a normal rock and roll band. This remark should be taken with a pinch of salt, unless your defintion of normal rock and roll is The Magic Band and Pere Ubu, but there is a grain of truth in it. While in many ways stronger than the debut album, Country of the Blinds doesn't have quite the same manic energy and inventiveness as Learn To Talk. It's still a brilliant slice of 80s RIO/Avant prog, however, and is strongly recommended to lovers of the off beat and bizarre.

Overall, this is a very interesting document of three very creative people who were in love with their own weirdness and kind of afraid of success. It's also a great way to wake up in the morning. But if you are a sensitive jazzhead type, lay off this slider and wait for the next fastball to come whizzing down the middle.
Posted by Zen Archer at 6:13:00 PM