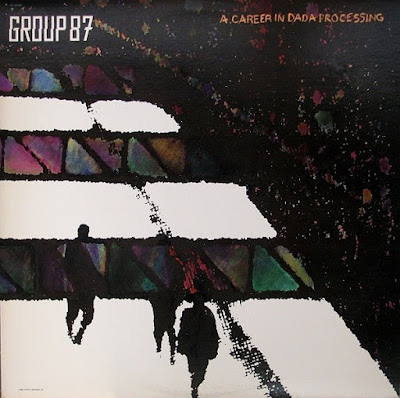 Group 87’s second album came out nearly four years after their debut, and probably wouldn’t have happened at all had former Blood, Sweat & Tears drummer and newly- hired EMI/Capitol executive Bobby Columby not been the catalyst for the band’s signing with Columbia Records back in 1980. Columby was a firm believer in Mark Isham in particular, and after Columby left Columbia and moved on to EMI he was interested in acquiring new talent for the label but lacked major investment capital. A Group 87 album was an attractive option considering the former members of that band were all local, independently successful, had a polished sound, and were a known and reliable commodity.
By 1984 Terry Bozzio had found fame and fortune by planting his scantily-clad wife in front of a microphone as the voice of Missing Persons, and had secured former Group 87 bassist Patrick O’Hearn to support the effort. So the former trio became a duo, and was in need of a drummer. While Michael Barsimanto and Wire Train drummer Brian MacLeod were credited on this second and final release, the drum tracks were primarily recorded by Mike & the Mechanics member Peter Van-Hooke.

And in large part the drum work is electronic, as is much of the album’s other instrumentation. That is the most noticeable difference between this and the first Group 87 album. From the opening “Postcard from the Volcano”, the breadth of synthesized music is quite surprising, and is in large part what makes this album a bit of a disappointment. The compositions are for the most part as fresh and tightly constructed as the first album, but the dull thud of digital drums and layers upon layers of synthetic keyboards give the music a sheen that at times becomes too predictable, and even too polished. Other than some doodling guitar work from Isham, the first two tracks (including “Pleasure in Progress”) are mostly programmed sounds tapped out on a couple of keyboards. This may have been innovative in 1984, but much like some of the early Kraftwerk albums it doesn’t stand up all that well in today’s hyper-digital computer age where pre-teens can mix identical works on a Casio connected to their laptop.

On “The Mask Maker” Isham vacillates a bit between keyboards and his trumpet, and the soft brassy tones of that instrument bring the sound back closer to what made the band’s first release so inviting. I’m not quite sure what Maunu is doing on guitar, but it sort of sounds acoustic, which means it probably isn’t or you’d think I’d be sure. This is a very slow and delicate tune, almost a new-age number, which is not surprising considering both these artists would lean that direction in their careers following this release.

Isham keeps the trumpet going on “The Apple Bites Back” and even adds some mandolin, which combined with Maunu picking up the tempo a bit on guitar makes this an upbeat and energetic piece. Like many of the songs on their first album though, Isham stops short of really developing the composition and it comes off as kind of a sound- bite demo. Too bad, this one had real potential.

“Lough Erin’s Mist” is a short, almost ambient track that is pleasant enough but never really seems to go anywhere. Not sure what the point was to this one.

The title track is both the longest and most interesting track on the album, with a combination of digital and some acoustic drumming, long and spacey trumpet work intermixed with the keyboards, and what almost comes off as a slight climax toward the end. Again, this is more new-age than it is neo-progressive or anything else, but Maunu’s guitar work is quite innovative and the keyboards at least blend well instead of sounding canned. Also Isham experiments with some harmonic keyboard progressions that are rather unusual and so are at least interesting.

Other than some slightly jazzy guitar, “Angels and Obelisks” is another purely ambient track that seems to be heavily inspired by some of the stuff Andy Summers and Robert Fripp were doing together around the same time, although a bit less energetic. Here again Isham’s trumpet (and violin!) give some texture to an otherwise rather dull tune.

The album (and the band’s career) closes with “The Death of Captain Nemo”, a song whose title says ‘epic’ but whose score is mellow. This thing is more about trying to make keyboards sound like running water and slow waves than it is about any kind of progressive arrangement. Kind of a disappointing end to kind of a disappointing album.

This is a really interesting band that had an opportunity to have a real influence on a whole generation of post-rock and experimental artists that would come along starting just a few years after their demise. But instead the band plays it very safe on this release, mixing then-popular digital keyboards and fake drums with spacey tempos and flat rhythms. I’m going to give this one three stars, but in reality that is just rounding off what is probably a 2.6 star effort. If you want to know what this band was really capable of, buy their first album, or pick up Isham’s self-titled solo album of upbeat new- age music that came out six or seven years after this, or try Maunu’s inspirational but hard-to-classify solo debut ‘Warm Sound in a Gray Field’ instead.