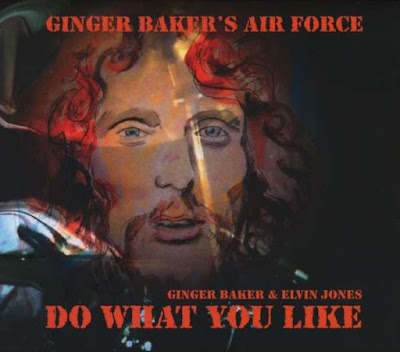 After Ginger Baker wrote music history with Cream and Eric Clapton broke up the successor band Blind Faith after only one LP and a U.S. stadium tour, Baker had the financial backing to set off on his first solo project. 'Ginger Baker's Air Force' began in 1970. It was Ginger's idea to mix the music of his African roots with popular Western music. It was to become the first 'World Music' band in music history, long before this music category even existed. The last tour began on January 29, 1971 in Leeds and the next day Air Force played in the 'Lyceum' in London, where the long awaited meeting between the two great drummers Elvin Jones & Ginger Baker took place. After Air Force had played for a half hour, Elvin came on stage and played 'Aiko Biaye' with Baker. 'Do What You Like' followed, during which Ginger and Elvin delivered a drum battle of the highest quality. On February 20, 1971, Air Force gave its last concert in England. Ginger Baker's Air Force had become music history after just 14 months.

Ginger Baker never wanted to be thought of as simply a rock drummer. And on Feb. 1, 1971, at the Lyceum in London, he got a definitive chance to measure himself outside of the genre. That's when he faced off against jazz legend Elvin Jones in a legendary drum battle.

Baker arrived with no small amount of bravado. "I do have a God-given gift that only a few drummers have – and it is a gift, it's not something you can work at," Baker once said. "Keith Moon? John Bonham? No, I wouldn't put them in the same frame. They were drummers, but they weren't in any way exceptional in my opinion."
Still, how would Baker fare against a musician who had held his own amid the torrent of John Coltrane's saxophone? And how'd this unlikeliest of pairings ever come to be? 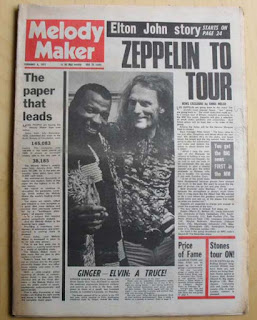 Seems a writer for Life magazine played "Do What You Like," a song from Baker's post-Cream band Blind Faith, for Jones – and he'd clearly heard of Baker's own jazz-leaning aspirations. The article, titled "Elvin Jones' Kinesthetic Trip," included some cutting criticism directed at Baker. "Nothing's happenin'," Jones told Albert Goldman. "Cat's got delusions of grandeur with no grounds. They should make him an astronaut and lose his ass." Perhaps worse for Baker? Jones also heaped praise on Moon in the same piece.

Baker apparently intimated that Jones – then in his forties – was too old to play anymore. Later, as momentum grew toward the drum battle, Jones was said to have issued a more direct challenge. "Baker had better put his drums where his mouth is," Jones reportedly said during a performance at Ronnie Scott's, a prominent London jazz club

By this point, Baker was leading his own all-star group, Ginger Baker's Air Force. The band included Baker's recent Blind Faith bandmates Steve Winwood and Ric Grech, as well as Denny Laine (Moody Blues, Wings), Alan White (Plastic Ono Band, Yes) and Chris Wood (who'd been in Traffic with Winwood), among others. A 1971 tour, which began on Jan. 29 in Leeds, brought Baker to the Lyceum a few days later, and a date with musical destiny.

Air Force played for about a half-hour before Jones took his place behind a simple Gretsch four-piece kit. Baker introduced him, with a flourish of generosity, as "a man he'd admired since he was a boy." They then launched into an explorative, 20-minute take on "Aiko Biaye," a Nigerian folk song that has remained in Baker's set list for decades. At that point, they were playing in tandem. The pair then tangled more directly throughout the course of "Do What You Like" – an ironic moment, considering the song's central placement in this feud.

Commentators back then seemed of two minds on who emerged victorious, with jazz writers choosing Jones while rock scribes sided with Baker. Fans of both genres got to make up their own minds when the drum battle finally emerged as the title track from an archival Air Force release in 2015. (Jones died in 2004.) 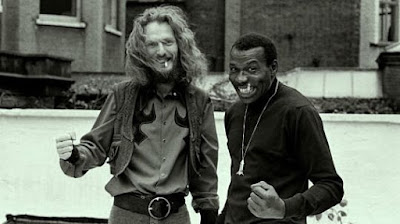 Baker, for his part, said he did more than hold his own. He proved he belonged among jazz's leading lights. "I battled Elvin Jones, Art Blakey, Phil Seaman, Max Roach and Tony Williams," Baker said years later. "Bonham played in [Led] Zeppelin. If he was still alive today, ask him! How I am grouped with Bonham and Moonie is laughable."

Jones and Baker memorably hugged at the end of their battle, prompting Melody Maker to publish a headline trumpeting "A Truce!" Unfortunately, Ginger Baker's Air Force broke up at the end of their 1971 tour, performing for the last time in England on Feb. 20.
Posted by Zen Archer at 10:40:00 PM