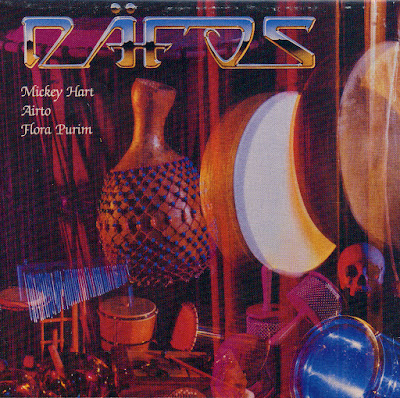 "The Reference Recordings versions are the only authentic representations of this music.
The later Rykodisc versions were improperly mastered, RR used a customised, non-standard tape recorder so the masters can only be played back correctly on the RR tape machine which Rykodisc did not have access to."

The above is verbatim from a letter from J Tamblyn Henderson, president of Reference Recordings, to The Absolute Sound magazine Issue 59 May/June 1989.
So caveat emptor on the Rykodisc releases.

Däfos is a musical ethnography of an imaginary country created by Mickey Hart and Airto Moreira. The album was recorded live in San Francisco as a celebration of percussion music with the help of Jose Lorenzo and his Brazilian percussion group Batucaje. Originally released in 1983 and later reissued as part of “THE WORLD” series (now part of the Mickey Hart Collection made available by Smithsonian Folkways), the album was produced without the use of overdubs. The songs lead listeners on a journey across deserts and icecaps, through the fictional geography and mythology of Däfos, and features traditional Brazilian, Indonesian and African instruments, woodwinds and electric bass guitar.

When it was originally released on lp it was an audiophile recording played at 45 rpm. In other words, it was short. The cd has a long bonus live track that is somewhat long. Most of the album is very quiet prompting you to turn up your stereo. Be careful, the volume does increase. This is a wonderful "soundscapes" album with many great songs and the sound is superb. It was recorded at the Japan Center Theater in San Francisco without an audience and it really does capture the sound of the room well. This is probably not the kind of album that you're going to listen to alot, but when you do you'll really enjoy it.

I have the original LP which is from Reference Recordings at 45 rpm, done by Dr. Johnson, of course. He achieves great reality in the recording with a truly deep and wide sound-field. This makes the experience of the recording much more like "being there" with the performers. I agree with one other reviewer that this is not music you will listen to with great regularity, but when you want to know what can be done with a good recording and how it can (and SHOULD) sound, this is one of the recordings you'll turn to. This was recorded in analog with minimalist microphone numbers, but the attention to the recording equipment, etc, pays huge dividends. Most recordings done at high sampling rates in digital will not sound this good. Fortunately, this all translates into digital for this CD very nicely and does not appear to lose any appreciable ambience, etc. The added track not on the LP is "Psychopomp" and when pushed in volume will give you an idea of what your speakers will do for you. Fun fun recording.
Posted by Zen Archer at 7:39:00 PM