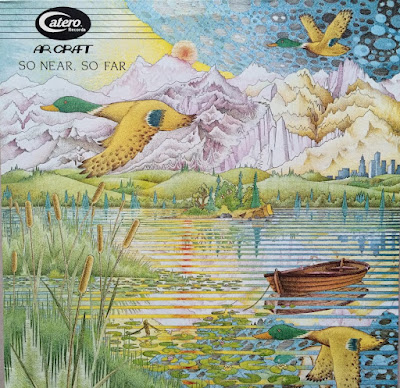 A mix of orchestral/dreamy New Age and mellow Jazz Fusion by this one-shot quartet of future Santana bassist Myron Dove, American drummer Jack Dorsey, violinist Bruce Bowers and Ancient Future keyboardist Doug Mckeehan.Sounds often like a stripped-down JEAN-LUC PONTY edition with some OLDFIELD/GANDALF touches, as there's a lot of smooth violin controls and the piano is omnipresent along with some mellow synthesizer.Lots of good interplays, often with ethnic vibes throughout, and impressive piano interludes.Harmless and relaxing stuff.

The goal by Doug McKeehan in this production was to make a small group sound like a broader orchestra. And mission accomplished. In my opinion, this is one of the best "new-age" or "fusion" albums ever created. I purchased the vinyl version when it was released and have been looking for the CD for years and finally have found it. I would play this record over and over in my apartment in Denver and the music played in my head when I would go for long runs. Truly an amazing album that has been overlooked by so many. A must have if you appreciate music of Ancient Future and 80's-90's style new age genre. But one could almost place this album in a category of its own. You will love it!

Really forgotten gem of a sort of crossroad's between light jazz meets "new age" instrumental music (hey it was the awesome 80's when people where still challenging the public's ears). Reminds me of Shadow Fax minus Chuck Greenberg. There's violin, tons of synths, piano and drums (acoustic & electronic). I hear a influences such as European classical, middle eastern and a smattering of lovely minimalism. Truth be told today this would be lumped into the world music category but there is a jazz injection and at times the rhythms are very tight and challenging to the average "non" jazz ear. Very nice use of the Prophet 10 and Synergy synthesizers esp some of the brilliant orchestrations. I wish someone would re-release this on a damn cd!