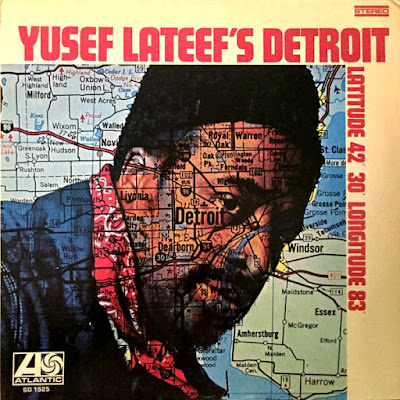 After issuing the spiritually compelling and contemplatively swinging Complete Yusef Lateef in 1967, Dr. Yusef Lateef's sophomore effort for Atlantic shifted gears entirely. Lateef chose his old stomping grounds of Detroit for an evocative musical study of the landscape, people, and spirit and terrain. Lateef spent the late-'50s in the city recording for Savoy, and this recording captures the memory of a great city before it was torn apart by racial strife and economic inequality in 1967. There is no way to make a record that suggests Detroit without rhythm, and Lateef employs plenty of it here in his choice of musicians: conga players Ray Barretto and Norman Pride; Tootie Heath on percussion; Cecil McBee, Roy Brooks, and Bernard Purdie; electric bassist Chuck Rainey; electric guitarist Eric Gale; pianist Hugh Lawson; and a string quartet that included Kermit Moore. In other words, the same band from the Complete Yusef Lateef with some funky additions. The string section, as heard on the opener "Bishop School," "Belle Isle," "Eastern Market," and "Raymond Winchester" is far from the pastoral or classically seeking group of recordings past, but another rhythmic and melodic construct that delves deep into the beat and the almighty riff that this recording is so full of. For all of the soul-jazz pouring forth from the Blue Note and Prestige labels at the time, this album stood apart for its Eastern-tinged melodies on "Eastern Market"; the "Black Bottom," gutbucket, moaning bluesiness on "Russell and Elliot," with Gale and Lateef on tenor trading fours in a slowhanded, low-end groove; and the solid, Motown-glazed, rocking Latin soul of "Belle Isle." The album ends curiously with the nugget "That Lucky Old Sun," played with a back porch feeling, as if the urban-ness of the set, with all of its polyrhytmic intensity and raw soul, had to be tempered at the end of the day with a good-old fashioned sit in the yard as the city's energy swirled around beyond the borders of the fenced lot. Lateef blows a beautiful tenor here, uing a motif from Sonny Rollins' version of the tune and slides it all the way over to Benny Carter in its sheer lyricism. It's the perfect way to close one of Lateef's most misunderstood recordings.
Posted by Zen Archer at 7:26:00 PM