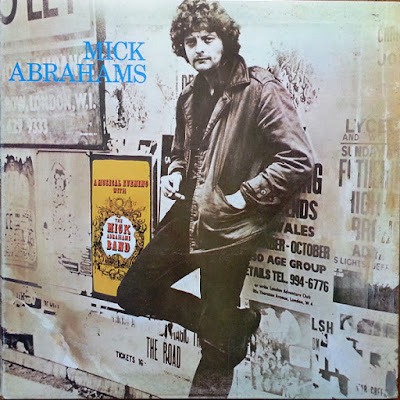 The roots of Mick Abrahams' musical career were typical of aspiring guitarists in the mid-sixties, taking in stints with R&B groups like The Hustlers, The Toggery Five, Screaming Lord Sutch, Neil Christian's Crusaders (replacing Jimmy Page) and his own McGregor's Engine.

By late 1967 Mick had become a founder member of Jethro Tull, and throughout 1968 the band built up a reputation based on the already distinctive blues guitar of Abrahams and the flute playing and wild stage persona of Ian Anderson. The band's unique blend of blues, jazz and rock was reflected in their first album This Was, an immediate UK chart hit. However, having two such strong personalities as a twin focus was always going to be a recipe for musical incompatibility, and at the end of 1968 Abrahams jumped ship.

After quitting Jethro Tull Mick formed his own band, called Blodwyn Pig. They released two albums "Ahead Rings Out" (1969) and "Getting To This" (1970). At that stage Blodwyn Pig looked destined for great things - but the old ogre of musical differences reared its ugly head, and Abrahams left his own band. Blodwyn Pig soldiered on for a while, but Mick's presence had been too vital a factor in their success, and the Pig died.

The early seventies saw Mick on 'Top Of The Pops' and 'In Concert' on Radio One with The Mick Abrahams Band, showcasing two fine guitar-driven rock albums in (A Musical Evening With) Mick Abrahams and At Last. The band enjoyed success throughout Europe but record company support was less encouraging and, after a short-lived Blodwyn Pig reunion in 1974 (immortalised via another Radio One live broadcast), a disillusioned Mick Abrahams effectively quit the music business.

1st album by British guitarist / vocalist Mick Abrahams, one of the most underrated guitar players in the history as far as I'm concerned. Abrahams first achieved recognition as a founding member of Jethro Tull, with the release of their debut album "This Was", where he plays some incredible guitar licks, which earned him comparisons with "God" Eric Clapton. A personality clash and musical differences between Abrahams and Ian Anderson led to his decision to leave Jethro Tull and form the brilliant Blodwyn Pig, one of the earliest and best Jazz-Rock / Blues Fusion bands ever. The original Blodwyn Pig lineup lasted just under two years and recorded two outstanding albums, breaking up prematurely. Abrahams then formed the Mick Abrahams Band, which is featured on this album. In later years Abrahams was to reform Blodwyn Pig and record several more album with that group (from the 1990s on) as well as leading the Mick Abrahams Band. His amazing guitar playing is unfortunately only recognized by a relatively small circle of fans, although in retrospect his consistently excellent performances in the last five decades are quite unparalleled. This album was recorded soon after the demise of the original Blodwyn Pig and features a great lineup of Mick on guitar, Bob Sargeant on keyboards and guitar, Walt Monaghan on bass and Ritchie Dharma on drums. The material, all written by Abrahams, is a great example of Blues-Rock, the genre in which Abrahams feels most comfortable. The album lost nothing of its charm and beauty and is certainly worth of an honorable place in any serious record collection.