Emil Richards And The Microtonal Blues Band - 1969 - Journey To Bliss

Emil Richards And The Microtonal Blues Band
1969
Journey To Bliss 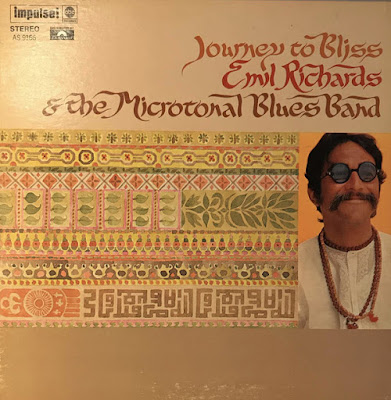 In his masterful book The House That Trane Built, Ashley Kahn refers to this album's "cultural curiosity" and "otherworldly" nature. According to Kahn, Impulse under Bob Thiele was always looking for cross-over records and latched on to the emerging hippie scene in California.
Records such as this, Gabor Szabo's Jazz Raga, Bill Plummer's Cosmic Brotherhood (read about it here) and Gary McFarland's Point of Departure were all intended to be pop-jazz, rock-jazz cross-over hits. Unfortunately they rarely were. The slightly split nature of record label is shown in the linear notes which try to draw a parallel between Richards' modal experiments and those of his label mate Coltrane. Yet at the same time Richards reveals that he hopes that "the kids" will dance to his music. Perhaps - listen to this opening track and see what you think. Tommy Tadesco's guitar and the leaping percussion work do make it possible to dance to, but I can't see many people in late 1968 choosing this over the Doors!

Richards had a pedigree as a jazz musician having played with Charles Mingus, Shorty Rogers and Don Ellis by the time he made this record. All of whom would also experiment with some fairly out-there music. However, at the same time he had also developed a career as a studio musician and had played with some more pop-orientated musicians such as Sinatra and Doris Day.
He also appeared on the Zodiac Cosmic Sounds record and I can't help thinking that record and Journey to Bliss are very similar. Both utilise a wide variety of instruments, although there is no Moog on this record. Both also play on some very sixties ideas about spirituality and belief as well as a rather over-serious exploration of so-called 'alternative' views of life. Both records also included a number of LA session musicians. Hal Blaine, Carol Kaye, Mike Melvoin on Zodiac Cosmic Sounds and Dave Mackay, Tommy Tedesco and Joe Porcaro on Journey to Bliss. And although the Journey to Bliss voice-over is not as smooth as Cyrus Faryar there are distinct similarities, not least the portentous seriousness of it all.

There is something to my ears that is just too 'clean' and 'studio' to convince that this is a serious record. I am reminded of another vibes player, John Sangster, who also came from a jazz background, played a great deal as a session musician as well as dabbled in 'exotic' sounds.
There is, I think, also a touch of exotica in this record. Many of the musicians on the exotica records of the 50s had jazz backgrounds and Martin Denny clearly wanted to be Dave Brubeck!
Just listen to Mantra and imagine it slightly slowed down with some ridiculous bird calls. Reminds you of Martin Denny doesn't it?

The second track, Bliss is really the younger brother to the four part B side track Journey to Bliss, with Richards playing a very similar riff on a similar instrument (I'm afraid I just don't know what it is and there are 58 to chose from according to the sleeve! There is a sound at 2.40 in the clip that I love. It has that slightly mad Radiophonic quality that Delia Derbyshire's treated sounds had. Great stuff.

Side One finishes with Enjoy Enjoy. As the sleeve notes point out it is "in a twelve-based meter and can be counted (take a deep breath) as 32331 or 57 or 444 or 3333 or 6/8 or 3/4 or 12/8 or 4/4 or, as Emil puts it, as ????!!! Indeed." Reminds me of some of the extravagant sleeve notes for exotica and easy records. Through the careening percussion Tedesco's guitar once more adds a dash of rockiness together with Dave MacKay's keyboard. It doesn't last long and the whole track slides into atonality before coming together for a joyful reprise.

One Side Two we get back more firmly into a very Californian attempt to 'trancend' using 'eastern' methods. And its rather fabulous, if somewhat of its time. Using what sounds like all 58 instruments and Barbara Gess's poem intoned by, I think Emil himself, the suite flows forward in a dream-like and possibly drug-like state. Here is the second half of it.

In ways in which exotica satisfied the desires of Americans for far away places without the need to leave their homeland, so to did albums like this. By emphasising the jazz element and replacing the obvious tropes of exotica with a new psychedelic 'now' image records such as this appealed to a new audience who would never have listened to Arthur Lyman but perhaps ultimately wanted the same thing - the thrill of a new world without leaving home.