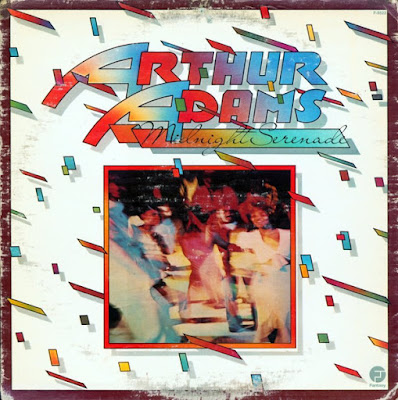 This is the third solo effort by venerable blues/jazz/funk session man Arthur Adams. Having seen his first, second and fourth floating around I thought I'd fill another blank for the booty-bumpin' blogosphere.

Although the line-up doesn't jump out out at you like it did on his previous effort, Home Brew, don't front. Most of these cats were assembled from Blue Thumb/Fantasy stalwarts and the roster includes a good portion of Side Effect/L.A. Boppers. Produced by the Crusaders' Wayne Henderson, with whom Arthur maintained a close working relationship for many years, it's definitely a product of its time and place. Although it features some fancy fretwork and catchy compositions, it's very much a pop-oriented outing with a bit less of the raw blues or fiery funk that earned Adams his rep as a smokin' session man in the 60s and early 70s.

Official Site Bio
Arthur Adams was born in a small town in Medon, Tennessee; twelve miles from Jackson, Tennessee. Jackson is eighty-four miles north of Memphis, Tennessee. Arthur attended Tennessee State University for one year, then, joined Jimmy Beck's Band in the early sixties. He traveled throughout the south and moved to Los Angeles, California in the late sixties where he began his recording and writing career. His first album "It's Private Tonight" is on Blue Thumb records. "Home Brew" and "Midnight Serenade" are both on Fantasy records. "Back on Track" is on Blind Pig records, and "Soul of the Blues" is on PMRC records.

Arthur has played and recorded with B.B. King, wrote the song "Mean and Evil" and "Something Up My Sleeve" for B.B. King. He also wrote the song "Love and Peace" for Quincy Jones' grammy award-winning Walking In Space album, "Somebody Is Gonna Miss Me" for Sam Cooke on the Twistin the 'Nite Away album, "Truck Load of Loving" for Albert King, played guitar on the Nick of Time album for Bonnie Raitt, Jimmy Smith's album Root Down, Jerry Garcia's Garcia, the Crusaders' Street Life (as well as Pass The Plate, Hollywood and almost all of their 70s output), Johnnie Guitar Watson, Dr. John and many more (including Charles Kynard's Woga, Gene Ammons' Free Again, David Axelrod's Marchin', Bobby Bryant's Swahili Strut, Phil Upchurch's Darkness, Darkness, Letta Mbulu's Letta, Cal Tjader's Demasiado Caliente and Lowell Fulsom's seminal Tramp to name but a few).

Arthur appears in the movie "Town & Country", starring Warren Beatty and Goldie Hawn where played and sang the song "I Can't Stand the Rain". Arthur's freight train guitar and soul-steeped vocals, combined with his prolific predilection for writing great material (often in conjunction with award-winning composer Will Jennings), are all brilliantly showcased on his Blind Pig debut Back On Track, his first album in two decades. The set features two sparkling duets ("Got You Next To Me" and "The Long Haul") pairing Adams with his principal stylistic influence, the great B.B. King, and his regal presence is quite an honor for his long time friend Arthur.

AMG Bio by Bill Dahl
As house bandleader at B.B. King's Los Angeles blues club, Arthur Adams cranks out searing blues for the well-heeled tourists who trod the length of Universal Studios' glitzy City Walk. But the great majority of his transient clientele can't begin to imagine the depth and variety of the guitarist's career. The shaven-headed Tennessee native began playing guitar in the mid-'50s, taking early inspiration from the man whose name adorns the club that later employed him (Howard Carroll, axeman for gospel's Dixie Hummingbirds, also was a principal influence). He studied music at Tennessee State University, playing briefly with the school's resident jazz and blues aggregation.

Touring as a member of singer Gene Allison's band, Adams found himself stranded in Dallas, where he dazzled the locals with his fancy fretwork. Relocating to L.A. in 1964, he began to do session work for jazz great Quincy Jones, and cut singles for the Bihari Brothers' Kent label and Hugh Masekela's Motown-distributed Chisa imprint. His late-'60s R&B sides for the latter were co-produced by Stewart Levine and featured support from most of the Crusaders. Adams' 1970 debut LP for Blue Thumb, It's Private Tonight, was co-produced by Bonnie Raitt and Tommy Lipuma.

Adams continued to record solo albums through the late '70s, but by the '80s he retreated from the forefront, only ocasionally moonlighting as a session guitarist for various groups. In 1992, he wrote two songs for B.B. King's There Is Always One More Time album and 1999 saw Adams' first solo release in 20 years with Back on Track, which featured King as a guest guitarist. In 2004, Adams continued rebuilding momentum with the release Soul of the Blues.
Posted by Zen Archer at 4:53:00 PM