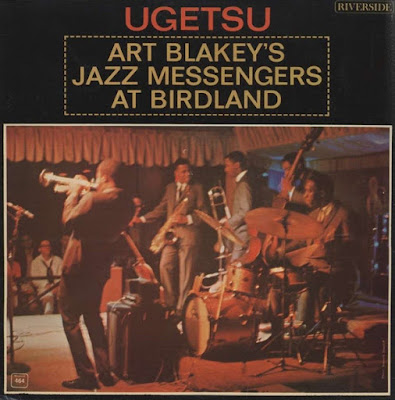 Once again recorded live at Birdland, Art Blakey And The Jazz Messengers gave yet another coup performance at this prestigious New York jazz club in June of 1963 which became another solid landmark hit. Released the same year by the Riverside label, they deeply impressed the audiences with another astounding set of first class performances, riveting solos, sharp originality, exhilarating virtuosity and outrageous swing. A band heralded as one of the top four line-ups Blakey have ever led, music specialist and jazz critic Neil Tessler wrote in the CD liner notes: “There’s something special about Art Blakey and his band live and this album is certainly no exception”, whom he pointed out. “That’s partly because this was the natural environment which these guys were working night after night in the clubs. There are certain things that can happen in a live recording that don’t always happen in the more artificial record-ing studio”. Right along with other iconic tracks featured, including Wayne Shorter’s One By One and On The Gina, Curtis Fuller’s Time Off and the title track--written by Cedar Walton, the live classic also features (as usual) a well-performed reindition on the standard ballad I Didn’t Know What Time It Was. Plus what you will even get on Ugetsu are four great bonus tracks, including Eva, George Sheering’s bebop classic Conception, Thelonious Monk’s The High Priest and Miles Davis’ ‘pre-electric’ grand finale song The Theme, where as they add to the finishing touch on this spellbinding live masterwork that definitely ranks as one of Blakey’s greatest and most honoured achievements.

The sextet with Fuller, Hubbard, Shorter, and Walton is my most favorite period of the Jazz Messengers. The ensemble sound is thick and diverse due to the mix of three different horns. The repertoire is strongly based on the compositions by the members, which are very well written. Blakey's drumming is thunderous, pushing forward the soloists. This recording captures the band in its top form in a live setting. A listener gets the feel for how the members interacted. Of the several albums from this period, I'd place this among the top three along with "Mosaic" and "Free For All". This is a must-have not only for Messenger fans, but for all Hard Bop fans.

Ugetsu, a 1963 live set from the original Birdland, finds Art Blakey & His Jazz Messengers at the peak of their powers with one of their strongest lineups. The group primarily recorded sessions for Alfred Lion's Blue Note label, but this Riverside date is as strong as any of their previous outings. Having acquired the services of trombonist Curtis Fuller in 1961, the Messengers' front line was its most robust ever, with Wayne Shorter and Freddie Hubbard consistently turning in some of their best performances. Rounding out the rhythm section with Blakey are the equally powerful Reggie Workman and Cedar Walton. The Messengers' set list finds the majority of tunes written by musical director Wayne Shorter, as well as a few choice numbers from Curtis Fuller and Cedar Walton's title cut. The group is spurred on by a very receptive crowd, tempos and solos are spirited for the most part, and Blakey seems exceptionally energetic despite not performing a single extended solo himself. His between-song banter is equally entertaining. Overall, the group is precise, expressive, and swinging hard, delivering its message from the grandest platform of the time.