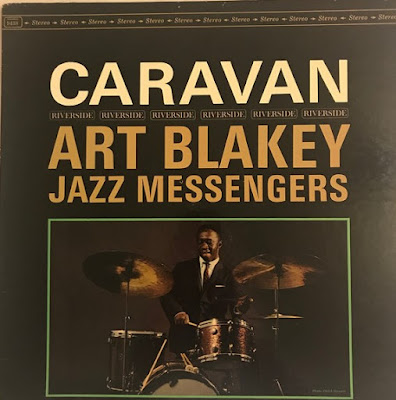 
By the time that jazz icon/bandleader/percussionist Art Blakey and his Jazz Messengers began recording for Riverside in the fall of 1962, Blakey had already been the spiritual center of the group for nearly 15 years. The unprecedented caliber of performers who had already passed through the revolving-door personnel reads like a who's who of 20th century jazz. On Caravan -- his first of several notable sides for the venerable label -- he is joined by a quintet of concurrent and future all-stars. Likewise, it could be argued that each has never again been presented in such a fresh or inspired setting as on these recordings. In order to establish with any authority just how heavy (even for purveyors of hard bop) the players in this band are, they need only to be named: Curtis Fuller (trombone), Freddie Hubbard (trumpet), Wayne Shorter (tenor sax), Cedar Walton (piano), and Reggie Workman (bass). With Blakey (drums) firmly at the helm, these Jazz Messengers deliver a scintillating synergy that doesn't sacrifice intensity for the sake of cadence. The trademark give-and-take that graces the laid-back and sophisticated pop and jazz standards "Skylark" and "In the Wee Small Hours of the Morning" likewise is responsible for the palpable energy brought to the sizeable contributions from Shorter and Hubbard -- which make up half of the album's material. The title and leadoff track liquefies Duke Ellington's original arrangement and ignites it, fueling this extended fiery interpretation. Hubbard's first solo harks back to his own recording of "Caravan," which can be heard on the Impulse release Artistry of Freddie Hubbard and was recorded earlier the same year. Coincidentally, that disc also features Curtis Fuller as well as a rare non-Sun Ra-related appearance from John Gilmore (tenor sax). Blow for blow, however, this reading has more than just an edge -- it possesses the entire blade. The melody snakes in and out of Blakey's strident flurry of syncopation. Another highlight is Shorter's interjectory solo, recalling his ability to succeed John Coltrane in Miles Davis' coterie. Among the original compositions, Shorter's upbeat "Sweet 'n' Sour" stands out as the most cohesive and ensemble-driven, although the singular group dynamic is well applied to the lively "This Is for Albert" as well. By contrast, Hubbard's "Thermo" is more angular -- taking full advantage of the musicians' aggressive chops. The 2001 20-bit remaster from Fantasy contains two bonus tracks: take four of "Sweet 'n' Sour" and take two of "Thermo." This release can be considered definitive Blakey, bop, and Jazz Messengers.

Art Blakey demanded bravado from his bands, and this one was perhaps his most intense and adventurous.

Debuting here on Riverside, “Caravan” opens with Blakey’s audacious drum solo — then moves quickly into an assertive and simply awe-inspiring take on a track once defined by Duke Ellington. A muscular trio of trumpeter Freddie Hubbard, bone player Curtis Fuller and saxophonist Wayne Shorter — swelling the Jazz Messengers to sextet status for the first time ever — clear the way for a impish signature by pianist Cedar Walton, then encircle the tune in ways both inventive and familiar.

If this album ended at the 9:44 mark, when “Caravan” concludes, it would still be one for the ages. But they were just getting started, quite literally.

Shorter, by then the veteran of the group, completely inhabits that role, offering new compositions in “Sweet n’ Sour” and the harmonically challenging “This is for Albert” that anchor both sides of this record. A surprise among two other cover tunes is “In the Wee Small Hours of the Morning,” which softens the familiar, driving Blakey sound with a touch of welcome romanticism — courtesy of Fuller’s warm and inviting work on the trombone.

Leave it to Hubbard to finish things on an appropriate note — burning down the house on the set closing, and appropriately named, “Thermo.”

Blakey, who was all about thermo, helped shape the 1950s reaction to the languid and occasionally featureless West Coast jazz — something Miles Davis launched with “Birth of the Cool,” then almost immediately distanced himself from as it began to become both pervasive and then moribund.

Hard bop, with Blakey as its champion, steered the music back into its African root system — as did the subsequent, far more commercial soul jazz movement. Both had, at their center, a basis in the blues, best heard on the records of soul jazz stars like Jimmy Smith and Julian “Cannonball” Adderley. Hard bop took the blues, though, and built a entirely different structure on top of it.

But his fierce, uncompromising records only heralded a flying-leap period of experimentation by jazz musicians that went even further away from European musical traditions in the latter half of the 1960s — a no-chords/no-compass approach personified by the sheets-of-sound recordings by John Coltrane, and mirroring the flights of fancy by signature pop artists of the day like the Beatles.

But before that came this period of sharp-witted, still vibrant recordings by guys like Blakey — a loving, if aggressive, look back into the roots of black music.

The exit of Lee Morgan, followed by the quick introduction and steady maturation of Hubbard and Fuller, confirmed Blakey’s place — even then — as one of the top finishing schools for young jazz minds. It’s a role he would play into the 1980s, with final lineups that featured Wynton and Branford Marsalis, and then Terence Blanchard and Donald Harrison.

Bassist Reggie Workman appears for the first time with the Jazz Messengers here, but it’s Walton who takes this album to places — notably on the extended title piece — that the departed Bobby Timmons couldn’t have dreamed. Blakey found a way, even on transitional albums, to improve.

They’re still discovering their true voices, but yet also finding ways to dazzle. “Mosaic,” which preceeded this one in 1961, and the subsequent 1964 album “Free For All,” both on Blue Note, are similar, nearly perfect polyrhythmic gems.

A high-water period for a band that had many.
Posted by Zen Archer at 2:48:00 PM