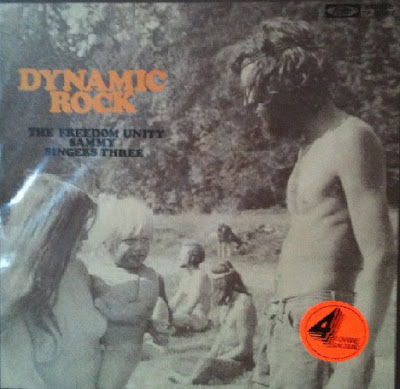 Sammy is the pseudonym of Masami Chino, prolific japanese female rock singer from Soul to Psychedelic rock who was active in the seventies. She sings it well known Jazz, Pop, Rock, Soul, Rhythm & Blues from british and american covers song and jazz standards (her voice tone can be situated between Janis Joplin and Grace Slick). Introduced in the japanese jazz rock scene, she started to work with the legendary Freedom Unity (a jazz quartet formed by Hiromasa Suzuki and Akira Ishikawa) and collaborated with Jiro Inagaki on several albums as Wandering Birds (1971). Later, she also worked with Akira Ishikawa’ Count Buffalo band for Soul & Soul (1972). It’s the second collaboration with The Freedom Unity, after Dynamic Rock (1971), the group is surrounded by a string section plus additional guitarist (Kimio Mizutani) and arranged by Hiromasa Suzuki.

Yet another album of psychedelic-infused cover tunes, that was all the rage in Japan in the early 70s. I found the Chicago covers '25 or 6 to 4’ and 'Free’ to be the highlights here, with tight horn charts and Kimio Mizutani (on what appears to be his 2,000th recording in 1971) doing his best rendition of Terry Kath. On the other hand, the opening track is Creedence Clearwater Revival’s 'Proud Mary’. Oh you haven’t lived until you’ve heard 'Lor-rin…. Lor-rin…. Lorrin on a Liver’.
Overall the album is fun - perhaps fun-ny at times - and worth at least one listen
Posted by Zen Archer at 2:58:00 PM