The Freedom Unity
1971
Down by the Naked City 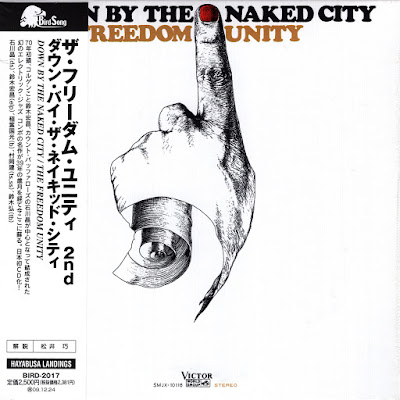 Today, we're beginning with an excellent jazz fusion record from Japan. The Freedom Unity was strung together by Hiromasa Suzuki in the early 70s, and he turned this troupe of Japanese jazz musicians into a flat-out revolutionary supergroup - this is seriously fantastic stuff.
It's some of the earliest fusion to ever surface out of Japan, dating to 1971, and counts for the group's second full-length. Where Hiromasa shines on the electric piano, Kunimitsu Inaba matches with some impeccable basslines that charge the pacing to its full capacity. Drummer Akira Ishikawa pins down the energetic stream with a firm-yet-precise grip, and the horns provide the gleam of light streaming from some of the most energetic jazz I've heard. The first track in particular is an endless astronomic navigation that's both clean and executed. Though it lasts for the length of the A-side, one can't help but thirst for more. Neither quality nor intensity diminish on Side B, leaving me with one question as the album wraps up - where do I find their first album, Something?
In any case, it's splendid early fusion that treads the space of the more avant-garde stuff with an understandable injection of electric Miles Davis influence. This is definitely the kind of fusion that can appeal to both the jazz novice and the jazz connoisseur, and I warmly recommend its entrance into your ears.

Echoes of early Weather Report and Miles from '69 can be heard on the first 20+ minute piece. It starts off really well, but gradually ascends into a more self-indulgent mode of overly long dissonant noodling that's hardly an eye-opening moment. Some of the standards such as the "The Old Castle" appeal to me a bit more and therefore somewhat salvage the album. The "avant-gardisms" of the first track were executed more coherently on Weather Report's albums.
Posted by Zen Archer at 2:37:00 PM