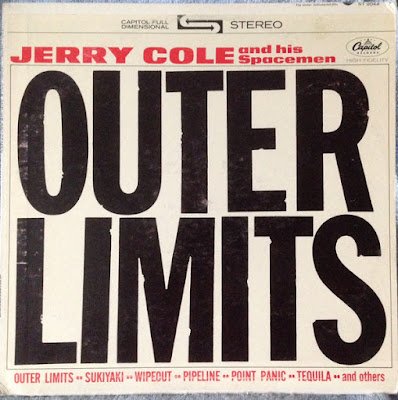 Jerry Cole was a first-call session guitarist in the 1960s who played on a number of Phil Spector's epochal sides and led the pit bands for the rock & roll-oriented TV shows Shindig and Hullabaloo. When he wasn't busy with all that, he cut a number of instrumental rock albums under a variety of assumed names, but Outer Limits features Cole and his band working under his own shingle for a change. Outer Limits is a no-fuss collection of 11 surf-influenced tunes, many of them covers of popular hits of the day, and while Cole's style couldn't be called "revolutionary," there's a lot more muscle in the performances of "Pipeline" and "Wipeout" than on the originals. Cole's discreet use of fuzz and the full-bodied tone he could conjure from his gear give his performances a sound that stands out from others of his ilk, and his originals are strong if basic stuff. If this isn't exactly the Holy Grail for surf fans (and the more passionate might want to spring for Power Surf!: The Best of Jerry Cole & His Spacemen), Outer Limits is still good fun, and anyone who digs classic surf and instrumental sides will get hip to this.

Jerry Cole, supreme studio guitar session man from almost every '60s record you've ever heard, also moonlighted as chief fret-bender with his Spacemen, whose original albums are today revered as surf classics. 1963's Outer Limits, now on compact disc for the first time, rides pounding oceans of reverb, deftly skims by the pier and hits the beach running with not a hair out of place, just in time to frug and watusi alongside a bevy of bikini-clad nubiles. Taken from the stereo master tapes, this bona fide party-starter can now take its rightful place as a cornerstone of the surf legend. For all you Beatles maniacs out there, it features young Billy Preston on Keyboards!
Posted by Zen Archer at 1:09:00 AM