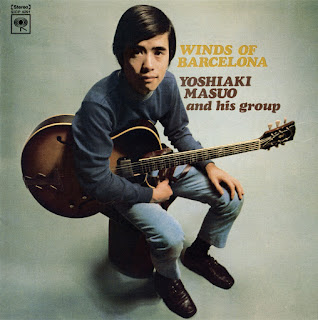 Born in Tokyo, Japan on October 12 1946 as a son of a jazz band leader and pianist, Yoshiaki Masuo grew up surrounded by jazz music, although he never had any formal musical training.

At the age of 15, he started playing the guitar on his own. Prominent among his early influences were Wes Montgomery and Grant Green.

While in Waseda University Jazz Club, Masuo was discovered by alto saxophonist Sadao Watanabe, and joined his group at the end of 1967. Masuo thus started his professional career on top as a regular of Japan's leading jazz group. He was in the group for three years, and experienced tours outside of Japan with Sadao, playing at Montreux and Newport jazz festivals. He was 1970's number one guitarist in the readers' poll of Swing Journal, Japan's most popular jazz magazine. He won the readers poll in the following years even after leaving Japan, five times in total.

Masuo moved to New York City on June 13, 1971. There he played with Teruo Nakamura, Lenny White, Michael Brecker, Chick Korea, drummer Elvin Jones (Masuo took part in the recording of Merry Go Round) . He also played as a regular of Ashford and Simpson. In 1972, he was a member of Lee Konitz's group.

In the spring of 1973, he joined the Sonny Rollins group. He was with Sonny three years the first time and three more years from 1982. He toured with the group all over the United States as well as Japan and Europe. He participated in recordings of four Rollins' albums including The Cutting Edge (of the five, one is released in Japan). One of the albums "Reel Life" contains a composition by Masuo "Sonny side up" being played by Rollins' band.

Between the two periods of his playing with Sonny Rollins, Masuo toured with drummer Elvin Jones in Europe, played with organist Larry Young, and formed his own electric fusion group. He recorded his fourth leader album in 1977 for the newly-established Electric Bird label (King Records of Tokyo). Released the next year as the label's first issue, this album turned out to be a remarkable success. He continued to make fine jazz fusion albums one after another over the following several years, winning new fans. He made tours with his own band in Japan and on the West Coast of the U.S., as well as appearing sometimes in NYC night clubs including Seventh Avenue South and Mikell's. On one tour in Japan, Jan Hammer played with him as a special guest.

After the second period with Sonny Rollins' group in the mid 80s, Masuo acquired his own studio in SoHo in NYC, and there he began experimenting with electronic instruments to create sound all by himself. This took shape as an album titled "Masuo," on which he not only played but also did the roles of composer, arranger, engineer and mixer. This was released in May, 1989. A couple of years before this release, his owning a studio happened to make him get involved as a producer of recordings for JazzCity (and later JazzCity Spirit) for a Japanese record company. He produced dozens of albums over the next ten years. As he got deeply into production, his career as a musician was virtually put on hold.

Debut album in the Montgomery's style from the japanese boss of guitar featuring Kiyoshi Sugimoto, Kazuo Yashiro, Larry Sunaga,  Yoshio Suzuki & Fumio Watanabe from the Takehiro Honda Trio. Influenced by Wes Montgomery and the Grant Green's works, Yoshiaki Masuo has been spotted by saxophonist Sadao Watanabe who launched his professional career in joining up his quartet from 1967. In the late sixties, he was enrolled in the Sharps & Flats by band leader Nobuo Hara and played for pianist Takehiro Honda on his debut album within Sadao Watanabe Quartet. In 1971, he moved to New York where he played for his fellow countryman bassist Teruo Nakamura, prestigious musicians like Lenny White, Michael Brecker, Chick Korea or Elvin Jones, and later in 1973 within the Sonny Rollins group. Titles include pop cover songs by Laura Nyro (Stoned Soul Picnic), Simon & Garfunkel (Scarborough Fair), Bacharach & David  (I Say A Little Prayer, What The World Needs Now Is Love), tribute to Wes Montgomery (One For Wes) and the Sadao's Bossa tune "Gary's Tune".
Posted by Zen Archer at 2:41:00 PM