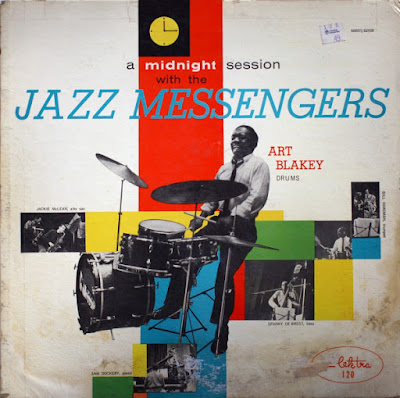 One of the rarest Art Blakey sessions of the late 50s – recorded during that brief time when the Jazz Messengers featured Jackie McLean on alto sax! The set's also unusual in that it's one of the few jazz dates for Elektra Records in the early years – recorded here with an edge that's perhaps a bit rougher than some of the other Blakey records during this "many labels" stretch – but in a way that seems to also bring out some especially great qualities in McLean's horn!

To be honest, I'm infatuated with Jackie McLean at the moment. I heard him on Freddie Redd's "Shades of Redd" with Tina Brooks and was blown away. (I can't figure why McLean is not a household name, in the same breath as Parker and Coltrane. Awesome!) So, after buying every cd I could with McLean's name on it, I started tracking down *anything* he played on. (-Which is a pretty long list) Said titles are disappearing fast, and this is a good one. A 1957 blowing session, this is Blakey just getting rolling with the Messengers. Granted, everyone on this disc would have far superior outings later in their careers, but if you want a killer bop date representing some great players cutting their teeth, pick this up while you still can.
Posted by Zen Archer at 2:10:00 AM