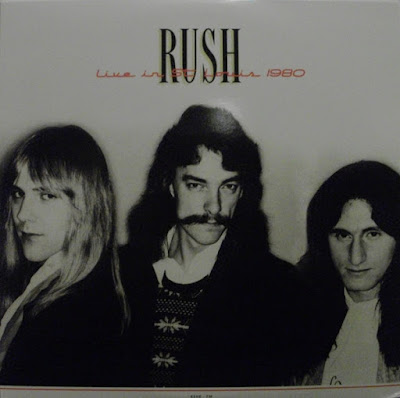 
Tracks rearranged to original running order of the show.

This is a live recording , in the series Historical FM Broadcastings. It captures a Rush gig in the USA, shortly after the release of their Permanent Waves album (early 1980). The recording is at the level of a high quality bootleg and the running time is 73 minutes. The 8-page booklet (I own the CD version) contains an interesting interview in the English rock magazine Sounds (March 1980), Rush telling about their success (Canadian awards and Best Band In The World by UK magazine Sounds) and the change of their musical direction.

The first track 2112 showcases how Rush have matured since All The World's A Stage from 1976. Here Rush sounds more dynamic and adventurous, from the intro with the synthesizer sounds to the final words 'We have assumed control', awesome, this is top notch progressive hardrock. And loaded with sensational wah-wah drenched guitar soli by Alex Lifeson and featuring an outstanding, very fluent rhythm-section. And on the following By-Tor And The Snow Dog the criminally underrated Lifeson delivers one of his exciting soli, with use of the phaser, wah-wah and echo pedal. You can consider the rest of the setlist on this 1980 live CD as a bridge between the progressive hardrock on the live album All The World's A Stage (1976) and the Heavy Prog on the live album Exit Stage Left (1981). From straightforward in Beneath, Between, Behind, Working Man, Anthem, Bastille Day and In The Mood (including Geddy Lee his still a bit 'Micky Mouse on helium' voice) to elaborate and alternating in The Spirit Of Radio, Xanadu, Natural Science and La Villa Strangiato. But there is always that distinctive Rush, with their high quality, huge inspiration and inventive musical ideas. Only the long drum solo by Neil Peart during In The Mood tends to sound a bit embryonal: entertaining but still searching for the perfect balance between time and quality, as he did since the mid-Eighties, nicknamed 'the professor on the drum kit'. The final track La Villa Strangiato emphasizes Rush their new musical direction, into captivating and compelling Heavy Prog, highly recommended!
Posted by Zen Archer at 11:43:00 PM