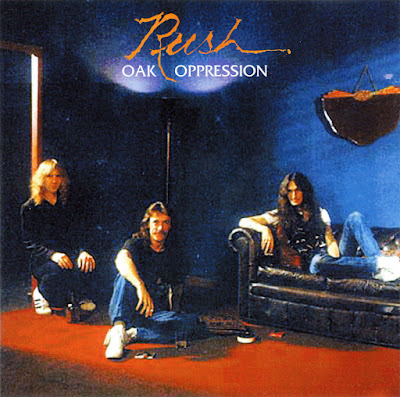 There is a small collective of Rush fans referred to as Digital Reproductions, their task was to locate the best generations of existing live concert tapes and seek out gems hidden in closets or hoarded in trading circles and release them, free of charge by trade, to the fans. Back in 2000 they obtained and released the previously hoarded soundboard from Rush’s concert at Detroit’s Cobo Hall and released it as Buenas Nochas! Motor City. It was an instant hit and would be the source for this amazing release from the kind folks at Gypsy Eye.

Probably the best of the Hemispheres soundboard’s the sound is excellent, well balanced but not without its imperfections The is some tape flutter during the very beginning of Anthem and there is some minor tape fluctuations during the first half of disc 1 and the very beginning of Working Man is missing but other than that we are treated to a full uncut concert in superb sound, this sounds incredible at loud volumes, the audience is very low in the mix but you can feel their presence like the castles in the distance so to speak.

The concert begins with the band warming up over the Wind and Seabirds intro music before the announcers says ” Alright Detroit…lets here it for them…from Toronto Canada…RUSH” and the band lets loose with Anthem. Its a perfect mix of heavy metal fury filled with wonderful time changes, Alex plays a great solo while the rhythm section sounds almost jazzy, Ged also adds some keyboards to the mix. The bands ode to THC is next, A Passage To Bangkok from 2112 is a natural for the live stage. Surprisingly they never played it live back in 1976, the song has a whimsical middle eastern flare to it, of coarse the sound in supplemented by Neil’s use of percussion.

A tale of two monsters is next, By-Tor and The Snow Dog is at this time, a concert staple and is linked with Xanadu in a perfect way. Musically and lyrically they both have some similarities. By-Tor is played with ease and passion, the band have honed it too perfection and have made slight improvements along the way, again Geddy’s keyboard blend perfectly with the Of The Battle section that segues into Xanadu all sounding very mystical. 12 minutes of musical perfection is Xanadu, Ged uses the Taurus pedals to lay a deep low foundation complimented by the moog synthesizer augmented by Neil’s uses of, well everything. Defiantly one of the bands master works of their progressive era and honed to live perfection from the last tour the band are in extreme synchronicity, Alex plays on of my favorite solos, not filled with a multitude of notes he plays a sparse melodic solo to emphasize the mood they created, the although the audience is in the distance they certainly roar their approval.

Something For Nothing has been a stage favorite since its debut in 1976 but it having its last gasp during this tour, it has a poignant lyric but musically does sound slightly out of place among the more complex material the band was creating. So confident in their musical direction the band would play the entire Hemispheres record early in the tour, the first of these songs is The Trees. A lyrical tale of a forest argument the light felt song features some of Geddy’s best bass playing, just listen as he works his fret board ! Great and inspired playing from all, the tale is brought to close with hatchet, axe, and sword. The final stains of the song gives way to the epic space adventure of Cygnus X-1, the song would become the first book and be concluded during the next song, book II. After Terry Browns spoken word introduction Ged starts the music off with his Rickenbacher bass the swirling epic is incredible, again the focus of the three musically is incredible as they head northwest to Pegasus. They bring the story alive with the complex blend of virtuosity from their broad range of instrumentation and the voyage ultimately takes you into the black hole, a spiral sea un ending. The song fades out and cuts back in as Geddy introduces the title track, Hemipheres. The song is an 18 minute musical epic of the mind, extremely complex both musically and lyrically and completely created in the studio, the song would eventually make the band strive for shorter compositions and was the last of their side long epics. The song is broken into six parts, and based upon mans theological discoveries of what is ultimately in ones mind. While writing this review I pulled out my copy and read along withe the lyrics, it gives you a scale on how massive this song is. Geddy spoke about the difficulty he had with the piece and how he struggled with being able to sings the complexity of the words Neil had written, one can easily see why. Musically the song is diverse but a theme runs through it with Armageddon and Cygnus Bringer being the trippy parts, one can almost hear a little of the Grateful Dead’s Dark Star during the latter. The Sphere ends the piece, filled with a more logical view of ones self and musically very light in nature. One song ends, another rises from its ashes and will give the final epilogue in the form of Closer To The Heart. The crowd, although distant sounding, give a huge roar for the song as it already a live favorite. Filled with promise and hope and providing humanity the hope that if all work for the better of all we will ultimately triumph. Neil’s drumming is great during this track, he punctuates the song without over powering it.

The second disc starts with the shortest song in the set, after the epic first half the song gets your head banging. The song has an incredible riff that harkens back to the bands early, Led Zeppelin Jr approach but has a great middle section that breaks it up a little. The song would be performed primarily during the first part of the tour and we are lucky to have a few excellent recordings to enjoy (Tucson 78 is another). The title track from A Farewell To Kings follows, again an upbeat rocker with Alex’s acoustic introduction augmented by Geddy’s keyboards. I love Alex’s solo on this song, sound likes he just joins in with the others then proceeds to tear it up before the band hammers it out.

Musicianship is a cornerstone for Rush, surprisingly they have very few instrumentals, in this reviewers opinion the top of the heap is La Villa Strangiato. The band were obsessed with the song and tried to record it all in one take, due to the complexity of the song and the bands strive fore musical perfection it was ultimately done in three parts. Live they have a little more latitude and live versions of the song are incredible.

One of the bonuses from the Beyond The Lighted Stage documentary is a live performance of this song from the end of the tour at the Pinkpop festival in Holland. It is incredible to watch Alex play this song, a guitar players masterpiece as he is firmly in the drivers seat. The way he builds the solo is incredible (pause to play air guitar), the synergy among the group is unparallel. No lyrics ? don’t need them, the music is doing the talking.

The main set is brought to a close with 2112, one would think that there would be weariness creeping into the performance, this is Rush and they are super human and can keep the pace. The song features the Discovery section in wonderful quality, the sounds of a waterfall accent the music discovery and the creation of music, the section exudes pure, unadulterated joy brought to life via Alex Lifeson. His guitar has a great tone, just a slight bit of distortion and the band soar through Presentation. Neil plays effortlessly, his fills are out of this world, Ged uses some echo on his voice to great effect. Alex plays a great solo, one of my favorites, he uses his wah peddle to get the swirling sound that is used throughout the song. The band lets it all out during Grand Finale, Ged is playing the hell out of his bass as they proceed to hammer the hell out of the main riff before Alex explodes amid a flurry of leads and the Solar Federation taking control.

There is a tape cut after the songs conclusion and Geddy thanking the Motor City. Working Man is cut and the first couple minutes or so is missing, the song picking up as Alex is playing a solo. As usual the song is a vehicle for a medley of older songs, after Alex plays a solo with Ged getting on him with his bass and ultimately goes note for note with him and Alex launches into the rabid riff of Bastille Day. Being encore time the band just goes for it and the song is fast and aggressive and the band goes right into In The Mood from the first record. A live favorite it features Alex doing the back up vocals and of course the “Lovely Professor on the drum kit”, aka Neil’s solo.

The packaging is simple, full color inserts with posed and live shots and some album cover graphics all packaged in a slim line jewel case. Again Gypsy Eye do a good job with this release, they leave the tape alone and offer it up in a nice package. This title can still be found and is a highly recommended title to not only Rush fans, but fans of progressive music would most certainly appreciate music of this caliber.
Posted by Zen Archer at 4:49:00 AM