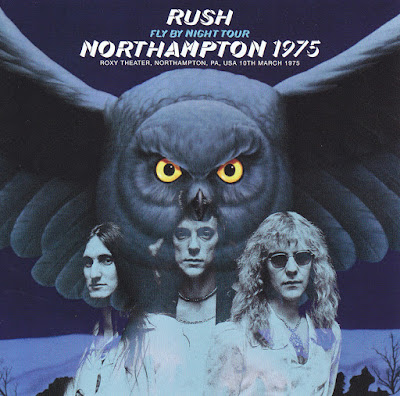 Feeling devastated by the news of the passing of Neil Peart of Rush, not only one of the best rock drummers ever, also one of it's best lyricists, and probably one of the most cultured musicians ever. And responsible for me, while still living in Communist Cuba, discovering The Fountainhead by Ayn Rand and forever changing my view of the world and firmly awakening my thirst for personal freedom. For that, and putting the idea of Free Will in my mind, dear Neil I will be forever grateful.

In December 2018 Rush fans got an early present as an unknown soundboard of the band’s performance at the famous Roxy Theater in Northampton, PA on March 11, 1975 surfaced and was first shared on youtube and finally to collectors via good ol’ torrent sites. The recording was done by AM radio station WSAN in nearby Allentown, PA and it is from there that our story begins: “The only date record we have is the label on the reel to reel (and the words of the guy who recorded/found it). Neil, the radio station engineer who discovered this, said Rush had an opener named Slim Pickens and they kept the sets shorter at The Roxy to appease the townspeople with the noise and tomfoolery. How much of this is fact is lost in the 43+ years between now and then…at least as far as combing the Internet showed me…There doesn’t appear to be any historical archive of The Roxy and it’s earlier days of musical glory anywhere. So the tape said March 10, 1975 and that’s all I can say…”

So the original date was March 10, 1975 yet once posted on aforementioned torrent site, more information surfaced from someone who was there, user named Blackchevy who had this to say: “Thanks for sharing the flac version. OK, I WAS AT THIS SHOW. The date is March 11th. On the 10th, we were all in our seats waiting for the show to start when an announcement was made that the band’s van broke down on the trip down from Canada. With all their equipment in the van the band were unable to perform that night so we were told to come back tomorrow (the 11th). For those who doubt my story. Listen to what Geddy says on the intro to “Anthem”. He says, “Sorry about yesterday, seems like everyone was against us yesterday”. He was of course referring to the incident I just described. Now I found out that a Budgie show from the Roxy has survived on two reel tapes. Radio station WSAN sponsored these shows. There were always TWO shows since the Roxy only held 300 people. There was a 6:30 show and a 9:30 show. This recording is the 6:30 show. How do I know? Because Geddy, in introducing the song “Bad Boy” (a Beatles cover) asked the audience if anyone had the Beatles LP the song was on. I was the only person (unbelievable) who raised their hand. Geddy saw it and said, “Only one?” The short set was due to the fact that Slim Pickens played for about a half hour (til 7:00). Took about a half hour to take their equipment off & set up Rush’s gear. So they played from 7:30 to 8:30. Now remember, there was a show at 9:30 so they had to get everyone out to let the 9:30 crowd in who were already lined up outside waiting to get in. AGAIN, I WAS THERE. This is how it went down. Believe it or not.” So the date is confirmed as being from March 11, 1975.

This is a significant find for Rush collectors for good reason, save for live dates in support of their first record, recordings from the Fly By Night, Caress of Steel, and 2112 tours are few in numbers so any new recording is much welcomed. Speaking of the Fly By Night tour, there are two previous recordings that circulate. The Agora Ballroom in Cleveland, Ohio date on May 15, 1975 was recorded by WMMS and only broadcast tapes circulate, most have a decent layer of hiss and lack dynamics, this recording was pressed years back as Can’t Fight It (Gypsy Eye GE-122). The second is an audience recording from the famous Massey Hall in Toronto, Canada on June 25, 1975, the quality is very good and was pressed on Live Anthem 1975 (Gypsy Eye GE-085).

The recording here is obviously a pre-broadcast tape and is of excellent quality, well balanced albeit a little raw sounding with just a very minor bit of hiss. This recording easily compares with the Cleveland and Electric Lady recordings from 1974 and is easily the best of 1975, when you put this in your player, turn it up as it sounds great at loud volume. The recording begins with the band taking the stage and checking their instruments, the introduction goes like this, “From Toronto Canada, let’s have a warm warm welcome for Mercury recording artists…RUSH” and the band break into Finding My Way. The song from their debut would be the opener for both Rush and Fly By Night tours and for good reason, great opening riff and always a song that gets the hands in the air. The confidence in Neil’s playing of the older material is incredible, he does not over do it yet interjects lots of cool fills and a tightness not previously heard on the studio version. His drumming is key to Best I Can, another of the older Rutsy era songs, one that did not make the debut and thankfully wound up on Fly By Night. Not a complex song structure wise but Peart’s playing makes it sound that way, it’s the drums that really make this one.

The heavy What You’re Doing gets third spot, monster fat riff that sounds recycled from Led Zeppelin II, always been a favorite of mine, Alex just soars on this song, his solo has great support from Geddy and Neil that seem to accentuate all the right spots. What is interesting is that you can hear some electronic effects even at this stage, between a pause break before the finale of What You’re Doing you hear something that sounds like a swirling effect, the band are expanding their musical offering. Gedd speaks on the “incident” prior to Anthem and tells the crowd they are going to play some new tunes, Anthem being the first. Now when one compared the first three songs to this, wow what a change. The first thirty seconds are like a battle cry of the groups more Progressive music style. Full of energy and vigor, the complex musical changes coupled with raw Rock sensibilities with a lyric about self interest make for one of the most compelling early Rush songs, one that would be a stage favorite.

The third new track is the early Prog epic By Tor and The Snow Dog, “A long number, a fantasy I guess about two creatures that uh didn’t get along very well” is Geddy’s intro and we get a quick Neil count in and the song hits like a freight train. Clocking in at just over ten minutes, the clarity of this recording lets the listening really get an idea on the songs dynamics. Geddy’s distorted bass notes are like ying to Alex’s clean guitar yang during the Battle sequence, the perfect precision of the battles end into Aftermath feature a reflective Lifeson and Neil adding lots of little percussive chimes all culminating into the massive drum roll and the brilliant guitar solo of Hymn of Triumph leads to Epilogue, an adventurous journey. Rush’s cover of The Beatles’ Bad Boy had been a regular in the set list for much of the Rush tour, this is the only known version from 1975 as the song would be cast aside for newer Fly By Night material. Alex just rings the hell out this song and the band give it almost a bluesy edge, the high speed ending is intense and leads into an Alex guitar solo that is one of the highlights of this recording. He starts with a flurry of leads before settling down into a trippy effects laded trip that reminds me of Brian May’s solo in Brighton Rock on acid! Neil enters the fray towards the end with a few percussive elements as well, Rush would work on new material and ideas on the road, soundcheck etc, one gets the feeling that this was a work in progress.

Working Man is the culmination of the band’s set, still the show stopper as it allows every band member to get some individual solo acclaim. Geddy really gets some tasty bass licks in and of course Alex is all over the place, solo on top of solo as the band just do some improvisational jamming that is very nice. The song is also the vehicle for the brilliant, early Neil Peart solo, he had his work cut out for him on these early tours, small kits, not as much of his chimes, bells, percussion items as on future tours, this is pure unadulterated drum finesse and power. In The Mood has been an encore stalwart since the early days, once the serious music is finished its time to Rock and Roll and this certainly fits the bill. Need Some Love is the final song of the set, primal Rush at its best!

Cygnus’ packaging is full color inserts and picture CD packaged in a slim lined jewel case, this release uses the Fly By Night cover and superimposes a picture of the band in the foreground and is visually very nice. The pictures the label uses show a young band on the verge of breaking into the big time. Great to see this recording get a release as it certainly deserves one, would be great to see Cygnus release more as they always put out nice product.
Posted by Zen Archer at 3:14:00 AM