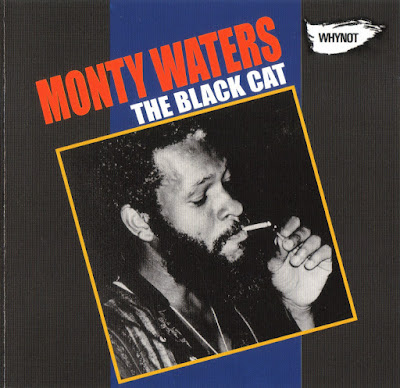 I first heard alto saxist Monty Waters on the Joe lee Wilson and Bond Street album, What Would It be Without You. I love Joe Lee Wilson (and have blogged about his music) and liked what I heard of Waters, but I could never find much music by him. It turns out that he spent  a good many years of his later career in Munich, where he did record, but he never got much of a shot in the U.S. Like many practitioners of America’s greatest gift to world culture, he’s been neglected in his own country. Fortunately, he was recorded in 1975 by the Japanese WhyNot label, now re-released on CD by Candid Records.

Monnville Charles (Monty) Waters was born in Modesto, California on April 14th 1938 and passed away in Munich on December 22nd 2008. Another of Jazz's unsung heroes, his death went virtually unnoticed by the international jazz community, as indeed had most of his career. The saxophonist didn't even rate a mention in the All Music Guide To Jazz and most of the standard reference books. This is indeed regrettable as Monty was clearly an artist of consummate talent in both his playing and writing ability. Monty studied music at Modesto High and cut his teeth in the vibrant R&B scene in the late 50's touring with the bands of B.B King, Little Richard, James Brown and others before switching coasts to play in New York with the likes of Woody Shaw, Jaki Byard, Elvin Jones and Art Blakey where he gradually became involved in the emerging 'Loft Scene.' Monty and his associates on Black Cat all display considerable skill and panache and achieve a remarkable empathy on all of Monty's six original tunes. Throughout the set guitarist Yoshiaki Masuo, bassist Ronnie Boykins and drummer George Avaloz achieve a rare intimacy as they weave in and out of the proceedings to startling effect. Waters' very personal alto is airy, floating and fluid. His playing has a plaintive bluesy quality which just grows on you. His swinging, narrative style has been described as "being likely to outlast all that intellectual blasting of notes - 'emotionalism' without emotion...."

The Black Cat is an excellent date, featuring Waters, guitarist Yoshihaki Masuo, bassist Ronnie Boykins, and drummer George Avaloz. Waters also composed all of the tunes. They’re really equal partners here, notably on J. Love March, a slightly eccentric jazz march with a good deal of collective improvisation. Waters has a lot of Ornette Coleman in his playing, particularly notable on the two blues tracks—Bog’s Blues and Modesto—but tempered with a more disciplined Steve Lacy-like tone.  It’s a strong combination. Apt. #2H, a reworking of Giant Steps, the title track, and R.P.M. all serve as vehicles for Waters, an impressively melodic Masuo, and standout solo work by Boykins.
Posted by Zen Archer at 12:40:00 AM