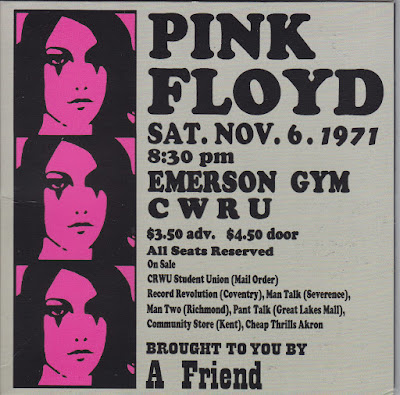 Pink Floyd’s tour of North America in the late fall 1971 would spawn many fine audience recordings with the San Diego recording being the best, but coming in a close second would have to be the recording from Cleveland. This new release from the Eat A Peach label features a new version of the tape, boasting better sound and a slightly longer running time and speed corrected. First off the source recording is very good near excellent, the only thing keeping from a full excellent mark is at times the lower frequencies dominate making for some distortion. The taper would pause his recorder between songs but actually did a decent job but the only thing that is annoying is the constant comments of people near the recorder that do get a bit annoying, but after one puts on the first song and the concert begins you are soon sucked into a brilliant and highly enjoyable performance.

This show began making the rounds in the collectors market with the release Cleveland 1971 (Anayami 174), a CD-R title that was followed by an early Sigma release Acute Danger (Sigma 9), and now this new title from Eat A Peach. After this release Sigma would release their upgraded version as Cleveland 1971 (Sigma 136). Since I only have Acute Danger that is what we will use to evaluate this new title. The Acute Danger title is just a bit louder than this new release but has more of the low end distortion, please follow the link to read Gerard’s excellent assessment of that title. This new Eat A Peach title’s sound is a tad lower and while the low frequencies are still strong does not distort near as much as the older Sigma title, the sound is also much warmer and sounds like it has a much wider frequency range that makes for a really enjoyable listening experience. The speed adjustment is very slight, just a hair faster and the edits are smoother, after listening to this version repeatedly on my home and car stereo I really enjoy this version of the tape and cannot find a flaw, yet not having heard the newer Sigma version of the tape cannot say if this is definitive but most certainly an improvement in sound over the old releases.

The synergy between the musicians is unmatched, their focus does not wander and set highlights are most certainly the mind bending Set The Controls For The Heart Of The Sun, a bluesy 18 minute version of Atom Heart Mother, and a brilliant Cymbaline where you really get a feel for what it must have been like to hear the footsteps in person based upon the comments from the obviously stoned group around the tape machine. Roger’s screams during Eugene sound like some distant storm sirens and Gilmour does some interesting jamming during the latter part of the song.

The packaging is mini LP sleeve with the cover based upon concert poster art, as do the pictures on the CDs themselves. The CD sleeves feature live shots of the band from the era and there is an insert with liner notes from the impeccable Lazy Goalkeeper. This is an excellent release, after not really hearing this concert for some time, what a great way to rediscover it as 1971 was a superb year for the band, whose fortunes would change within a few short months as the next year would bring in a new musical direction.
Posted by Zen Archer at 11:50:00 PM 1 comment: Links to this post 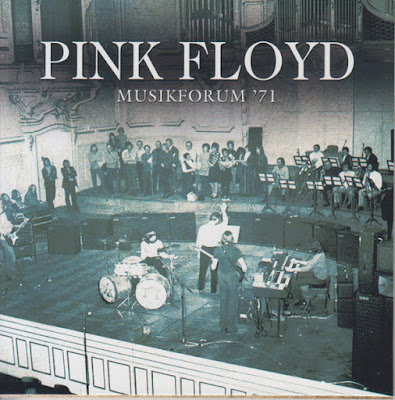 
Ossiach is a small community located on the southern shore of Lake Ossiach and nestled in the Nock Mountains. When I did a basic internet search the pictures that populated where filled with beautiful picturesque settings, tranquil and peaceful. The small town has hosted a summer music festival for some time, with a focus on classical and jazz orchestras, a perfect setting for the lush and expansive music of Pink Floyd.

Pink Floyd’s performance there in the summer of 1971 was unique as “pop” groups were not asked to perform, this festival was different as not only the Floyd played but the electronic music pioneers Tangerine Dream were also in the line up. That some enterprising young fan traveled down to see and record the Pink Floyd is something I find quite interesting, Germany and Austria had been very good to the band throughout their early growth years and we own a huge thanks to the fans that provided so many wonderful recordings.

The recording itself is an audience source, the quality is very good, a bit distant yet clear and atmospheric yet does have noticeable hiss. The recording has seen a few prior releases, Nothing Parts 1 to 24 (Highland HL-609/610) came out 15 years ago and more recently Ossiach Festival 1971 (Sigma 83) was released with improved sound quality. I pulled my copy of the Sigma title out and gave it a spin. I find that this new title from Peach is very similar to the Sigma title, if anything it is slightly louder and maybe just a tiny bit clearer although with louder volume comes increases in the hiss level. The festival was broadcast on Austrian radio as well as coverage on the Bayerischer Rundfunk TV channel but it is unknown if either contained the Floyd. A triple LP of the festival, Ossiach Live (BASF4921119-3) was released later in the year but Pink Floyd did not appear due to contractual reasons.

Since it was a festival and keeping in the spirit, the band would only perform a 90 minute set made up of their more long form pieces. Another thing you can expect is lengthy tune ups, a norm for this period. The band takes the stage and tune up and finally Roger introduces the first song, The Return Of The Son Of Nothing, soon to become known as Echoes. It has the early lyrics of planets meeting face to face and all that Space Rock dribble. You get a feel for the acoustics of the venue by listening to Mason’s drums, you can hear them crisp and a bit hollow sounding in the small theatre. The stage is small and the band were pushed forward a bit to accommodate the Brass and Choir ensemble that would accompany the group during Atom Heart Mother. The funky section of The Return Of The Son Of Nothing is nice, the seabird and Richard Wright’s soundscape is really good as well.

The audience, although a bit chatty, are familiar with the Floyd’s repertoire and give Careful With That Axe, Eugene a nice ovation, the version is straight forward and typical for 1971. Set The Controls For The Heart Of The Sun is very expansive, the synergy between musicians is perfect with a very focused performance of the piece, again with Gilmour’s fiery guitar and Wright’s incredible array of keyboards all put to good use.

The weight of the performance falls upon Atom Heart Mother, this is a somewhat rare version as it features a Brass and Choir accompaniment. What is unique to this new release is what is refereed to as a different source, that is a bit of a misnomer. It is the same recording just a different generation of tape. One only needs to listen to the audience sounds as they are exactly the same. The sound is clean of hiss but is flat sounding and lacks the dynamics of the rest of the tape, yet does not sound like noise reduction. This concert is known for the performance of Atom Heart Mother, the brass is nicely placed in the live mix and is one of the better versions of the song.

The packaging is a mini LP sleeve that features pictures from the event on the cover and CD sleeves that ties the set together nicely. The insert has no liner notes but instead has a listing of all known 1971 concert dates. The CD’s are adorned with a take on the Harvest LP labels, very cool. Another attractive Pink Floyd set by Eat A Peach. 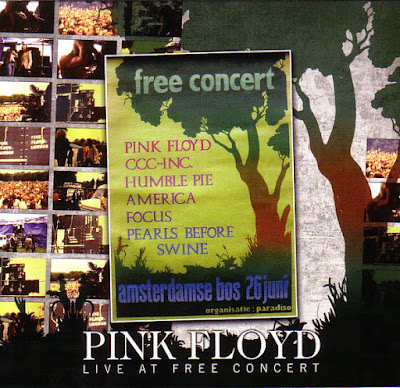 While Pink Floyd took an enormous step between Atom Heart Mother and Meddle, it was the older material that were the basis of their live show during 1971.  In June they played dates around Europe and most of the shows include their newest epic “Return Of The Sons Of Nothing.”  On June 26th they played the Free Concert festival in Amsterdam.

Almost a year to the day since their last festival appearance in the Netherlands (the famous Stamping Ground show in Rotterdam), they played a shorter set devoid of any new material.  The “newest” song performed is “Cymbaline” recorded in 1969.

Three tapes exist for this show.  The first to surface is very good to excellent but is cut between the songs.  It was used to source several vinyl releases including  Early Tours ’70-’71 (Space Records FET 771 A/B), Barrett’s Revenge (TKRWM 2820-A/D), Amsterdam ’71, Sysyphus (S-1001) with “Careful With That Axe, Eugene” from this show, and Pink Floyd (Angry Taxman Records ATR 003-S1001).

The second tape to surface is also very good and clear which includes all of the tuning and introductions.  It was used for At Free Concert 1971 (Ayanami-190) on professional CDR and is also utilized by Godfather for Live At Free Concert.  Godfather’s mastering is much superior to  Ayanami, sounding louder, clearer and much more enjoyable enjoyable.  It is a tremendous mastering job which deserves definitive status.

(A third tape surfaced several years ago in excellent quality.  It’s superior to these two but only had “Careful With That Axe, Eugene” and “The Embryo.”)

Pink Floyd headlined this event.  The tape begins with the words of the mc welcoming them to the stage saying: “with enormous difficulty but with great joy we bring you the Pink Floyd.”  It is a hurried yet extremely intense performance.  (After the performance the mc mentioned Floyd having to catch a plane).

Even though they play neither of their two epics “Atom Heart Mother” or “Echoes,” the numbers included are improvised greatly and have interesting performances.  “Careful With That Axe, Eugene” is very quiet and mellow until the scream.  Waters is loud enough to cause distortion in the sound system as the noise shakes the stage.

“Cymbaline” retains its melodic beauty.  The middle tape section entertains the audience, not with footsteps and a slammed door, but with the sound of a woman in orgiastic passion (to the surprise and amusement of the audience).

After a twelve minute version of “Set The Controls For The Heart Of The Sun” there is a five minute long delay as they fix the equipment.  The set closes with a lengthy version of “The Embryo.”  It is a rare instance where this song closes a show.  By this time in the song’s performance history Gilmour would play the seabirds from “Echoes” in the middle.  Also in this performance Waters duplicates the Scottish rant from “Several Species of Small Furry Animals Gathered Together in a Cave and Grooving With a Pict” from Ummagumma.

At the end the audience is begging for more as the mc thanks Pink Floyd, the crew, and all the other bands for participating in the event.  He also asks the audience to, as they are leaving, to take their trash with them.

Since Godfather began releasing Pink Floyd titles several years ago they’ve released several excellent titles.  Live At Free Concert stands above the others for its relevance (there are no other silver pressings of this show available), completeness, and mastering of the tape.  It’s much better than anyone should expect and is a title definitely worth having.
Posted by Zen Archer at 10:20:00 PM 1 comment: Links to this post