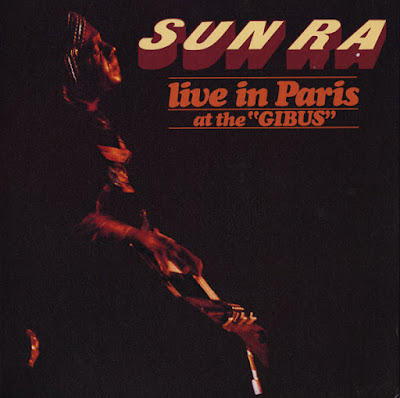 Sun Ra (organ/electric vibraphone/space instruments/synthesizer/vocals) and his Intergalactic Space Research Arkestra are captured live in October of 1973 on this essential disc. Not only are the sides uniformly inspired, but the track list bears a few interesting diversions, including seminal examples of Ra as both a performer and unequaled arranger. The mid-tempo dreamy and languid opener, "Spontaneous Simplicity," evolves around Ra's sublime organ and electric vibe runs. He places those against an unforced and otherwise limber wash of hand percussion as well as the understated yet solid pulse of Ronnie Boykins' bass. Ra's emphatic electric organ inflections herald the introduction to what is arguably the most haunting and poignant reading of "Lights on a Satellite" readily available. The flute section -- featuring Marshall Allen (alto sax/oboe/flute/piccolo), Danny Davis (alto sax/flute/alto clarinet), Danny Ray Thompson (baritone sax/flute), James Jacson (bassoon/flute/percussion), and Eloe Omoe (bass clarinet/flute) -- reel an edgy and trance-inducing melody into their sinuous lines. The entire affair simmers just below some glistens from Ra and a sax solo by John Gilmore (tenor sax/percussion). "Ombre Monde" (aka "Shadow World") dates back to the mid-'60s and allows Allen a platform for an extended lead that is sonically spurred on by Ra's motivated electric piano. Akh Tal Ebah's trumpet aggressions also make this version stand out. The truly phenomenal cover of Jelly Roll Morton's "King Porter Stomp" is a progressive score that builds on work done by Fletcher Henderson's definitive version. The Arkestra's compact presentation is stunning and Ra's complex score makes this flawless rendering all the more improbable. The bandleader offers up a vocal cosmic greeting on "Salutations From the Universe" which is swirled in an onslaught from the full ensemble. Ra's forceful keyboards are countered by some sharp and incisive contributions from the Arkestra. This segues into the benedictory "Calling Planet Earth" chant that is free jazz madness at its most effective. June Tyson's (vocals) voice can be picked out among the participants before Ra's brief solo conclusion. Although initially only pressed as a hard-to-find French import, Live in Paris at the Gibus was issued on CD in 2003 and is a highly recommended title for inclined parties.
Posted by Zen Archer at 11:49:00 PM 2 comments: 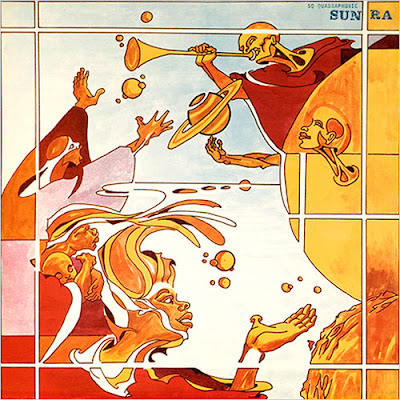 Discipline 27-II was recorded in 1972, a product of the same sessions that would yield Sun Ra's legendary Space Is the Place LP. The recordings took place October 19–20 at Streeterville Studios, Chicago, featuring the largest Arkestra line-up Ra had taken into a studio. The date was produced by Impulse! and Riverside veteran Ed Michel.

There have been several atrocious-sounding bootleg editions on the market, but this 2017 fully authorized remaster reveals the rich clarity of these sessions. This edition was remastered for Strut Records by Peter Beckmann from the original master tapes in the Sun Ra Music Archive, under license from Sun Ra LLC.

On the original 1972 Saturn version released by Sun Ra, the 24-minute title track was inexplicably divided into four separate tracks at arbitrary points, thus interrupting the flow of the work. On this remastered edition, the title track has been restored to its proper length without interruption.

A CD edition was issued in October 2017 by Corbett vs. Dempsey Records. 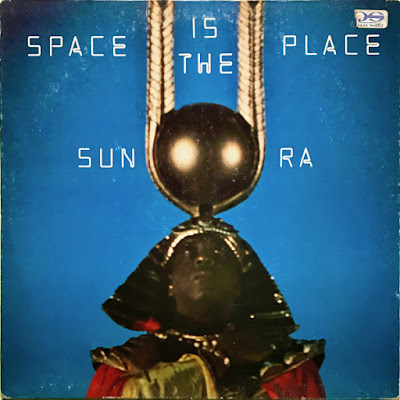 Diferent recording that the soundtrack of the film "Space is the Place".

Space Is the Place provides an excellent introduction to Sun Ra's vast and free-form jazz catalog. Typical of many Sun Ra recordings, the program is varied; earthbound songs, like the swing number "Images" and Egyptian exotica piece "Discipline," fit right in with more space-age cuts, like the tumultuous "Sea of Sounds" and the humorous "Rocket Number Nine." Sun Ra fuses many of these styles on the sprawling title cut, as interlocking harmonies, African percussion, manic synthesizer lines, and joyous ensemble blowing all jell into some sort of church revival of the cosmos. Throughout the recording, Sun Ra displays his typically wide-ranging talents on space organ and piano, reed players John Gilmore and Marshall Allen contribute incisive and intense solos, and June Tyson masterfully leads the Space Ethnic Voices on dreamy vocal flights. This is a fine recording and a must for Sun Ra fans.
Posted by Zen Archer at 11:33:00 PM 1 comment: 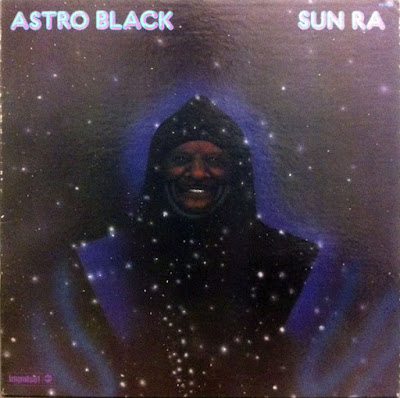 All titles composed by Sun Ra

After years of self-releasing albums on his own Saturn label, Sun Ra signed with ABC's Impulse jazz imprint in 1972. A reissue series of earlier hard-to-find Saturn LPs was undertaken, along with a few new projects. The first premiere, Astro Black, was recorded and released in 1973 in the now-obsolete quadraphonic format (tho it was playable on stereo phonographs). The undertaking signaled a noble campaign on the part of Impulse producer Ed Michel to mainstream Sun Ra and broaden his audience, without any sacrifice of artistic integrity.

But the effort was doomed: the label suffered commercial losses on the project and lost faith in avant-garde space funk. Within two years, after corporate reshuffling (i.e., firings and hirings), ABC's Sun Ra project was abandoned. The company clipped the corners of the cardboard sleeves and dumped the lavishly illustrated gatefold LPs in record store discount bins (or as some disgruntled fans claimed, UNDER the bins). Yet the Sisyphean venture produced some worthwhile new music.

Astro Black was a return to quasi-accessibility, away (though not completely) from the anti-jazz experimentalism of the late 1960s, and toward synthesizer-driven space jams. The Arkestra's horn skronk was still prominent, but on side one of Astro Black it was largely anchored by the propulsive rhythm section of returning bassist Ronnie Boykins and drummer Tommy Hunter (along with a battalion of African percussion). With Sun Ra perched behind his Minimoog, this is very much a 1970s album. But as any listener will attest, it's also very much a Sun Ra album.

On the 11-minute title track, vocalist June Tyson croons a siren song above bassist Boykins' snaking groove. About 3-1/2 minutes in, the Arkestra achieves liftoff, after which they explore some free interplay the rest of the way.

"Discipline 99" is a loose, relaxed space walk with some fine ensemble work by the horns. The "Discipline" series, variously numbered and composed by Ra during the 1970s, were generally group-performed works which omitted solos; this recording is an exception, showcasing expressive offerings by John Gilmore (tenor sax), Akh Tal Ebah (trumpet), and the bandleader (electro-vibraphone). The percussion-heavy "Hidden Spheres" serves up some steamy African exotica, with Marshall Allen (alto sax), Kwame Hadi (trumpet), and Eloe Omoe (bass clarinet) intensifying the mood.

Side B of the LP (here track 4) consists of "The Cosmo-Fire," a sprawling 18-minute otherworldly affair of conducted Afro-futuristic improvisation unified by Boykins' inventive bass and punctuated by Sunny's synth and organ. The work provides an uncompromising contrast to the album's A-side, and proved that despite the major label upgrade, Sun Ra was intent on challenging his listeners.

There's a short chronicle of Ra's Impulse adventures in "The House That Trane Built: The Story of Impulse! Records," by Ashley Kahn. The book includes the following amusing anecdote by Ed Michel, in which he recalls his first Sun Ra mixing session in 1972: "I liked to mix at the pain threshold. It was really loud. We were mixing it quadraphonically in a relatively small room. Sun Ra was sleeping deep and snoring loud. For some reason, I stopped the tape in the middle of the tune. He came awake, wheeled his head like an owl does—all around the room, checking everything out. He said, 'You Earth people sleep too much.' He put his head down and started to snore again."
Posted by Zen Archer at 10:53:00 PM 1 comment: