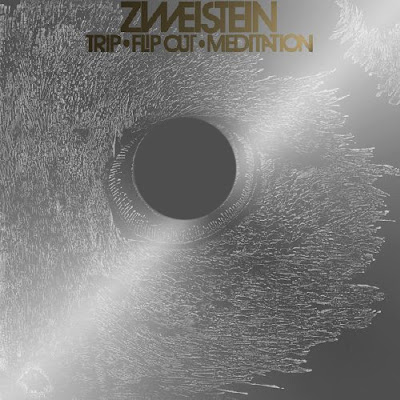 
A pack of drug and art addled young Germans run amok in a recording studio on a major label’s dime Even better, a pair of sisters, one of them a popular mainstream singing star, travel around Europe making weird tapes on a portable tape recorder and then lavishly package the treated results as a triple LP set in an elaborate and expensive silver and gold foil sleeve circa 1970 in Germany? I’m so there.

The cons: Avant-garde nonsense made by a German pop star and her sister using a portable recorder, later effected/processed by an excellent producer/technician who also worked with Amon Düül II and Hawkwind.

The pros: Same as the cons.

Basically, if you like avant-garde music that has an element of pure fun to it, this is essential. Get on it if that's your bag. If it isn't, no harm no foul, it's very much for specialized tastes.

Originally released on Philips in 1970, Zweistein’s trippy kraut psych experimental masterpiece gets its first vinyl reissue ever. Even more experimental than Faust, Kraftwerk or Cluster, their only album was a triple LP housed in a marvelous double gatefold cover, all made in silver & gold cardboard, with the front embossed and featuring a small mirror on it. Electronically adventurous, the sounds give you what’s promised in the title in the form of an avantgarde collage produced by Suzanne Doucet -a successful pop singer and TV guest then, and now a famous voice in New Age music- with the help of her sister Diane and sound engineer Peter Kramper, who besides his recognised work as a studio wizard starting with many German beat bands like The Rattles or The Blizzards and later remixing albums by the likes of Hawkwind a.o. He also played synthesizer in some Amon Düül albums an records by other krautrock travellers like Utopia’s 1973’s self titled LP.

At the time Suzanne didn’t want to link the avantgarde experiments collected here with her succesful pop career, so she used a pseudonym and signed the production as Jacques Dorian, while the recordings were issued as being made by a whole band named Zweistein. The photo you see on the cover of their only 45, here included as a bonus, show the Doucet sisters surrounded by friends who where ask to play any instrument they could, be a tambourine, a flute or simply stomp their feet on the ground, on the sessions.

“My sister and myself were huge fans of Einstein (of course) therefore the ZWEISTEIN pseudonym.”

“I was always into recording technology – starting when I was 14 to record songs with my first tape recorder… so I took all the recordings of ZWEISTEIN and transferred and edited them into a “piece” and it became 3 album length pieces. We took those to the studio to my favorite recording engineer Peter Kramper (who was also a producer and recording engineer for Liberty Records, I was signed to until 1970) and added effects and magically appearing sounds that came out of nowhere (you can hear those strange tones on the 3rd album in the beginning and end…) and they did fit perfectly with our 3rd album MEDITATION.”

“The 3 albums were called TRIP, FLIP OUT and MEDITATION because that was in our opinion the logical evolution our generation was going through. We all had experimented with psychadelics and the first album is such a recorded TRIP. As a result many of us went into a psychotic state of mind, i.e. FLIP OUT (the world upside down, reverse all concepts and rules were off) and if you ever came out of that your only salvation would be spirituality MEDITATION. Maybe ZWEISTEIN became such a “cult” recording because it reflected the evolution of the mind of a whole generation. And if we accomplished that I would call that art!”

The recordings were licensed to Philips, who had already signed Kraftwerk to their catalogue, and it managed to sell a number of copies before it was withdrown. In years to come it would be rediscovered to gather a cult status among collectors and afficionados, with original copies nowadays changing hands for small fortunes.

This release from 1970 from the German group Zweistein epitomizes all the excesses of the 1960s experimental drug use and music creation, and that a major label ever released the three-record set is almost as baffling as the music on the record. A group that can barely play their instruments is let loose in the studio late at night, heavily saturated with effects, and allowed to release a sprawling three-LP opus charting the three stages of their LSD experience. Trip starts out with murmuring voices, clattering noises, other rumblings, and whirling noises that go on for several minutes before heavily distorted vocals begin to moan incoherently. Eventually a woman starts to croon, her voice heavily flanged as an equally distorted guitar gently plings slowly in the background. At times, the work takes on a musique concrète abstraction of electronic noises; other times, it veers everywhere, from a girl jabbering incoherently while a pop song plays on the radio in the background to a bunch of kids chanting and playing through heavy echo effects. There are some great creepy organ tones with cosmic whirs, and other excellent moments. Near the beginning of the Flipout disc, a toilet flush takes off like a rocket, and other parts of the record capture the acid trip experience almost as well as Brainticket's first album or Dom's Edge of Time. Other parts ramble on ridiculously, like the sped-up voices doing chipmunk babbling and laughter, or the sections that sound like something rumbling in the bowels of a sewer. Some prudent pruning could have culled this down to one amazing record, perhaps, but part of Trip Flipout Meditation's charm is the utter excesses of the project, in keeping with that era. Zweistein's masterpiece, which was deleted weeks after being released and has never been reissued on any format, may be severely flawed, but it is a fascinating document in its own right.

If hyper, hyper early Tangerine Dream were using tape machines instead of early analog synthesizers, it might sound like this. Maybe. It makes all the sense in the world that it's on that NWW list, seeing as how it's totally devoid of accessibility, pretentious, and foreign, but then you'll drag your boots through veritable inches of shit if you're gonna tackle that list anyway, so who knows. You don't want this if you're looking for psych, or krautrock, or rock, or music, or the concept of being engaged by what you're listening to. BUT if you're a connoisseur of freak albums, you oughta have this by now.