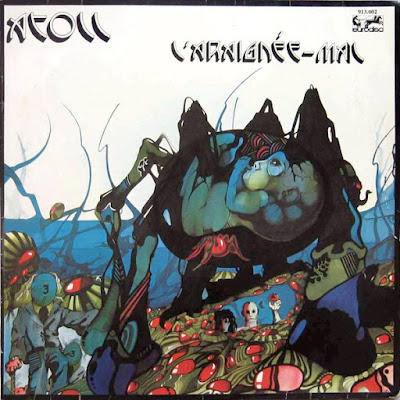 A jewel of French symphonic progressive. Luc Serra out, Christian Beya in, and the band were augmented by violinist Richard Aubert and second keyboardist Bruno Gehin (Gehin wasn't a band member anymore by the time they got around to recording their second album, but recorded with them anyway, presumably because he had played on the tunes live). It's Gehin who gives the album its real symphonic depth, adding Hammond, Moog and Mellotron to Michel Taillet's rather paltry rig (largely Hohner Clavinet and Eminent Solina).
Aubert's violin, oddly, adds an element of fusion to proceedings. The instrumental "Cazotte No. 1" is essentially a fusion piece, and one can hear touches of it on the lengthy, four-part title suite that covers the B-side of the original vinyl. Ditto "Le Photographe Exorciste", which is the band's lone foray into Ange-like theatrical prog. It tends to go a tad over the top, but does so with a style which can't be denied.

ATOLL was one of the brighter stars in the constellation of classic French '70s bands, and might be better remembered today if only they had been a little more productive. As it is, their reputation rests on only two albums produced over a five year period, the first of which was this 1975 release, in retrospect one of the pinnacles of French Progressive Rock and a highlight of the group's all-too brief career.
Certainly it's a dramatic improvement over their lackluster 1974 debut "Musiciens- Magiciens", with moments of real emotional power and instrumental urgency. The production may sound primitive by today's standards, and the mix is sometimes less than ideal (some of the solos are buried in a haze of dreamlike echo). But the music is undeniable ambitious, ranging from the romantic grandeur of "Le Voleur d' Extase" to the hair-raising nine-minute album opener "Le Photographe Exorciste, in which singer Andre Balzer's seductive whisper is gradually seized by an unearthly panic suggesting the more grotesque apparitions of an H.P. Lovecraft story.

Then there's the four-part title suite, a mini-marvel of passive/aggressive mood swings, from orchestral color to near-demonic pandemonium and back again. The track never once loses any momentum over its epic 21-minute length, and at the end of the final movement stops dead in its tracks, closing the album with all the finality of a pulled plug.

But what really elevates this LP above the pack is the addition of Richard Aubert on electric violin, giving the music a unique jazz-rock flavor lacking elsewhere in the ATOLL discography. A lot of heat is generated in his duels with guitarist Christian Beya, but make no mistake: this isn't genuine jazz-rock, however closely it may at times flirt with a fusion vocabulary.

I'm thinking of the track "Cazotten No. 1", a semi-improvised jam on which the rhythm section in particular doesn't sound entirely comfortable, although it may have been a question of studio inhibition. The Musea CD offers as a bonus track an earlier, live rendition of the song, with a guest saxophone player subbing for the violinist (who only joined the band a few weeks before the album was cut). The live version is twice as long, and played with an enthusiasm that apparently didn't quite survive the translation to the studio.

The album was a modest international hit (it was, if you'll pardon the expression, big in Japan), but that didn't stop the band from switching gears (again) for its next and last true Progressive album "Tertio" in 1977, and again two years later for "Rock Puzzle". It may have been a natural stylistic evolution, but the inconsistency didn't do their legacy any favors, especially since every next metamorphosis was in a retrograde direction.

The impression left by the exhaustive notes in the CD booklet is of a struggling young Progressive Rock band trying to find its voice amid the usual show biz frustrations of cancelled gigs, financial shortfalls, and an unstable personnel roster. This should have been their breakthrough album: the group even recorded an English language version several years later (quick translation: The Evil Spider), in a belated attempt to widen their appeal.

Thankfully, it was never released. But after nearly three decades the untarnished original can still be enjoyed in all its creative glory.
Posted by Zen Archer at 11:55:00 PM 1 comment: Links to this post 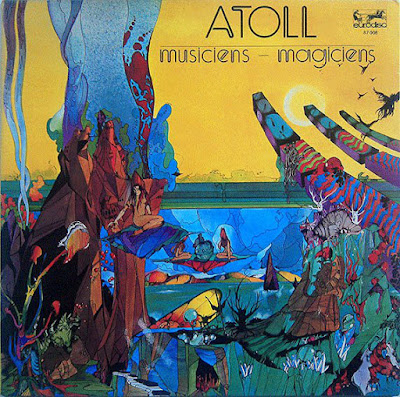 ATOLL were a talented French ensemble who very much carried their own symphonic sound blending the finer aspects of French comrades ANGE, PULSAR and MONA LISA. Next to ANGE, ATOLL were probably the most influential of the French symphonic groups. With this debut album "Musiciens-Magiciens", ATOLL led the way for the others with a wonderful progressively charmed album full of emotion and originality. Their style was very theatrical in nature offering dynamic and melodic arrangements with some great song writing and vocal harmonies. Musically "Musiciens - Magiciens" is directly in the GENESIS, YES, MAHAVISHNU ORCHESTRA and ANGE camp. The album is comprised of 7 tracks of early prog rock with an amazing 11 min epic track "Le Baladin Du Temps" which definitely is IMHO the defining moment on this album. An excellent album full of originality...!

"L'Hymne Medieval" is positively dripping with Mellotrons and rich bass, providing just the right kind of nostalgic feel that Genesis and King Crimson perfected. The early accellerando picks the piece up well, and the vocal harmonies soar, Queen-like. The only let-down is the lead guitar, which is just a little noodly and aimless. The structure is fairly basic, but well blurred, and a nice extension of the old song format.

Again, the Mellotron rings out for the 11 minute "Le Baladin du temps", which is full of vocal experimentation; melody lines that wind and twist into unexpected territory, soft harmonies and high falsettos make for a great dynamic range. A few intonation issues and rough production don't hurt this piece - the music continues in inventiveness through passages reminiscent of Yes and ELP, from the grinding, propelling bass with more than a nod and wink to Chris Squire to the scrunchy, angular harmonies so beloved by Keith Emerson. Yet this is not particularly derivative - there is a distinctly original flavour to the composition, although it does have the tendency to tread water and pop off at a tangent every now and again, which I find mildly annoying. Around 7 minutes, this piece starts to feel a bit long, and like ideas have just been crowbarred in - some of these ideas are cool, with mad rhythmic devices, but some are not so enjoyable - just filler until we get to the next bit, and the 3 minutes or so of ending feels overdone, even for symphonic Prog.

A funky blast kicks off "Musiciens - Magiciens" (next on my copy), which has a fantastic Yes-inspired bass riff, and is more a groovy song than a piece of Prog rock, but it's absolutely blinding in terms of solid groove energy and dramatic build-ups. Let down a bit by another weak guitar solo, but a killer choon - turn this one up to 11!

More Yes is evident in "Au-Dela Des Ecrans De Cristal" in the solid groove, but again, this extremely well done, with a lovely drop- down to Mellotron and bass around 2:50, and some nice keyboard and vocal textures - oh, and some great rhythms! I get a feeling of a Can influence here - the drummer is particulaly inventive and pulls out some very tasty licks. Not sure about the mad panning of the ride across the stereo picture though...

"Le Secret Du Mage" continues in much the same vein - another fantastic track, most strikingly, the vocals remind me of "Flash" by Queen.

At last, we get something a bit different in the intro to "Le Berge" - a classic Symphonic Prog sound with flute melody, then Monk- style "Ahhs", reminiscent of the superb "Tips Zum Selbstmord" by Necronomicon. This piece does feel somewhat familiar - but it doesn't matter too much, as, intonation and weak pentatonic scale issues in the guitar apart, it's very well executed and feels nicely developed. A very dramatic piece, almost Zeuhl in flavour.

"Je Suis D'ailleurs" has some nice synth work in the intro - and this is different again. While the first few tracks would have you place the band into a narrow, somewhat derivative soundscape, the latter half of the album really opens up into something different and more original. The band clearly feel more comfortable with grooves, and this 8 minuter settles into a Genesis- inspired groove pretty quickly - not a little unlike "Apocalypse in 9/8" until the bass cuts across with a "Squire special". Sadly, the guitarist chucks in some noodle over the top - but check out the rhythm section! A tribal beat cuts in, and the rhythms swirl all over the place, time getting mashed up in a hypnotic trance of polyrhythms. Some promising synth textures are sadly given way to an acoustic flavoured start to a new section (more like a new song idea), with nicely fluttering flutes reminiscent of Gong, that opens up to a symphonic flavoured section with a curious lead line that makes it sound like the Moodies with bagpipes. A beautiful slow groove is built up beneath it, but then drops away... amazingly, most of the short sections in this piece fit together in a logical way - the flow is not obvious, yet the pieces all work together to form a coherent whole in a modern jazz-like way. I'm even reminded a little of the Soft Machine here. Sadly, the piece just cuts off at the end, and we're left wondering what might have been.
Posted by Zen Archer at 11:47:00 PM 1 comment: Links to this post