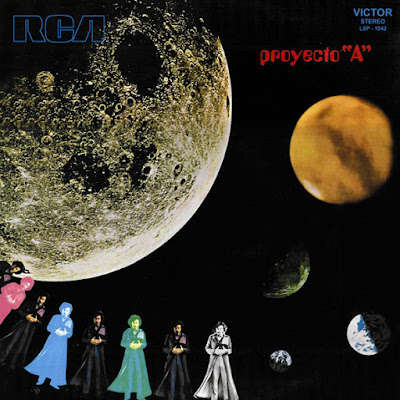 This reissue also includes the previously unreleased "Proyecto B" recordings from 1974, which were meant to be the second Proyecto A album. Recorded at EMI studios in Barcelona but never released at the time, this features Frank Dubé backed by Spanish prog band Iceberg plus sax / flute player Juan Mena (ex-Máquina and Eddie Lee Mattison Band).


Proyecto A was the brainchild of the great Frank Dubé from Barcelona. What can we say about him? A truly fascinating character: a pioneer of rock & roll and twist in Spain during the late 50s and early 60s, an accomplished accordion player, a showman, comedian, a Psychoaesthetics master…But he should also be considered as one of the first psychedelic pioneers in Spain due to his groundbreaking work on the Proyecto A album.

Frank started working on Proyecto A in 1969. Impressed by the moon landing, he wanted to create a concept album about the Solar System planets using tone scales and groove music so people could dance to it at clubs. He recruited some of the best studio musicians around and the result was delirious concept album fuelled by fuzz-wah guitars, powerful, crazy vocals, electronic & bizarre effects, Hammond organ, soulish horns, funky drums…

Due to the limitations of recording studios in Spain at the time, Frank had to create his own effects and sound effects for the album. He used a primitive Binson Echo unit, he recorded vocals through guitar amps, he used guitar effects on the keyboards, recorded with a portable microphone the sound of the beach, waves and TV sounds…

Proyecto A was released in 1971 housed in an amazing gatefold sleeve depicting all the musicians wearing strange & bizarre psychedelic outfits. The project was shrouded in mystery (Frank used pseudonyms for all the musicians involved) and for many years the Proyecto A album has been plagued with many false rumors and stories. We set the record straight with this, the first ever reissue done in cooperation with Frank Dubé.

This reissue also includes the previously unreleased Proyecto B recordings from 1974, which were meant to be the second Proyecto A album. Recorded at EMI studios in Barcelona but never released at the time, this features Frank Dubé backed by famous Spanish prog band Iceberg plus sax / flute player Juan Mena (ex-Máquina and Eddie Lee Mattison Band).

This will surprise anyone into Latin-Funk-Psych and Library / Cinematic sounds. Lots of killer flute, drumbreaks, Hammond, Fender Rhodes, electric guitar…Including tracks like the cosmic “Missatge espaial d’amor”, conceived by Frank as the soundtrack to the first sexual intercourse in space.

Josep "Kitflus" Mas' (ex-Iceberg, ex-Pegasus and usual contributor of Joan Manuel Serrat, among many others) first band. The band broke up after releasing this only album. He was 16 then. The following information has been provided by courtesy of Electrofuzzer of Sonidos En Órbita: "PROYECTO "a" is an album masterminded by Frank David, aka Frank Dubé. The names of the musicians involved are unknown (apart from Kitflus), since they all used pseudonyms. The album was recorded at the RCA studios un Madrid, yet most of the session musicians hailed from Barcelona. It was recorded in '69 and released one year later; in 1971 the single "A Plutón" (To Pluton) was released with alternative lyrics, replacing the word "Plutón" (Pluton) with "Putón" (whore or slut). In 1971 Frank David goes to Germany to make an electronic album called Blues And Electronics under the "The Frank David Selection" monniker, with Herb Geller and Okko Becker (of OKKO Sitar & Electronics fame) on the moog. The album was released on the defunct BASF label. 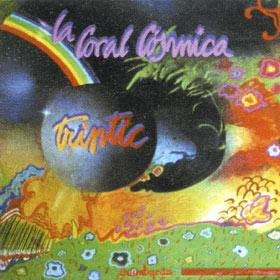 
This is most probably a lost gem of Spanish music from the 70's. And though not entirely Progressive in its core, it does have its interest for Spanish Prog Rock lovers. The music is mainly 70's pop with a strong folk flavor and some more complex structures, therefore the Prog connection. While the vocals are totally dated and almost entirely pop (exceptions are to be found, like in track 5, the instrumentation is crafted and thoughtful, gracing the listener with some very good musical moments. Unlike bands such as Triana or Mezquita, the folk components here presented are not exclusively based on the South (Seville) gipsy orientations. The interest here is undoubtedly focused on the music underneath the completely naif vocals, but in that department, the album does have its (very good) moments. 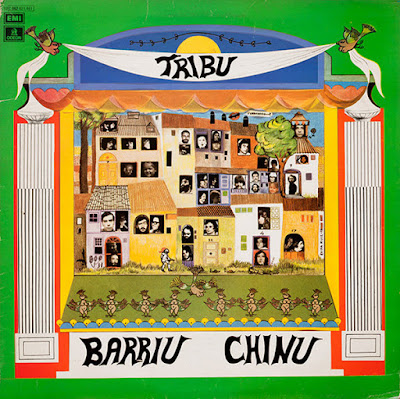 Spanish group, formed by ex-Fusioon and Pegasus talented drummer Santi Arisa.Tribu's music was very Latin- and Jazz-oriented, as captured on the debut album ''Barriu chinu'' (1978, EMI), featuring a large ensemble with Lluis Martí on bass, Maurizi Villavecchia on piano/accordion, Josep Durán on guitars, Ferran Saló on violin, Tita Soler on flute, Liba Villavecchia on winds and Josep Lluis Soler on trumpet/piano.Despite the long tracks and the heavy instrumental direction, it's not a very progressive album, split between Horn Rock and Latin Fusion, having an extremely tropical atmosphere to the point it becomes annoying, concerning Arisa's past both as a drummer and composer.It's mostly music for a shiny day on the beach with a cocktail in hand and you should choose a Mediterrenean one, especially after listening to the sound of mandolin.As expected, there are lots of percussion in here, still there are some nice moments of beauty, led by a tight and breezy Fusion style, supported by a few controlled but challenging interplays between guitar, violin and flute. Liba Villavecchia and Ferrán Solo also played with La Coral Cósmica. 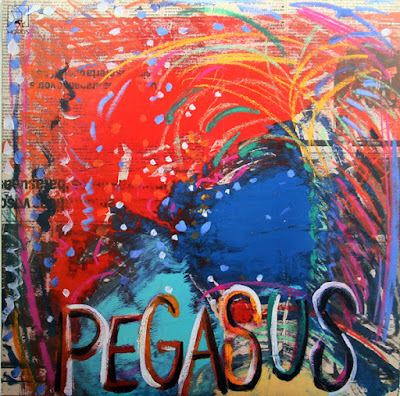 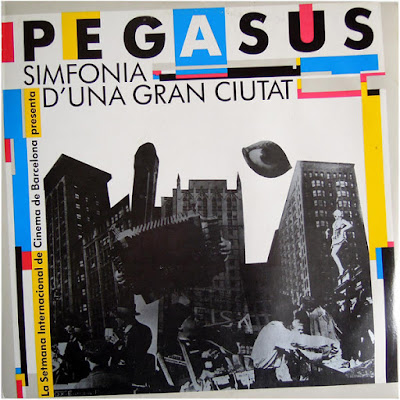 In 1986, the directors of the Barcelona International Setmana de Cinema commissioned the group PEGASUS the challenge of playing a silent film for its screening at the festival, the chosen film, "Berlin, symphony of a great city" directed in 1927 by Walther Ruttman , describes a day in the Berlin of the time through a succession of images of everyday life. This documentary shot in an innovative and modern way for those years, became a precursor of other films

The last day of the PEGASUS contest played the songs live at the Palau de Congressos de Montjuic while the film was shown, the work caused a great impact between the public and the press

Later they would repeat this show in other cities such as Bilbao, San Sebastian, Salamanca, Florence, Berlin, and even at the Miami Film Festival in 1987, in all the performances the group played with their backs to the audience and facing the screen, to follow the screening of the film.

The album "Simfonia d 'Una Gran Ciutat" is an extract of that soundtrack composed by PEGASUS, the rhythms of the songs are changing according to the different passages in the film, the calm dawn, the frenetic activity of the rush hour, the night cosmopolitan.
Posted by Zen Archer at 12:21:00 AM 1 comment: 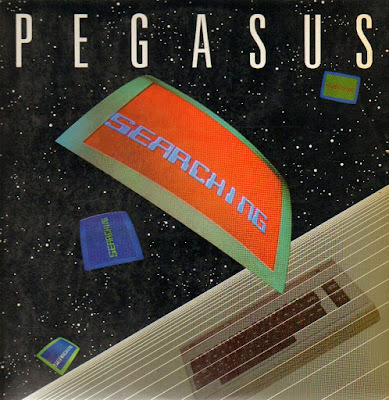 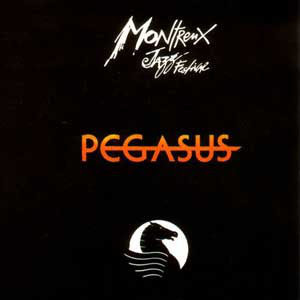 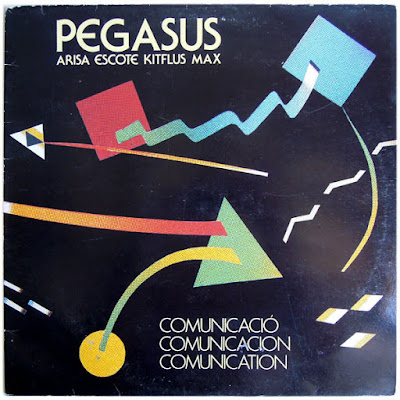 An album released in 1985 by the Spanish jazz rock group Pegasus, centered on Santi Arisa, a drummer who is also known to perform with Jordi Sabates, and a skilled guitarist Max Sune who has left many excellent works while using different . A4 with tight beats by synth drums, wet guitars and spacey synthesizers, and a resonant running bass reminiscent of Vangelis and Logic System, the mysterious Cosmic Jazz Groove B4 brings electronics to the fore. A nice one with a nice jazz fusion. An original Spanish edition released from an independent label
Posted by Zen Archer at 12:03:00 AM 1 comment: