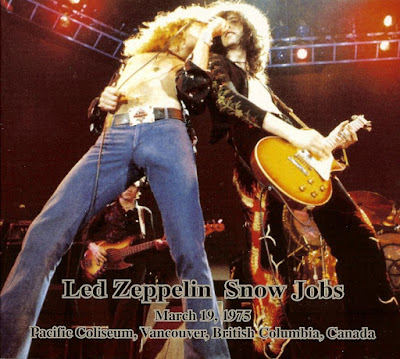 The tremendous excitement for the April 8th release of Snow Jobs on Empress Valley ran on several different levels. First and foremost it is a brand new, uncirculated soundboard recording from the 1975 US tour. Any new soundboard is exciting, but the track record for the boards from this particular year from Earl’s Court, New York, St. Louis, Dallas and San Diego is very strong with a lively and well-balanced sound.

Like St. Louis a fair to good but incomplete audience source has circulated before, but Snow Jobs promised the complete show with the missing encore. And finally, Zeppelin’s trip to the great northwest to Seattle and Vancouver produced some of the strangest and most exciting and enjoyable shows from this inconsistent tour. This is the era where Zeppelin played some of their longest (some say self indulgent) with “No Quarter” and “Moby Dick” routinely reaching the half hour mark and “Dazed & Confused” at its longest reaching forty minutes.

For all these reasons the arrival of this soundboard, the latest in Empress Valley’s “soundboard revolution”, is one of the best releases on this label and certainly the best Zeppelin release so far this year. The soundboards from 1975 sound so much better than the 1973 ones and it has been speculated because they used reel-to-reel tapes instead of cassettes.

Whatever the case may be, this has wide separation with a great balance between instruments and ambient audience noise. John Paul Jones’ bass is higher in the mix compared to the other 75 boards, but not overwhelming nor distorted but provides great counterpoint to Page and Bonham making this a fascinating listen. One of the functions of the bass is to elicit a visceral reaction to the music and this soundboard is an excellent example of that effect.

Snow Jobs is the first time this concert has ever been released on its own. The audience recording has been released three times and each has been in expensive and hard to find box sets paired with the following night’s tape.

This release has caused many to pay more attention to this show and give a re-evaluation as one of the best nights on the tour with particular attention upon the developing epics. Both “No Quarter” and “Dazed & Confused” were truly places for on-stage experimentation by the band. Sometimes, like “No Quarter” in the preceding show in Seattle, really goes nowhere. But on this night the improv comes together very well with Page in a very abstract mood.

“Dazed & Confused” is similarly very experimental with Page extending the soft transition into “Woodstock”. He falls a bit right after the violin bow solo hitting upon a theme that really goes nowhere before hitting upon the bombastic notes signaling the beginning of the “Dazed & Confused” solo. Later in the piece he plays call and response games with Bonham at about the half hour mark that is interesting.

The encores, which have never been heard before, are standard for this tour. There is an almost full version of “The Crunge” played with Plant hitting some high notes. The jamming after the theremin bit becomes so intense that Plant tries to lead the band into James Brown’s “Lickin’ Stick” (“Mama, come here quick” is as far as he gets) but wisely gets out of the way of Bonham who is thrashing the hell out of this drum kit before leading the band into “Black Dog”.

The first three hundred copies came with two unnumbered bonus discs with the incomplete audience source. This was released before on Physical Vancouver Farewell (Tarantura PV-001~6), Ladies And Gentlemen (Sanctuary TMOS-97501-6), and Prisoners Of Rock And Roll (TDOLZ Vol. 92 & 93). EV sounds more compressed and constricted compared to the Sanctuary release. It contains the same cuts and is missing “Stairway To Heaven” and the encores.

It comes packaged in a single cardboard sleeve. The focus of Snow Jobs is all on the excellent soundboard recording so the bonus discs are a nice touch but far from essential. To say this is worth having is an understatement. The interest and discussion about this release has catapulted it already into the legendary status and is a must own.
Posted by Zen Archer at 5:12:00 PM 2 comments: Links to this post