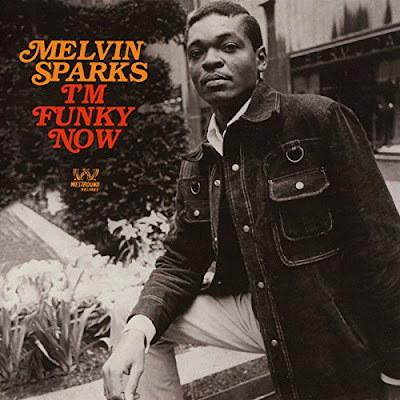 Previously unreleased 1976 album by the master guitarist. A lost gem from the Westbound vaults.

A never-issued album by funky guitar legend Melvin Sparks – recorded right after his final record for the Westbound label, and appearing here for the first time ever! Sparks first rose to fame via funky work with Lonnie Smith and Lou Donaldson in the late 60s, the cut some killer albums of his own and with organist Leon Spencer in the 60s – before disappearing a bit until a great revival in more recent years! This set represents Sparks right before he dropped off the map – a session that's done with a sweet jazz funk vibe that shows the way that labels like Westbound were picking up some of the style of the successful CTI/Kudu imprint – mixing some larger charts with the leader's solo strengths – allowing maybe some more soulful influences in the rhythms, while still going for a jazz funk approach overall. The set's much more instrumental than Sparks' last record for Westbound, which had more vocals – and although a few tracks have an upbeat clubby style, most of the music is more in a midtempo mode. Titles include "Love Tones", "I'm Funky Now", "I'm Gonna Funk You Up", "You're Gonna Make It", "The Truth Hurts", "Make It Good", and "Disco Booty".

While many record companies would’ve called time on Melvin Sparks’ career, Westbound Records allowed him to record I’m Funky Now. It featured seven tracks, including the Melvin Sparks’ composition Disco Booty. Even Melvin Sparks had decided to jump on the disco bandwagon. He knew his career was at stake, and had to climb onboard the disco bandwagon. The other six tracks on I’m Funky Now were Sam Kennedy, Lulu Laurent and Cole Simon, and recorded by a talented and versatile band.

Very little is known about the band that played on I’m Funky Now, but it’s thought that some of the musicians were from the Funkadelic and Parliament family. They were able to seamlessly switch between musical genres, as Melvin Sparks embarked upon a musical adventure. Over the seven tracks, Melvin Sparks and his band flit between soul-jazz to disco, jazz-funk, funk and jazz. It was an album that hinted at previous albums, but saw Melvin Sparks’ music moving forward in search of commercial success.

I’m Funky Now opens with the über funky and dancefloor title-track. It gives way to Disco Booty where Melvin Sparks embraces disco and combines it with funk on what should’ve been a favourite amongst DJs and dancers. Make It Good finds Melvin Sparks’ scatting as he and his band lock into a groove, before he embarks upon a  musical duel with the horn section. All the time, the rhythm section keep things funky, as Melvin Sparks unleashes a musical masterclass. It’s all change on Love Tones, where the tempo drops and a much smoother, dreamy and jazzy sound emerges. It was meant to close side one.

On The Truth Hurts, the rhythm section lay down mid-tempo beat before the horns and Melvin Sparks’ guitar play starring roles. You’re Gonna Make It is a laid-back, genre-melting track where Melvin Sparks and his band combine elements of funk, proto-boogie and jazz. Melvin Sparks is responsible for much of the jazzy sound, when he lays down a fleet fingered guitar solo.  I’m Gonna Funk You Up, which features a vocal from Melvin Sparks, marks a return to the über funky dancefloor friendly sound of the title-track, which bookends I’m Funky Now.

With the help of a tight, talented and versatile band Melvin Sparks had recorded an album that he hoped would appeal to his old fans, and also the legion of record buyers that had embraced disco over the last couple of years. DJs and dancers would’ve been won over by I‘m Funky Now, Disco Booty and I’m Gonna Funk You Up. Melvin Sparks hoped that tracks like Love Tones and On The Truth Hurts would appeal to his old fans, who had followed his career since his 1970 debut album Sparks!

With the I’m Funky Now completed, the album should’ve been released later in 1976. However, Melvin Sparks and his fans were in for a nasty surprise.

Westbound Records must have lost money on Melvin Sparks’ first two albums, which failed commercially. To make matters worse, Eastbound Records had closed its doors just after the Texas Twister in 1973,  and maybe Westbound Records weren’t willing to take chances on albums that may not make them money? That was despite Funkadelic and Parliament releasing albums that were certified gold and silver. Maybe when it came for Westbound Records to decide whether to release I’m Funky Now, caution got the better of the executives that ran the label. They decided to pass on I’m Funky Now, which had the potential to launch and transform Melvin Sparks’ career.

Sadly, it wasn’t to be.  After Westbound Records decided not to release I’m Funky Now, the Texan guitarist left the label.  For Melvin Sparks it was the end of an era, and he didn’t release another album for five years.

Now some forty-one years album Melvin Sparks recorded I’m Funky Now, Westbound Records, which is now an imprint of Ace Records, have issued this long-lost hidden gem of an album.  I’m Funky Now is an opportunity to discover another side of Melvin Sparks, and album that had it been released in 1976, might well have transformed the Houston born jazz guitarist’s career
Posted by Zen Archer at 1:21:00 AM 3 comments: