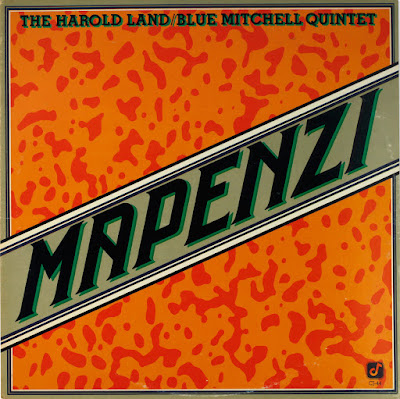 I certainly don't need to sell the outsize talents of Harold Land to loyal readers, his early work with the Clifford Brown/Max Roach Quintet, as well as his later partnership with Bobby Hutcherson, has the tenor firmly on the radar of most jazz aficionados. The same can be said for Blue Mitchell, whose output as a leader and sideman on Blue Note, including his tenure with the 1958-1964 version of The Horace Silver Quintet, also makes him a favorite of hardcore jazz fans. Amazingly, the two legends never recorded together before Mapenzi, a record that came about when the two men formed a bond during an all-star big band jazz tour of South Africa in 1975. Prior to recording Mapenzi the newly formed quintet played regularly for nearly two years before hitting the studio, and the rapport of all involved is rock solid, resulting in an immensely enjoyable post bop record.

Harold Land's lyrical grace on the tenor is the perfect match for Mitchell's fluid phrasing on the trumpet, and both men's style is a perfect fit for the post bop they laid down on wax in 1977. This was still the era of soft fusion and electric jazz, and the musicians are clearly having a blast laying down some classic jazz licks during a time that the commercial leanings of the jazz world was primarily fluff and easy listening. Besides Land and Mitchell, both of whom shine, Kirk Lightsey deserves some special attention for both his playing and a couple of his compositions on the album. "Habiba" is a Lightsey tune that is not only the longest track on the record, but also happens to be the highlight of the proceedings. The group is on fire, and Lightsey's playing is truly electric. It should also be noted that bassist Reggie Johnson had some history with Land, he played alongside him on some of the classic Land-Hutcherson collaborations LPs (Total Eclipse, Head On, Medina, Spiral) and the two men clearly have a musical connection. Listen to how Johnson's bass lines mirror the melody of the horns on another of the album's highlights, the Land composition "Inner Voice," a great opportunity for the bassist to shine. The track also reflects the vibe of the album as a whole, this is a true group effort where all the players contribute equally, a result - no doubt - of the lessons learned by Mitchell and Land through their time spent playing with a couple of the most legendary jazz quintets to emerge from jazz's golden age.

Many jazzers in the ’70s donned shell-suits, gold lame pants, powered up the synthesisers and crossed over to fusion or soul-jazz. It’s never wrong to just try earn a living.  Land  continued to demonstrate his deserved place as one of the best tenors of the period, keeping alive the legacy of hard/post bop updated with contemporary influences. It is a living genre.

Latin-influenced and afro-centric melodies and harmonies stretch out in this hugely listenable album, which Land and Mitchell populate with intricate arrangements. Blue Mitchell, once mainstay of Horace Silver Quintet, partners Land’s tenor perfectly, whether in unison or harmony. Mitchell recorded widely with Junior Cook, my favourite Mobley-soundalike, so the empathy here between trumpet and tenor as all the more telling.

This album gets repeated plays since landing on the turntable, always a good sign, every track is a delight. It also proves me wrong, modern jazz didn’t end in the ’60s. There is more good stuff to be found, if you know where to look.