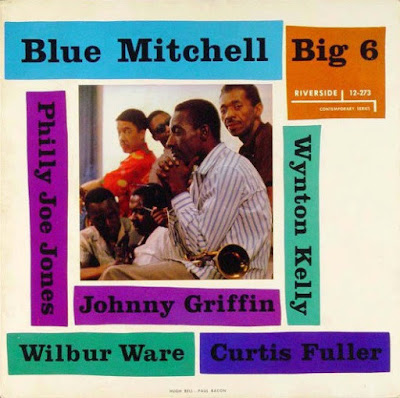 Mitchell took the nickname “Blue” in high school. Mitchell’s mother reportedly hoped to have a musician in the family, but her son only took up the trumpet to join his high school band at age 17.

The teenaged trumpeter came into music during the dawning days of bebop: he cited Dizzy Gillespies Shaw ‘Nuff, recorded in 1945, as an early influence, but he credited Dick Smothers, a Miami trumpeter and bandleader, as the inspiration for the lyricism that became his signature.

Like most young jazz musicians in the late forties, he idolized Charlie Parker and Dizzy Gillespie, and began to play their tunes with bassist Sam Jones in a Miami Beach club, Jones and Mitchell would make six recordings together, including Something In Common, two years before Blue’s death.

While playing with a group in Tallahassee in 1948, Mitchell met saxophonist Cannonball Adderley. At this time, Mitchell worked primarily with rhythm and blues bandleaders, such as Paul Williams, Earl Bostic, and Chuck Willis. In Bostic’s band, he met Benny Golson, with whom he would later work closely.

Later that year, Mitchell returned to Miami, where he auditioned for Riverside Records producer Orrin Keepnews, who signed him to the label. He moved to New York, where he recorded Portrait of Cannonball, and began to record as a leader.

Big 6 (1958) is the first of Mitchell’s albums for Riverside. On these tracks, Mitchell stays mostly in the middle of his register, demonstrating an impeccable sense of time on heartfelt and straightforward ballads. Big 6 includes fine work by trombonist Curtis Fuller, a member of Art Blakey’s Jazz Messengers, drummer Philly Joe Jones, and tenor saxophonist Jimmy Griffin.

Mitchell’s lyricism was rounder and more restrained than that of Clifford Brown, the leading trumpeter of bebop’s second generation, who died in 1956 at age 25. Brown set the example for virtually every trumpet player in Mitchell’s generation, including Lee Morgan, Bill Hardman, and Donald Byrd, who sought to combine the virtuosity of early bebop with the listenability and soulfulness of rhythm and blues.

In 1958, Mitchell also joined pianist Horace Silver’s quintet, where he stayed until 1964. Mitchell was definitely right for the group: his lyricism complemented Silver’s simplified, sometimes whimsical heads, on tunes such as the easy-going Strollin’ and the light, shotgun-tempo Nica’s Dream from Horace-Scope. He was generally at his best in a relaxed setting, and on ballads. He was also a perfect foil for tenor saxophonist Junior Cook, who shared his sense of melody.

Mitchell learned from Silver’s Cape Verdean-influenced repertoire and high standards for sidemen. Silver recorded only two albums a year, and set a high bar for his sessions. Mitchell followed this example with his own groups.

Pianist Wynton Kelly played with Mitchell on almost all of his Riverside sessions. Kelly also appears with eighteen-year-old trumpeter Lee Morgan on I Remember Clifford. Benny Golson’s elegy for the trumpeter who inspired their generation.

Overall, Mitchell’s four years with Riverside solidified his talent, and gave many of his young contemporaries opportunities for studio work. A number of them – Cedar Walton, Benny Golson, Curtis Fuller, and Horace Silver – belonged at different points to The Jazz Messengers. Blakey’s group was an incubator for some of the era’s best young jazz talent, without whom the Riverside recordings would not have been possible.

In 1959, one month after Miles Davis released Kind of Blue, Mitchell recorded Blue Soul for Riverside, adding Jimmy Heath on tenor saxophone and his old friend Sam Jones on bass. Mitchell picked up some of Davis’s figures on the uptempo Minor Vamp, which is nicely punctuated by tight kicks from Jones. His technique on this album has noticeably improved, with upper register notes and “sung” ballad lines played confidently.

In 1960, Mitchell departed from his intimate quintet setting to record Smooth as the Wind, orchestrated for trumpet and strings and conducted by Benny Golson. He later admitted that the session was nerve-wracking for him, possibly because of the size and orchestration of the band, and plays less evenly than on other albums. He does however do justice to the two Todd Dameron tunes on the record.

In 1962, Mitchell took his companions from Silver’s band – tenor saxophonist Junior Cook, bassist Gene Taylor, and drummer Roy Brooks – into the studio with pianist Cedar Walton to record The Cup Bearers for Riverside. On these tracks, his timbre is lovely, whether on the light swing of Why Do I Love You? or his bittersweet reading of How Deep is the Ocean, one of his finest recorded ballads.

Mitchell left Silver in 1964, then recorded The Thing To Do for Blue Note, his first session as a leader for the label. The album’s tracks, which include the young Chick Corea’s nimble and adventurous solo on the calypso-like Fungii Mama, were refined and tightened in eight separate performances before they were recorded. “I got that from Horace,” Mitchell said.

Mitchell’s albums in the late sixties and early seventies for Blue Note and Mainstream moved into soul jazz, perhaps trying to keep pace with the era’s listening public. The output was uneven, but his albums with alto saxophonist Lou Donaldson stand out, among them Midnight Creeper, with George Benson, recorded for Blue Note in 1968.

After leaving Blue Note, Mitchell freelanced. He toured from 1969 to 1971 with Ray Charles, and then from 1971 to 1973 with guitarist John Mayall. In the mid-seventies, he did dates with the big bands of Louis Bellson, Bill Holman, and Bill Berry. He also soloed with Lena Horne and Tony Bennett, and worked with tenor saxophonist Richie Kamuca.

It is perhaps fitting that Mitchell’s last work was with the hard-driving, Coltranesque Harold Land/Blue Mitchell Quintet from 1975 to 1978, with whom he recorded Mapenzi in 1977. It was the next step forward from the hard bop sound he loved, and helped shape.

Jimmy Heath perhaps sums up best how many musicians felt about Mitchell: “I think Blue Mitchell was one of the most melodic players of his generation.”
Posted by Zen Archer at 12:03:00 AM 1 comment: