Archie Shepp And The Full Moon Ensemble - 1971 - Live In Antibes

Archie Shepp And The Full Moon Ensemble
1971
Live In Antibes 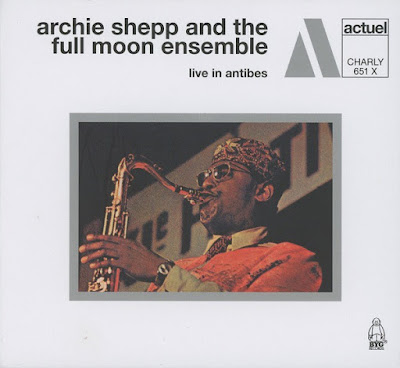 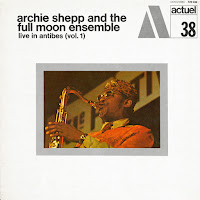 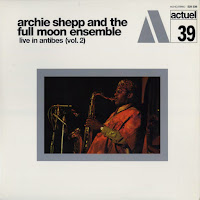 Like many saxophonists and jazz musicians in general, Archie Shepp moved to New York City in 1959 in search of becoming a professional musician. Things moved slowly, but by 1965 he had performed with pianist Cecil Taylor and had made the acquaintance of several musicians in the burgeoning free jazz or "new thing" cadre. Most importantly was his relationship with the great saxophonist John Coltrane who recommended him for Impulse Records. Shepp recorded for about a decade with Impulse, but also for other labels like BYG/Actuel which released this concert featuring Shepp on tenor saxophone, piano and vocals, Clifford Thornton on trumpet and piano, Alan Shorter on flugelhorn, Joseph Dejean on guitar, Beb Guerin on bass and Claude Delcloo on drums. The album is taken from two concerts at the French jazz festival in 1970 with "The Early Bird: Parts 1 and 2" on the first disc and then "Huru: Parts 1 and 2" on the second disc. The music is very wide open and seems use piano as its anchor, with either Shepp or Thornton laying down massive slabs of dark keyboards that lock in with the deeply percussive bass and drums to give the music a haunting and hypnotic effect. Shepp takes a lengthy saxophone solo on "Huru: Part One" where he ranges from deep guttural moans to high energy squalls and howls. "The Early Bird" he incorporates vocals and shouts from his composition "Mama Rose" into the overall fabric of the performance. This is a very interesting and freewheeling set of music. It is a fine example of the way that jazz had evolved in the early 1970's. Incorporating elements of African music as well as the past and present in jazz, it makes for compelling listening.

A seminal live set from tenorist Archie Shepp – and some of his freest, least-structured material ever! Shepp's still a righteous force here on his horn, but there also seems to be equal emphasis on the contributions of all members of the group – woven together in a really rich tapestry of sound, but with less of the structuring righteous concepts of some of Archie's other work – especially his sides for Impulse. Shepp had really been experiencing some new freedoms on the French scene of the late 60s – even more so than in the US avant outfield – and you can definitely hear him taking flight here, with a like-minded group of players
Posted by Zen Archer at 11:50:00 PM 2 comments: Links to this post 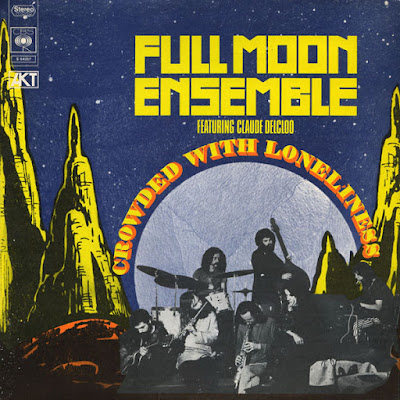 A French Free Jazz Band, the Full Moon Ensemble was born at the end of the 60s under the leadership of the versatile and ubiquitous Claude Delcloo. Delcloo was an eminent drummer who played and recorded with Jazz legends such as Archie Shepp, Arthur Jones, Jacques Coursil and Burton Greene. He was also a smart producer and the co-founder of the Actuel/BYG and AKT labels which helped release timeless underground, progressive Jazz records by some of the most creative young talents living in France back then (Grachan Moncur III, Art Ensemble Of Chicago, Sun Ra Arkestra, Moving Gelatine Plates, Rhesus O, Cane & Able, etc.).

At the end of 1970, Delcloo's ongoing project, the Full Moon Ensemble, recorded Crowded With Loneliness - their only album - with guitar player Joseph Dejean (also a member of the Cohelmec Ensemble), horn players Jeff Sicard and Gerard Copper (who later also played with Dharma Quintet and Machi Oul), pianist Martine Tourreil, American bass player Ron Miller and the enigmatic singer Sarah Touati who disappeared early on. They were also later credited on one of Archie Shepp's live LPs released on the BYG label (volumes 38 and 39) but only their rhythm section was featured. The Full Moon Ensemble was a free-minded collective project that sounded more like Pharoah Sanders and the early 70s American politically-engaged Spiritual Jazz scene than any other French Jazz bands of that time (even though Francois Tusques, Jef Gilson and a few others did remarkable works during those years). Most of the lyrics as well as the album title were inspired by US poet Bob Kaufman; this helped give these recording sessions such a unique style between Jazz poetry, vocal Free Jazz or protest Jazz. Sadly, after a few gigs in France and confronted with a lack of commercial success, most of the Full Moon Ensemble members left for other bands and projects, leaving behind Crowded With Loneliness as a testament of their collective work.

Up until now, this album has been one of the French holy grail records in Spiritual Jazz collectors circles, mainly owed to the track Samba Miaou which appeared in several compilations over the last 20 years but never in its entire form. Superfly Records are now proud to make this record available again in its original format for the first time in more than 30 years.

When Free Jazz meets the Beat generation in a great Spiritual Jazz session recorded in 1969, performed by the Full Moon Ensemble, and featuring the avant-garde drummer Claude Delcloo. Best known as the group of Archie Shepp, during his live performance at Juan Les Pins Jazz Festival in 1970, Full moon Ensemble was formed by Joseph Déjean & Claude Delcloo, the main composers for the group. Claude Delcloo is also known as the founder of BYG Records & Actuel magazine, champion of counterculture in the late sixties in France. Deeply influenced by John Coltrane & Pharoah Sanders's compositions, the collective plays progressive jazz associated to some protest music based on esoteric poetry from american poet Bob Kaufman.
Posted by Zen Archer at 11:06:00 PM 3 comments: Links to this post 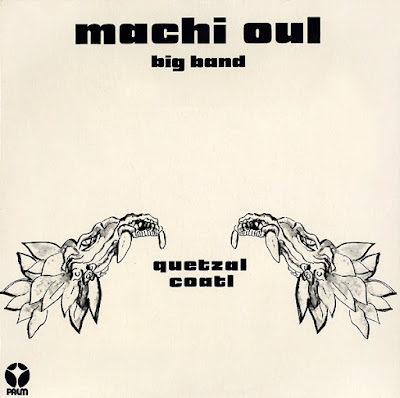